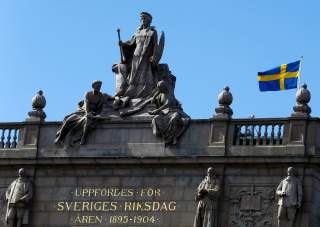 On September 9, Swedes go to the polls to select their next government. The Swedish economy is strong, the government’s finances are in good shape and most Swedes are at ease with their country’s membership with the European Union (EU). The election, however, is shaping up to be portentous as a Eurosceptic party, the Sweden Democrats (SD), is likely to emerge as a political kingmaker in the formation of the next government. In many regards, the Scandinavian country’s election must be observed as part of a long line of electoral tests that are reshaping Europe’s democracy from more traditional left-right politics to politics more narrowly defined by nationalism, populism and immigration.

The challenger to the Swedish political order, the SD, was founded in 1988. Its ideological origins are nationalist, neo-Nazi and white supremacist, though the party has moved from those founding concepts throughout the 1990s. Despite the political cleanup, most Swedes regard the SD as far right, anti-immigration and Eurosceptic. The party favors a referendum on Sweden’s membership in the EU (unless that body reforms it will push for a Swexit), tighter immigration controls and better law and order measures to curb rising crime.

Under the leadership of Jimmie Akesson, who took charge of the SD in 2005, the nationalist-populist party culled openly extremist members and worked harder to appeal to more moderate audiences. This approach proved successful as the SD won enough votes to cross the 4 percent hurdle necessary for parliamentary representation in the 2010 election, capturing 5.7 percent of the vote and gaining twenty seats.

In the 2014 elections, the SD won close to 13 percent of the national vote and captured 29 seats. It also elevated the SD into the position as the country's third largest party behind the center-left Social Democrats and the center-right Moderate Party. In the aftermath of that election, the Social Democrats formed a minority coalition government with the Greens, which was given some degree of passive support from the right and center-right parties, who refused to work with the SD and preferred to avoid new elections which would possibly give the far right party more seats.

The problem for Sweden’s other parties is that the SD is set to make further gains in the September 2018 election. Opinion polls indicate that the SD will finish among the top three parties, possibly ahead of the Moderates. Some analysts have said that the party could even come in first. At the same time, there is considerable speculation that the Social Democrats are set for their worst showing in decades. Opinion polls indicate that the Social Democrats are set to fall well below the 31 percent they received in 2014, probably around 25 percent of the total vote. There is a strong chance that Sweden’s next government will not include the Social Democrats and the SD will have more influence than ever before.

How did Sweden arrive at this point? Throughout most of the period following the Second World War, the Social Democrats have been the country’s dominant political party and are given credit for the introduction of one of the world’s most advanced social welfare states, known for its generous unemployment benefits and social programs. The system was helped along by a supportive and broad political consensus as well as little official corruption. Sweden’s high level of economic development and the strength of its corporate sector allowed the Social Democrats and others to maintain the comprehensive welfare state through the twentieth century and into the next.

There have been periods where the welfare state was reformed because of high taxes, the migration of capital to tax havens and structural changes in the business sector. A major political watershed came in 1976 when the Social Democrats were voted out of government for the first time in forty-four years to a backdrop of economic recession. Although the Social Democrats would regain power, they found themselves occasionally out of power and sharing the national stage with three to four center and center-right parties (Moderate Party, Centre Party, Liberals and Christian Democrats), who pushed to lighten the hand of the state on the economy and reform the benefits system (though not abandoning it).

In 2014 the Social Democrats, along with the Greens and with support from the Left Party, returned to office under the leadership of Stefan Lofven. Throughout the Lofven government’s tenure, Sweden has enjoyed strong economic growth, a decline in unemployment (especially when compared to most other EU countries), and solid government finances. However, the Social Democrats were to stumble on immigration, much like their counterparts in Germany and Italy. The Social Democrats were not alone on this—with the exception of the SD, Sweden’s mainstream parties have cast immigration in a positive light. Considering the country’s low population birth rate, immigration has served as a means to meet labor shortages and keep the country’s economy competitive.

Swedish perceptions of immigration changed, however, when the country faced a massive inflow of asylum seekers starting in 2012 and peaking in 2015. In 2015 alone, Sweden received 163,000 asylum seekers, more relative to its population than almost any other European nation. Most of the newcomers were non-European, with large numbers from Syria, Iraq, Iran and Somalia, most of which were Muslim.

The massive influx of migrants stretched Sweden's social system and build up resentment in some quarters that the Social Democratic government was more interested in spending money on the newcomers than the local-born population, many of which are pensioners and dependent on the state's health care system. In addition, crimes committed by immigrants, including the terrorist attack in 2017 by an Uzbek asylum seeker using a truck that killed five, have helped cast migration in a more negative light. Although the Social Democrats tightened migration considerably after 2015, the damage was done to the party's standing. The situation has been made worse by rising levels of crime—some of it violent (car burnings and grenade attacks). Furthermore, crime has been gang-related and often occurring in big cities in areas with large immigrant populations.

In an IPSOS poll conducted in August 2018, 44 percent of Swedes listed health care as their top concern. The second concern was education (26 percent). However, if immigration (listed third at 25 percent) and integration (listed fifth at 15 percent) are taken together, the major issue is immigration policy and how to integrate newcomers into Swedish society.

The SD, which has consistently been negative about immigration, has found its message received by a growing audience. In the 2010 election, the party successfully ran an ad that shows a Swedish pensioner walking slowly towards the government budget, but he is outpaced by a group of burka-clad women pushing baby carriages. The SD doubled its vote in that election, indicating that the fear factor is clearly at work in the country’s politics (as it is other EU countries and the United States).

The SD solution is tighter immigration as well as a stronger effort at integrating migrants into Swedish society. If the migrants want to stay, they need to become Swedish, assuming a commitment to learn the language and a willingness to adopt the prevailing cultural norms. If they don't want to accept Swedish cultural norms and language, they will leave.

Although the SD is not likely to form the next government, it could well gain enough votes to be the kingmaker in Swedish politics. Both the center-left and center-right blocs of parties are expected to gain around 40 percent of the vote each; enough to give one side the largest bloc of seats, but well shy of an outright majority. That leaves the SD with at least 20 percent of the vote and a sizeable bloc of seats in the parliament.

While most Swedish parties have indicated they would have nothing to do with the SD, the next government is likely to be another weak coalition, possibly a minority administration, dependent on other parties that do not join it in office. Could the center-right opt for the passive support from the SD for tougher immigration policies? Or will Sweden opt for a Grand Coalition as in Germany, between the Social Democrats and the four major centrist parties? Such an arrangement would avoid any dependence on the SD, but would a Grand Coalition government be able to agree on policies and be effective?

The Swedish election will serve as a bell-weather for Europe’s changing politics. It follows a series of electoral contests in 2018 that have included the Netherlands, Germany, France, Italy and Austria—all of which witnessed strong challenges by far-right nationalist-populist parties and two cases in which those parties achieved power. Sweden is not likely to see such a dramatic outcome, but a strong showing by the SD will indicate that the drama of radical political change in Europe is hardly over and that the political thunder on the far right is not a passing fancy.