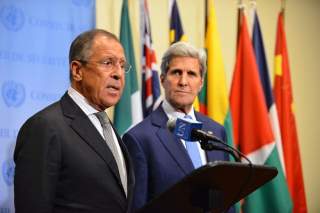 The collapse of the latest Syrian cease-fire is no surprise. Indeed, most observers had been pessimistic about the deal holding before it came into effect on September 12. Following the pattern of previous failed attempts to implement a cease-fire, the first week witnessed accusations and counter-accusations of violations from all sides, before eventually falling apart. The Russians and Americans were already accusing the other of failing to respect the deal before the deadly U.S.-led strike on Syrian government forces on September 17—Washington said it was an accident, while the Russians aren’t buying it. By the next Monday morning, Russia’s defense ministry said it was “senseless” for the Syrian government to continue observing the cease-fire, which led to the regime announcing the end of the cease-fire later that day. The attack on the aid convoy that Monday night—U.S. officials accuse Russia of being behind the strike—delivered the death blow to the deal, since aid delivery to rebel-held areas was a U.S. condition of the agreement.

Despite reassurances Tuesday from American, UN and Russian officials last week that the “cease-fire is not dead,” it is hard to see how it will be resurrected, and if so, how it will endure. None of the belligerents on the ground seem to be in the mood for a cease-fire—President Bashar al-Assad vowed to reconquer the entire country hours before the cease-fire went into effect—and their foreign backers have shown little interest in stabilizing the conflict. The latter is the key reason for why this cease-fire has followed all other attempts into the dustbin.

Secretary of State John Kerry and Russian foreign minister Sergei Lavrov may have given the impression they were working at lengths to produce a sustainable cease-fire deal—they’ve been in talks all year—but the reality is that neither the United States nor Russia have wholly invested in this endeavor. The cease-fire deals they continue to conjure are patchy at best, and doomed to fail from the outset. Below are several reasons why.

This is the key ingredient to making a cease-fire work: ensuring belligerents comply with the cease-fire and enforcing it via punitive measures should any actor break it. This was a clear factor that caused the collapse of the previous U.S.-Russian cease-fire attempt in February, and this month has felt like déjà vu. The September deal called for a demilitarized zone on Castello Road in Aleppo, the main artery that enables access to rebel-held eastern Aleppo. But the enforcers of this demilitarized zone were Russian troops—a main protagonist in the war and by no means an independent arbiter. The troops, unsurprisingly, came under occasional fire. Despite Russia and other regional actors, such as Turkey and Iran, holding significant sway over rival parties to the conflict, no mechanism was devised to punish actors who violated the cease-fire. Thus, foreign powers’ commitment to the cease-fire was always tenuous at best. An effective cease-fire would include punitive measures against violators, and an effective enforcement mechanism in the form of joint international forces under a UN umbrella.

2. No leverage over spoilers.

Foreign powers hold influence over key belligerents in the war, but several actors remain outside of their control and have the capabilities to spoil cease-fires—most notably Al Qaeda’s affiliate Jabhat Fatah al-Sham, and ISIS. The former’s growing ties with Syrian rebels in Idlib and Aleppo is rendering cease-fire attempts difficult to implement. Both Washington and Moscow called on Syrian rebels to distance themselves from the Al Qaeda affiliate as part of the agreement, and possible joint U.S.-Russian operations against the terrorist branch were the main motivation behind the latest cease-fire deal. The Al Qaeda affiliate thus has every interest to derail any cease-fire deal that would ultimately target it. If Syrian rebels continue to coordinate with Jabhat Fatah al-Sham—or rather, if there is no incentive for Syrian rebels to abandon their coordination with Fatah al-Sham—it is going to be increasingly difficult to implement a cease-fire on the ground.

3. No political track to end the war.

The cease-fire announcement on September 12 immediately hit a dead end because there was no plan to shift to broader talks on resolving the conflict. Despite months of direct U.S.-Russian talks on Syria, and continued rhetoric from both powers on the need to find a “political solution,” neither have developed a comprehensive plan or pathway to find such a resolution to the war. There have been no serious proposals put forward on a transitional government. The United States and its regional allies have maintained their line that President Bashar al-Assad will have to depart at the end of a transitional process, but have not proposed how to retain state institutions while reforming key branches and removing the Assad regime, who would serve as an alternative leader that could keep the fractured country together, or what shape this transitional government would take.

The same can be said of the Russians. Moscow claims there is no alternative to Assad, and have made it clear their key interest is ensuring the Syrian state remains intact and does not capitulate à la Iraq and Libya. However, they have not proposed how they intend to keep that state intact, or how they intend to restructure its vital institutions, such as the army, with Assad still at the helm. It is apparent to the Russians that the status quo is unsustainable, and Assad cannot regain total control of the country, despite his repeated declarations to the contrary. The Syrian war map has seen little change since Russia’s intervention rolled back rebel gains in early 2015, and is unlikely to significantly change with the Syrian army exhausted and drained of manpower, and the rebels lacking the efficient weaponry and cohesion to advance. A compromise will eventually be made at the negotiating table, thus it is baffling why no major foreign power has genuinely attempted to kick-start a peace process, let alone bring forward a plan to resolve the conflict.

The Syrian war is made even more complicated by the layers of other conflicts that have become intertwined. Russia’s intervention in Syria, in line with its foreign policy, is undoubtedly influenced by its perceived conflict with the United States, and its desire to seek recognition as an equal to America in global great-power terms. Displaying its military might, with complete indifference to international norms (the recent bombing of a UN aid convoy being the latest example) and U.S. objections, demonstrates Russia’s great-power status and the limits to U.S. power. Washington’s willingness to partner with Russia in Syria is, in Moscow’s view, recognition of such a status. Thus, the latest cease-fire deal, as well as previous attempts, is primarily viewed, at least by the Russians, within the paradigm of U.S.-Russian bilateral relations. The drivers are determined by this relationship, and not necessarily by the key factors required, as mentioned above, to ensure successful implementation of the deal, or launch a serious political process to resolve the war.

It is clear that the will to return Syria to peace and stability is absent. The cease-fire deals are crafted in such a manner that failure is the only possible outcome. After six years of unspeakable human suffering, no foreign power engaged in the Syrian war has demonstrated the slightest interest in compromising, or using their influence on local actors to steer the conflict toward a peaceful resolution. Despite repeated talk of a “political solution,” foreign powers are only pursuing a military option. Foreign powers and their local allies appear determined to achieve “facts on the ground” prior to February, in anticipation that the next U.S. administration might change course on the war.

The clear fact that seems to elude those involved is that the Syrian factions in the war—government and rebel—are exhausted. The only significant developments on the battleground in the past twelve months have been as a result of direct foreign intervention from Russia, Iran and, most recently, Turkey. This leaves foreign powers involved in the Syrian war with two stark choices: invest more militarily to achieve objectives directly, adding greater risk to personnel and potentially being stuck in a quagmire, or compromise at the negotiating table. Once the latter is truly embraced as the preferred option in Moscow, Washington, Ankara and Tehran, we may perhaps see a cease-fire deal that will stick.