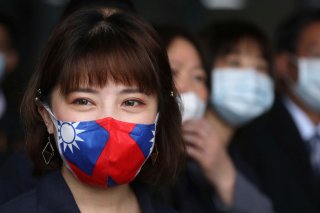 Among the 177 countries and regions around the world where the number of Wuhan coronavirus cases—medically designated as COVID-19—are disturbingly skyrocketing, Taiwan is a notable exception. Outside of Asia, Europe was the first region seriously hit by a coronavirus outbreak—France reported the first case in Europe on January 24, followed by Germany three days later. As of March 29, Italy—the epicenter of the European outbreak—has seen 97,689 cases and 10,779 deaths since its first case was reported on January 31. International media in Europe and the United States have rightfully hailed Taiwan as a role model for its containment of the global pandemic, especially considering Taiwan’s close proximity to China—where reporting of the virus first began—and the millions of visitors who cross the Taiwan Strait each year. Perhaps Taiwan’s success is even more telling because of Taipei’s exclusion from the World Health Organization (WHO).

Between the island’s first known case on January 21, Taiwan is now experiencing its second wave of cases imported from Europe and the United States, bringing the total to 298 as of March 29. For a worldwide pandemic that does not discriminate between borders and nationalities, the slow, poorly-coordinated, and arguably weak global response to the COVID-19 crisis have exposed gross deficiencies in the global governance system. Moreover, this is especially true in terms of the negative influence that certain countries have on the inability of others to respond more effectively to the global crisis. How has the international community, and European countries in particular, reacted to Taiwan’s response—despite being outside of the WHO? Furthermore, what effects could this have for European countries’ support for Taiwan’s future international participation in the WHO?

A preliminary survey of European media coverage of Taiwan’s response to the pandemic shows that as the coronavirus began to spread into Europe, European media outlets have clearly taken note of Taiwan’s success in combatting the pandemic. In the United Kingdom, stories highlighted Taiwan’s preparedness thanks to its previous experience with SARS, and the early launch of preventive measures that limited the number of cases on the island. In Germany, Süddeutsche Zeitung noted that thanks to Taiwan’s effective control at the beginning, the crisis has been managed without completely freezing social life, in contrast with the complete isolation imposed in China. German news portal RND highlighted a U.S. study on Taiwan’s response to the pandemic and Der Tagesspiegel pointed out how the WHO disregards Taiwan.

Czech media—as well as expats residing in Taiwan—explained how effective communication with the public, the leading role of the National Health Command Center, high-quality healthcare, ongoing monitoring and temperature checks, mask rationing, clear instructions for public prevention, and other measures contributed to the extremely low number of cases in Taiwan. News outlets in France, Belgium, Slovakia, Netherlands, and Poland also provided coverage of the lessons of Taiwan’s approach for Europe. French Le Monde highlighted its detection and traceability measures, while a French business magazine showed how Taiwan utilizes technology and big data to contain the epidemic.

One Slovakian newspaper lamented that so far, there has been little interest among European leaders in these valuable lessons. One notable exception is the Czech Republic; in a Twitter post, Prague Mayor Zdeněk Hřib expressed appreciation for the pandemic response materials obtained from Taiwan and stated that he would urge the Prime Minister and the epidemic authorities to implement proven methods instead of “reinventing the wheel.” Perhaps another one is an Italian village which systematically tested all of its residents and successfully contained the outbreak, notably similar to Taiwan’s approach.

In spite of the groundswell of positive public attention towards Taiwan’s response to COVID-19, the European Union (EU) has a long—and somewhat mixed—track record of backing Taiwan’s participation in the World Health Organization (WHO). As early as 1999, the European Parliament (EP) expressed its support for Taiwan’s participation in the WHO; the EP also issued resolutions supporting Taiwan’s observer status in the World Health Assembly (WHA) in 2002, 2003, and 2006. Yet, in a move to not upset EU-China relations, the European Council—comprising the heads of EU member states and acting as an policy agenda-setting body—voted against Taiwan’s observer status in the WHO in 2004. Following the political thaw in relations between Taipei and Beijing under KMT president Ma Ying-jeou, Taiwan was permitted to take part in the WHO as an observer in 2009-2016 under the name “Chinese Taipei.” After Beijing unilaterally prevented Taiwan from participating in the 2017 WHA—after Tsai Ing-wen was elected president—European countries and many others gradually resumed their support for Taiwan. Yet, it wasn’t until 2019 that Taiwan experienced an unprecedented wave of support by like-minded countries.

This growing support is likely the result of an overall-strengthening of cooperation and ties between Taiwan and both Europe and the United States. It may be also due to the increasing discontent in Europe with China’s authoritative regime and a comparatively attractive and liberal Taiwan. A recent Dutch report cites Taiwan’s liberal democracy and limited reciprocity in terms of trade with China as factors that contribute to the growing EU-Taiwan economic ties. EU’s growing awareness of Taiwan, as well as growing trade ties, may well be contributing to European support in other areas, including participation in international institutions. Another reason for this increasing support could be that Europe is becoming aware of the side effects that any form of cooperation with China often entails, such as political pressure and unexpected caveats linked to business deals. Additionally, this has become further evident as many European countries seek medical supplies during the pandemic.

Observers have also pointed out that China may be attempting to drive wedges between EU members and that Beijing is now aiming to reinvent itself and repair its reputation from being the originator of the coronavirus pandemic to becoming the world’s savior through widespread publicization of providing medical supplies to Europe. China has been portrayed this way in Italy, after a delivery of medical supplies was promoted by Italy’s Foreign Minister Luigi Di Maio on Facebook. A similar scenario played out in the Czech Republic, where politicians misrepresented a delivery of face masks of China as Chinese aid. This was later corrected by sinologists as well as other politicians who clarified that the Czech Republic purchased the face masks, making it a standard business deal, not aid. Furthermore, the delivery did not even include the type of respirators necessary for medical professionals. Others have pointed out that in mid-February, the Czech Republic provided cost-free humanitarian aid to China—all while Chinese diaspora was reportedly instructed to buy up Czech medical supplies and send them to China—and yet the PRC is now hailed as a Samaritan for selling those same masks back. Finally, one article reported that highly-effective respirators made by a Czech company in China are nowhere to be found; it is likely that they have been confiscated by the Chinese government.

European countries are now discovering that a concerningly large portion of the medical supplies from China are virtually worthless: the Netherlands is recalling 600,000 FFP2-class defective surgical masks, while the Czech Republic received coronavirus test kits with an 80 percent error rate and Spain obtained tests with only a 30 percent detection rate. This is a tragic misstep which will cost lives, as these tests were meant to speed up the detection of coronavirus cases in hardest-hit European countries.

At no point in history has European support for Taiwan’s participation in the WHO been as robust as it is now. European politicians have been gradually calling on the director of WHO to admit Taiwan with a stronger voice and in bigger numbers each year.

Taiwan’s Ministry of Foreign Affairs issued a press release in May 2019 expressing gratitude for the unprecedented international support for Taiwan’s participation in the WHA that year, highlighting that a total of thirty-four countries, regions, and international organizations supported Taiwan’s bid. On a national level, government officials of Britain, France, Germany, and EU backed Taiwan on social media, in media, and at the WHA plenary meeting. Moreover, for the first time, the pro-Taiwan factions in the European, French, German, and British parliaments sent a joint letter to the director of WHO and nearly 90 members of Baltic parliaments in Lithuania, Latvia, and Estonia also sent a joint letter. Also, in the Czech Republic and Slovakia, over one-hundred members of the two national parliaments sent a similar letter. This was a significant jump from the previous year, during which Taiwan thanked the EU for a single instance of support in a similar statement. Yet another sign of growing European recognition of Taiwan’s importance is the creation of the Formosa Club in October 2019, uniting Taiwan Friendship Groups from European Parliament, France, Germany, and the UK.

In the first months of 2020 alone, Taiwan’s Foreign Ministry issued multiple statements thanking governments and international bodies for their support. In one such statement, Taiwan highlighted the EU's call for Taiwan’s inclusion in the WHO. In another one, MOFA thanked European countries in a Facebook post and an official statement for their broad public support. The releases highlighted a joint letter to the WHO by 127 parliamentarians from fourteen European countries (namely the Czech Republic, Lithuania, Estonia, Germany, Netherlands, Ireland, Austria, Slovakia, Hungary, Spain, Italy, the United Kingdom, Latvia, and Portugal). It also thanked the newly established Formosa Club as well as the Scottish and Taiwan-Sweden Parliamentary Friendship Groups for their continued support for Taiwan’s participation in the WHO in the wake of the coronavirus outbreak.