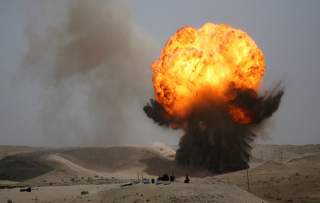 September 17–19: Pipe bombs and pressure bombs detonate or are discovered in New York and New Jersey, injuring at least twenty-nine. The perpetrator’s motivations remain unclear, and no terrorist group has stepped forward to claim responsibility.

September 17: a man goes on a stabbing spree in a Minnesota mall, injuring at least ten. He makes alleged references to Allah, and ISIS claims responsibility.

I list these events not to terrify readers with a staggering death toll or to insinuate an increasing reach or appeal of ISIS, but to point out an interesting angle that isn’t receiving enough attention. How often is ISIS (also known as Islamic State or ISIL) claiming credit for terrorist attacks around the world? This question begs others: how many claimed attacks genuinely come from ISIS? When might a terrorist group wish to claim responsibility for some cases, but not others? Why does any of this matter for policymakers?

Understanding claims of responsibility is important for two reasons. First, it is a tool of asymmetric warfare. Groups that do not have traditional or complete militaries or weapons must resort to other means in order to ensure an impact against a more capable adversary. Claiming—or not claiming—attacks can deliver that impact. Claimed attacks can bestow a disproportionate sense of power and reach of the group itself, while anonymous attacks can sow fear and instability among the group’s target population. Any tool of warfare deserves proper consideration in order to determine how to most effectively render it useless.

Second, claims of responsibility can provide much information about a particular terrorist group. What circumstances might induce a group to speak up for one attack but remain silent about another? If we truly want to understand terrorists’ motives and rationale, then we cannot overlook this part of their decisionmaking process.

The Allure of Anonymity

As often as we see headlines connecting groups like ISIS to attacks around the world, most terrorist acts in fact go unclaimed. The University of Maryland’s Global Terrorism Database is a frequently cited source for insight into this statistic.

Stanford political scientist Eric Min used the database to show that “of 30,000 terrorist attacks with relevant information in the Global Terrorism Database, only about 4,000 incidents are openly claimed. . . . the proportion of attacks claimed never exceeds 20% in any given year.”

Journalist Brian Palmer ran his own calculation (also using the database) and found a similar result, determining that terrorist groups have claimed only about 14 percent of the more than forty-five thousand terrorist attacks that have occurred since 1998. (It should be noted that the database defines “terrorism” as “the threatened or actual use of illegal force and violence by a nonstate actor to attain a political, economic, religious, or social goal through fear, coercion, or intimidation.”)

This means that a vast majority of terrorist attacks go unclaimed. Anonymous attacks are frustrating, because they necessitate that experts and policymakers guess at the group’s motivations or larger goals. In some cases these goals are obvious: an increase in attacks during an election, for an example, can effectively deter people from voting. Eleven anonymous attacks occurred in the March 2010 elections in Iraq, and at least thirty-eight attacks have occurred on various polling stations in India since 1998 (although authorities named certain terrorist suspects in some of them). In these cases, the violence itself achieved the goal—protest of elections, at the minimum—without a group needing to assign its voice to the attack.

Avoiding responsibility could also act as a force multiplier, in a sense: terrorism is scary enough for a population, but anonymity makes it more so. The psychological effect of not knowing the “who” or “why” behind an attack can make the attack itself, and the concept of future attacks, much more devastating. In turn, an inability to identify the terrorist group makes the government look inept and impotent, which undermines the government’s legitimacy in the eyes of its citizens and only furthers terrorists’ goals. Finally, anonymity protects the terrorist group from government reprisals.

In other cases, anonymity is appealing because it offers plausible deniability; claims of responsibility could complicate a group’s relationship with a client state, potential donors or political allies. One frequent example here is Hezbollah. The group has claimed responsibility for about half of ninety-two terrorist attacks since 1998 (at least as of March 2014)—it tends to admit its attacks on the Israeli Defense Forces, which appeals to its anti-Israel base, but remains silent on attacks like the ones that occurred in Bahrain in 2012 (that are nevertheless widely attributed to it), which would have angered some of the group’s government sponsors.

Still other groups avoid claiming responsibility because they do not know how to do so safely. They may be uncertain of how much time to allow for attackers or facilitators to escape, may be uncertain of how to publish a video or document that does not give away crucial information (geographic or otherwise), or may lack sufficient contacts in news outlets who can bump a claim up the chain of command to be taken seriously.

If an attack remains anonymous, or even if the “attack” was actually an accident, other groups may claim responsibility instead. This is the false claim of responsibility. When Malaysia Airlines Flight 370 went missing in March 2014, a group called the Chinese Martyrs’ Brigade sent an email blast to a large number of reporters in order to claim responsibility, saying that the downed plane came as retaliation for the Chinese government’s response to the Kunming rail station knife attacks and was part of a larger separatist campaign in Xinjiang Province. The claim was dismissed immediately: it lacked specificity, was inconsistent with actual separatist aims and was sent to too wide an audience—as if they wanted too badly to be taken seriously—as well as to people who had never heard of the group before. The actual aim was likely to spark further ethnic tensions in China.

Overall, anonymous attacks are frustrating. There is little experts can do to anticipate or prevent them, and fewer openings to understand and solve the underlying grievance. According to terrorism expert Aaron M. Hoffman, writing in the Journal for Peace Research, anonymous attacks “are often taken to indicate that groups are disinterested in building grass-roots support for their movements and closed to efforts at political compromise.” Conversely, claims of responsibility can “provide a window into what perpetrators of terrorism want and the incentives that influence their behavior.”

Claiming responsibility for a terrorist attack is strategically attractive for a variety of reasons. For one, as mentioned above, it shows an ability to project reach and power. This directs attention to the group itself, as well as its message.

Essentially, terrorist groups use credit-taking as a form of communication. As Hoffman explains, it is a message easily understood by a target audience; it is an inexpensive identifier compared to others (like specific bomb signatures, which could rely on specialized parts or people); and it provides a “temporal proximity advantage,” or first-mover advantage. The more quickly a group claims responsibility for an attack, the more clearly it can distinguish itself from other groups who may wish to sneak in and claim some other group’s attack as their own. Credibility degrades with time.

This is because the more competitive an environment is—meaning, the more terrorist groups operating in a particular space—the more difficult it is for a group to distinguish itself among others. If a sympathizer cannot tell who organized a particular act, then that sympathizer cannot transform into an active supporter or even recruit. Credit-taking allows terrorists to “reap the organizational benefits of violence.”

In this way, a terrorist attack serves as an advertising tool: “Look what we can do, and how well we can do it. Come join us.”

In addition to the competitive context, scholars have identified several other factors that can help predict when a terrorist group might prove more likely to claim responsibility for an attack. One is ideology. Credit-taking is more likely for groups that are structured around a political ideology (like socialism or nationalism), because goals are often tangible (secession, autonomy or further representation, for example) and rely on mass support. Credit-taking can garner the attention needed to leverage concessions out of the opponent. Meanwhile, credit-taking is less likely for religious groups, because supposedly the groups emphasize service to God over political goals and attention; piety is the key, and a terrorist act can thus serve its purpose—punishing disbelievers—without the group claiming credit. Joshua Keating describes how Islamist groups are more interested in simply destroying enemies rather than winning concessions, and are thus less likely to claim credit than nationalist or extreme leftist/rightist groups.