Why the 9/11 Bill Establishes a Dangerous Precedent 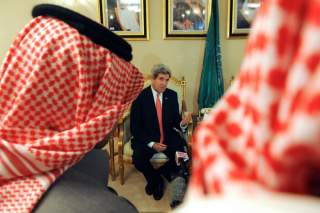 It’s difficult to argue against a bill entitled the Justice Against Sponsors of Terrorism act and apparently even harder to vote against it. The so-called “9/11 bill” jointly sponsored by a Republican Senator from Texas and a Democratic Senator from New York, was passed by Congress over Obama’s veto this week. The White House called it the “single most embarrassing thing the Senate has done” in forty years.

The bill allows victims’ families to sue Saudi Arabia for the World Trade Center attacks, primarily based on the citizenship of the attackers (fifteen of the nineteen were Saudi citizens).

Saudi Arabia is an easy target for this legislation. Though officially an ally and quite a good customer of U.S. arms and defense equipment, it has long been viewed with suspicion by the American public. In Foreign Policy, Saudi Prince Turki al-Faisal noted that Saudi Arabia gets “blamed for everything from global terrorism to high gasoline prices.” The country has been implicated by both sides of the political spectrum, though Saudi Arabia strongly condemned the attacks, and mounted campaigns against Al-Qaeda in concert with the United States. In regional operations, the Pentagon has used Saudi bases, and has a long relationship advising and training the Saudi armed forces.

The presidential veto was based not on an argument to preserve a strategic alliance, but to prevent blowback. The bill establishes a dangerous precedent of allowing victims to hold liable a state for the actions of its citizens. If other nations pass reciprocal measures, the United States could face politically motivated legal retaliation from foreign governments. In separate letters, the Pentagon, White House and intelligence agencies’ argued to uphold the long-standing principle of sovereign immunity as embodied in the Foreign Sovereign Immunities Act of 1976. CIA Chief Brennan noted the consequences: “If we fail to uphold this standard for other countries, we place our own nation’s officials in danger. No country has more to lose from undermining that principle than the United States.”

Currently the United States operates more than 800 bases in more 70 countries and employs hundreds of thousands of defense, intelligence and diplomatic personnel to work abroad. The risk of politically motivated lawsuits is precisely the rationale behind Congress’ refusal to ratify the Rome Treaty, which established the International Criminal Court (the United States is the only OECD country that is not a member). As noted by House Armed Services Committee Chairman Mac Thornberry (R-TX), “Many of us have long resisted any attempt to subject US personnel to criminal or civil courts around the world….Differences should be resolved between governments based on policies, not by individual litigants in the courts.”

The bill offers few benefits and significant risks, as it would likely neither protect Americans from terrorist attacks nor deter others from mounting them. Even if only used domestically, courts are a problematic venue to conduct terrorism policy. The President argued that “this would invite consequential decisions to be made based upon incomplete information and risk having different courts reaching different conclusions about the culpability of individual foreign governments and their role in terrorist activities directed against the United States”.

Some of these concerns were noted by the legislators themselves but efforts to revise the bill ultimately failed, with lawmakers contending instead that they would clean up loose ends later. The bill passed the Senate with a vote of 97-1 (with only Harry Reid opposing), and in the House 348-77.

The sponsors of the legislation also displayed some moral gymnastics. John Cornyn (R-TX), the co-sponsor the bill, asserted that, “This legislation is really about pursuing justice…The 9/11 families have already suffered untold tragedy, and they deserve to find a path to closure that only justice can provide.” His support for liability lawsuits against third parties to remedy violence is at odds with his voting record to prohibit liability lawsuits against gun manufacturers, distributors and dealers. Co-sponsor Chuck Schumer (D-NY), held that, “If the Saudis did nothing wrong, they should not fear this legislation.” This mirrors the rationale offered by proponents of mass surveillance, which Schumer has opposed.

Overall, the vote, which included impassioned pleas for victims’ families to “have their day in court,” represents more than just the long shadow of 9/11.

Overriding the Presidential veto is a symbolic victory in reasserting Congressional control. Over the last few years, the elected body has played second fiddle in important economic and foreign policy decision-making, with President Obama using executive orders to circumvent Congressional deadlocks and budget brinkmanship. Even in the traditional “lame duck” period, Obama has managed significant achievements around the Iran Deal, trade negotiations, and re-establishing ties with Cuba. Meanwhile, landmark issues around marriage equality and healthcare have also been settled outside of Congress, through the Supreme Court.

Perhaps more importantly, this is an election year. A vote that is perceived as soft on terrorism or unsympathetic to 9/11 families, just thirty nine days before the election would likely be met with its own blowback. (The only Senator to vote against the measure is set to retire this year). Looking back, then, this bill may be judged as symbolic — another example of an election year issue dominated by appeals to emotion rather than long-term vision.

Dr. Jennifer S. Hunt is a lecturer in the National Security College, ANU where she specialises in the intersection of defense, energy and economic security policy. She has published on US national security, as well as political and economic transitions in the Arab Gulf. In 2011, she was a visiting scholar at Sultan Qaboos University in Muscat, Oman.