Why the Brussels Donor Conference Should Recommit to Afghanistan 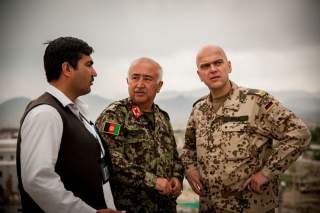 Afghanistan’s government and its partners should also continue developing regional trade and economic ties. Afghanistan became the 164th member to join the World Trade Organization (WTO) in July 2016 — a major accomplishment. Now the task is to implement the commitments made and to take advantage of the new trade opportunities. Afghanistan’s growth depends on its ties to the region. We should ensure its further involvement in projects encouraging regional economic cooperation. Afghanistan’s neighbors will all play important roles. The role of Pakistan will remain critical in advancing the security and economic agenda. India will play an important role in developing Afghanistan, often through the private sector.

The United States, the international community and the region could pay very high costs for prematurely withdrawing support from Afghanistan. They would risk squandering the human and financial sacrifices Americans and many others have made to help Afghanistan since 2002. Millions of women, children and men would be left at the mercy of the Taliban. Allowing a state to fail in such a rough neighborhood could have enormous costs when the struggle against violent extremism is threatening so many countries.

Afghanistan’s international partners should be guarded but committed, as long as we have credible Afghan partners willing and able to strengthen their capacities and to produce solid results across the security, development and governance agendas. In this connection, it is essential that the Afghan domestic political process also continues to produce credible outcomes, despite the divisions among the country’s elites and ethnic communities.

This will be a long term slog, with setbacks and successes along the way. With sustained and relatively modest international donor support of $3-4 billion a year in development aid, we can expect Afghanistan to make progress on an upward trajectory during the coming decade. Progress will also require a residual U.S. and allied security presence committed in support of hopefully increasingly effective Afghan forces. The country is not ready to be cut off from U.S. and international support, but with a healthy partnership and determination by Afghan authorities, the balance of the burden for security and development can increasingly tip toward the Afghans.

The Brussels conference offers the Afghan government and its partners a chance to recommit to progress, to a path of clear benchmarks, and to the country’s potential.  This effort will demand at least another decade.