Why the Doug Jones Victory Is Overblown 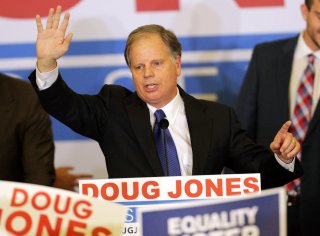 Nothing less than accusations of fondling a fourteen-year-old, along with copious proof of dating sixteen- and seventeen-year-olds, was needed to stop Roy Moore from becoming the next U.S. Senator of Alabama. The scandals suppressed Republican turnout, while the fundraising boom Democrat Doug Jones enjoyed helped him mobilize black voters—who, to be sure, may not have needed much extra incentive to mobilize. NeverTrump Republicans are as pleased as Democrats by the outcome, and even Sen. Mitch McConnell might be breathing a sigh of relief. His majority has lost a seat. But it has also dodged a bullet. McConnell had few practical options for ostracizing Moore in the Senate, and even before Lolitagate, Moore was poised to be a nuisance to the majority leader.

President Donald Trump and Steve Bannon are the losers here, according to conventional wisdom. Bannon tried to turn Moore into a showpiece for populist insurgency in next year’s Senate races. And Trump has now backed two failed candidates in a row in Alabama, first endorsing GOP incumbent Sen. Luther Strange, only for Strange to lose to Moore, and then exerting himself for Moore, when the safe course would have been to abandon the ex-judge to his fate.

The conventional wisdom is wrong. Mostly, that is: pundits who see in Moore’s fall a premonition of things to come from the Republican Congress in 2018 are almost certainly correct. But they’re right for the wrong reasons: Moore would have won if ordinary Republicans—including Alabama’s other senator, Richard Shelby—had not been disgusted into staying home or voting against him thanks to the allegations of preying on teens. Whether Moore won or lost, however, the Democrats would certainly have had the wind at their backs, performing better than usual in Alabama. And even if Moore had won, the pendulum of American politics would have been swinging towards the Democrats going into next year’s midterms. Republicans will very likely lose the House, and it’s not out of the question that they’ll lose the Senate, too. Jones’s victory brings the Democrats one step closer already.

But this is not Trump’s loss, and it’s not Bannon’s loss either. Trump played nice with McConnell and the Republican establishment by backing Strange, but populist Republicans in Alabama voted for Moore anyway. That shows the strength, not the weakness, of Trumpism, just as surely as Goldwater voters’ supported Ronald Reagan in 1976. This was in spite of Goldwater’s own loyal Republican support for President Gerald Ford and highlighted the growing strength—not the weakness—of the conservative faction of the GOP. And Moore had a shot at winning the general election, even in the face of accusations that would have annihilated any ordinary Republican or Democrat. Consider how allegations of groping grown women were more than enough to take down Al Franken, and Franken wasn’t even up for election. Put bluntly: hard-right candidates like Moore are increasingly successful in GOP primaries, and they weather nuclear fallout in a general election better than ordinary Republicans or Democrats conceivably could. That’s the lesson to be learned here.

Twenty or thirty years ago the GOP electorate was still timid enough to react to a hardline conservative’s ballot-box failure by embracing a moderate or a “kinder, gentler” conservative the next time around. Pundits are prating as if the GOP electorate today thinks the same way. It does not. Party elites, who have always preferred safe-bet candidates (often even safe-bet losers) to hardline conservatives, no longer command the loyalty of the rank and file. Forces like talk radio and Breitbart now possess more authority with the base. The “conservatives” of yesteryear are as much out of step with the party today as the Rockefeller Republicans were when the Goldwater-Reagan conservatives first took over. But don’t think of this in terms of a linear “conservatism.” The labels are less important than the pattern, which is a familiar pattern of Republican insurgency against a stale leadership class.

This time is different, however: history rhymes, it doesn’t repeat. The GOP is like a dying star that begins by growing hotter, not colder, as it shrinks. In this case what’s happening is that the white-hot core of the GOP is becoming more and more self-consciously antiestablishment and nationalistic. This new configuration of the GOP is able, for a time at least, to attract voters in Rust Belt America who never felt the urge to cast a vote for the likes of Mitt Romney, or even George W. Bush. But even as it pulls in some new voters, the GOP is boiling within, and college-educated Bush-Romney voters are set to blast out of the party. The Bannonites will be glad to see them go, up to a point. But a hard-right nationalist party, even one that claims a larger share of the old twentieth-century industrial America’s loyalty, won’t win elections if it doesn’t hold onto a critical mass of the upwardly mobile. The trouble for the Republicans is that the nationalists, who own the party now, seem little inclined to find a formula for keeping enough of the old non-nationalists, while the non-nationalists themselves indulge in nostalgic fantasies of a GOP whose clock can be turned back to the year 2000.

And that’s not all: the GOP’s awkward alliance between populists and plutocrats, the former supplying the votes, the latter getting the legislation, can’t long endure in its present form. At some point—not only in 2018, when a swing toward the Democrats is inevitable, but also in 2020—those Michigan and Pennsylvania and Wisconsin voters who made Trump president will ask what Main Street has to show for it. If a Trump or Bannon doesn’t have a convincing answer, those votes will defect to someone else: a Perot or a Sanders, or God knows what. The GOP does indeed need its financial backers as well as populist voters, but its survival depends on delivering results for more than just Wall Street.

The Democrats, meanwhile, are spoiled by success. They don’t have to answer the question of whether they’re the party of Bernie Sanders or the party of Chuck Schumer so long as they can count on electoral recoil to give them back a legislative majority. The Democrats are counting on identity politics to save them in the long run: as America becomes less white and less Christian, it has to become more Democratic, doesn’t it? But the conceit that race and “culture” are primary to politics while class is at best a secondary concern is not a safe assumption in the long run. The younger, multicultural America on which the Democrats rest their hopes is also deeply in debt and increasingly skeptical of democracy itself. It’s an America ripe for a Gracchus, and in time a Caesar. It’s certainly not an America that looks to the likes of a Hillary Clinton or Chuck Schumer for its salvation, no more than Bannon’s America does.

Doug Jones is a lucky man, and the Democratic Party is in for a very good year. The anti-Trump Republicans can bask in self-satisfaction a little longer, imagining that their day is coming back, even as the new right-wing media shovels dirt onto the coffin of the old Bush-era conservatism. But don’t be fooled. The future is still heading toward new and harder forms of left and right.