Why the Elite Wanted Trump To Lose 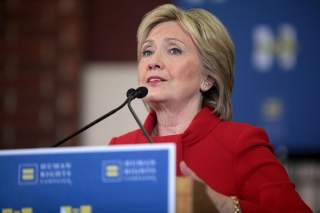 Elections pose a basic problem. Should the direction of a government be set by amateurs, by a majority or plurality mass of people who know nothing about policy detail, or should the best and brightest, the educated elite, make informed decisions for the good of everyone? Last night, the amateurs chose a new leader and a new direction for the country. Donald Trump is now president-elect. The elite thinkers of the media and policy realms are appalled. They spent months insisting that Trump was an ignorant bigot, a dangerously unstable fellow who could not be trusted with the kind of power that only they were fit to wield. The elite in both parties, among “conservative” journalists as well as “mainstream” ones, wanted Donald Trump to lose, and they confidently predicted he would. They were wrong.

Trump does not have the conventional resume of a presidential aspirant. He has never held elected office. He has never served in the armed forces, either. Instead, he has been a high-profile businessman and television celebrity. His name is a brand. How does that prepare anyone to occupy the Oval Office?

Trump is prone to making off-the-cuff remarks and articulating his policy themes in sometimes shockingly blunt language. This plain-spokenness and tendency toward hyperbole is perhaps as objectionable to educated elites as his policies: a good, well-educated technocrat, a polished politician, simply doesn’t use that kind of rhetoric. He has violated “norms,” and those norms—the etiquette of the elite—are sacrosanct.

If this is as far as one’s analysis goes, it seems obvious that the voters are wrong to make Donald Trump president. But maybe some things are more important than credentials or elite norms: perhaps, it’s worth considering, policy results also matter—and matter rather more.

Judged by the standard of her policies and their results, Hillary Clinton was evidently unfit to to be president. She voted for a Republican president’s unnecessary and wholly catastrophic war in Iraq. She urged a Democratic president to effect regime change in Libya. She has been a staunch friend to institutions of high finance that bear a large degree of responsibility for the financial crisis of 2007/8 and Great Recession. And she subscribes straight down the line to a progressive social agenda that Americans have never been willing to support when given a direct say in the matter. Gun control? Abortion? Clinton was considerably to the left on such questions. She has long been a peculiar mixture of centrist and leftist, combining many of the worst elements of each.

Yet she had credentials. She followed the prescribed etiquette. And many of her screw-ups, however lethal they proved to be, were screw-ups in which other leaders in both parties shared responsibility. What Republican could criticize Clinton for her Iraq vote? How different was Clinton’s involvement with, say, Goldman Sachs from that of other politicians? Clinton’s policy faults were not faults at all in the eyes of her fellow educated elites.

Indeed, as anyone who’s spent a bit of time in Washington, DC discovers, it’s professionally better to be wrong in a crowd than to be right by yourself. Clinton did not stick out. She did not make others of her class uncomfortable. George Will could have tea with her.

America’s educated elite—in the academy, the media, government, and the para-governmental world of think tanks and pressure groups—has been systematically and collectively wrong about some of the biggest questions in foreign policy, economics, psychology, sociology, and culture. The best and brightest have assumed for twenty years that what every man and woman on earth most deeply desires is to become a liberal democrat. Steel workers in Pittsburgh and goat-herders in Afghanistan really in their heart of hearts yearn to be more like Washington Post op-ed columnists. What could be a higher human aspiration?

The belief that comfortable, sexually satisfied consumerism, wedded to gauzy notions universal brotherhood (or sisterhood, or gender-nonspecific siblinghood), is all people want out of life has fueled the drive to integrate world markets, merge populations across borders, and dissolve the sovereignty of any state that falls short of the liberal-democratic ideal. Anyone who rejects this anthropology is irrational—much as Donald Trump is irrational—and requires education, if not medication. So bizarre and incompatible with historical humanity is this vision that all the wealth and prestige at liberalism’s disposal have not been enough to keep even Americans from demanding something else. The alternatives Trump offers are the nation-state and a vague idea of greatness—which, vague though it might be, is still rather more than what liberalism is selling.

The voters who elected Trump don’t subscribe to the complex ideological formulae of Beltway apparatchiks. But they know how they feel, and they know what’s happening in their own lives. They know that being an American doesn’t seem to mean as much or promise as much as it once did. And so they want to make America great again, and Trump is the instrument at hand. They know from experience things that a Brookings scholar’s flowcharts can never reveal.

A false anthropology undergirds the terrible errors that our educated leaders have made in foreign policy, economics, and governing in general. A different anthropology—hardly a completely correct one, but a more realistic one—is what informs the Trump vote, however inchoately. The amateurs know more than the experts. Donald Trump figured that out, and it’s won him the White House.