Why the Federal Reserve Is All Talk 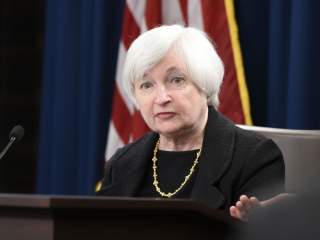 The U.S. Federal Reserve is rediscovering that talking—sometimes about doing nothing at all—can be a useful and powerful tool to transmit policy.

With a strong dollar and a slow global growth environment, the Fed was placed in a difficult spot at its March meeting. Its policymaking committee, the Federal Open Market Committee (FOMC), foresaw tighter policy, and projected it continuing in the future. But conditions had become too tight too quickly, and the Fed needed to loosen policy without losing credibility. Enter the mechanism of forward guidance: guiding future policy without the necessity to make an explicit decision on rates.

First, the statement released after the Fed’s March meeting indicated that members were increasingly focused on global risks. Certainly, this is not the first instance of the Fed citing the global economy, but it reiterated a component of the Fed’s decisionmaking mechanism that is difficult to monitor and only vaguely defined. Global risks are a permanent fixture of the economic landscape, rendering the ability to escape toward a global mandate an open-ended and powerful tool.

The statement was followed by a slew of Federal Reserve members giving speeches and interviews to clarify the message from the FOMC. A couple were hawkish, but Fed Chair Janet Yellen quelled those voices. But neither clarified the weight the committee places on global uncertainty. While observers are aware of China’s risk to the global economy with the potential to devalue its currency, few, if any, have clarity on how much it matters to the Fed.

Speaking to the reasoning underpinning the policy decision, Chicago Fed President Charles Evans emphasized the Fed’s dual mandate as well as the global factor. Critically, “talk” did not stop with global uncertainty. Evans provided ample reason to be cautious on domestic employment and inflation. There are certainly reasons to be skeptical that the labor market mandate has been achieved, and his concerns mirror what his colleagues at the Fed, with a few exceptions, have stated.

On the employment side of the mandate, despite a U.S. unemployment rate of 5 percent, there are reasons to be skeptical the United States is encroaching on full employment. Since the beginning of 2009, the labor force participation rate in the United States has declined from 65.7 percent to 63 percent. Alone, this is representative of 6.8 million people no longer in the labor force. Adding these workers back into the labor force would increase the unemployment rate to 9.1 percent, providing plenty of room for accommodation.

Narrowing the view, even the so-called “prime-age” workers have been under pressure and not fully recovered, with more than 1.6 million fewer in the labor force. The prime-age worker data is used to strip out the effects of retirement, and there is room for improvement. But a longer-term view shows this decline is likely structural, not cyclical; therefore, monetary policy may not be as effective.

Certainly, this is not a comprehensive review of the state of the current labor market, but it is indicative of the questions the Fed is struggling with concerning labor.

Wages are often cited as a reason for Fed to remain on hold. The Atlanta Fed’s hourly wage tracker, by requiring earnings to be present in the current year and last, increases the likelihood of measuring the wage change for individuals constantly employed. Currently, it shows wages growing at a 3.2 percent pace.

This provides a better picture of wage growth in the United States than traditional indicators, given its measurement of constantly employed workers. But this too has not recovered to prior levels following the most recent two recessions—portending little inflationary pressure as wages are a link between the employment and inflation mandates. Again, this appears to be a reason for the Fed to stand down on rate hikes.

While the Fed stands down, the Bank of Japan and European Central Bank are likely to increase their accommodation. Given that the Fed has talked down the value of the dollar and expectations for future rate hikes, it has provided some cushion to foreign exchange rates versus the dollar—regardless of the increasing divergence in policy.

Also, this should mitigate some of the pressure on the yuan to appreciate. But if both Japan and Europe choose to ease policy, yuan volatility would increase dramatically. This, and the global asset market’s reaction to it, is one of the “global headwinds” the Fed is considering when taking a cautious approach to policy.

In talking about why it chose to do nothing, the Fed gently eased its policy stance while avoiding a loss of credibility. But it remains to be seen if the Fed can successfully reverse the talk and begin to tighten policy without losing the very credibility it retained.