Why the GOP Should Fear Hillary Clinton 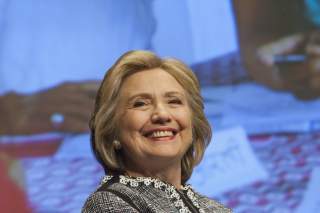 Despite the efforts of the media to inject some sizzle into the Democratic race, the blunt fact is that Hillary Clinton is and always has been a lock to win her party’s presidential nomination. Having lost the 2008 primary battle to Barack Obama, she is not about to suffer from overconfidence. Having been relentlessly assaulted by the GOP for several decades, the latest round of Benghazi/email hearings will do little damage to her electoral prospects. Instead, the tohubohu about her record at the State Department will allow Clinton to continue to curry favor with the left-wing of the party by presenting herself as the prime target of the right. And having served as a Senator and Secretary of State, not to mention eight years in the Bill Clinton White House, she is the most seasoned of the candidates, Democratic or Republican.

Her performance last night in the so-called debate in Las Vegas was a case in point. With doubts mounting about her candidacy, Clinton rolled the dice and came up big. For there really was no debate. Instead, Clinton dominated the session as the other candidates sought to make a few cameos. Her steely and poised performance offered Democrats a reminder why it’s time to stop flirting with the next cool thing and return to the hearth. As conservative pundit Erick Erickson put it, “I’m still amazed the other four candidates made Hillary Clinton come off as the likable, reasonable, responsible Democrat.”

Again and again, she came out ahead against her opponents. Bernie Sanders championed democratic socialism. Clinton championed America and the middle-class. Sanders sounded like an isolationist. Clinton talked about enforcing a no-fly zone in Syria. When Lincoln Chafee had the temerity to voice some reservations about her somewhat iffy “ethical standards,” Clinton, as Washington Post columnist Dana Milbank put it, dispatched him “as if brushing lint from her sleeve.” Given that Clinton smoothly polished off her opponents, the notion that vice-president Joe Biden will now enter the field appears more far-fetched than ever.

Indeed, Clinton has gone to some lengths to insulate herself on almost every front. When it comes to foreign policy, she is to the right of Obama. When it comes to domestic policy she is to the left of him—without making any real concessions to the party base. If, for example, by some miracle the Trans-Pacific Trade Agreement makes it through Congress in the next year, a president Hillary Clinton would swiftly (re)embrace the very pact she helped negotiate before she attacked it. On foreign policy she has her eye on the GOP. She’s already referred to Russia’s annexation of Crimea as a Sudetenland-type maneuver. Under no circumstances will she allow a Republican candidate successfully to portray her as Obama 2.0—an appeasement-minded, lily-livered, umbrella-toting wussbag who is about to sell out America to Putin’s Kremlin.

The real target of Clinton’s campaign isn’t her would-be challengers for the nomination. It’s the Republican party. She’s already in full campaign mode. She said, for instance, “if you look at the Republicans versus the Democrats when it comes to economic policy, there is no comparison. The economy does better when you have a Democrat in the White House and that's why we need to have a Democrat in the White House in January 2017.” During the general campaign she won’t even have to mention Obama. She can just talk about a return to the 1990s, when the economy boomed under her husband’s watch. Judging from her appearance last night, it seems clear that Clinton will not announce some grand ideological program for a new America. There was no program for massive new tax hikes. No call for a foreign policy crusade. Instead, she will likely sell herself as a cautious and sober pragmatist on a variety of issues: “I’m a progressive,” she said. “But I’m a progressive who likes to get things done.” She will work overtime to depict herself as a competent wonk and Repubicans as enmeshed in obscure factional struggles that bear no relation to political realities.

Which is why the political party that should blanch at last night’s debate is the GOP. It’s entertaining and fun and fascinating to watch Donald Trump, Ben Carson and Carly Fiorina joust for the nomination. But the fact remains that in general elections, a candidate that can blur the differences is most likely to win the presidency. The historian Garry Wills once referred to this phenomenon, which usually manifests itself most acutely in the closing weeks of an election, as “compensatory counterstress.”

The Vegas debate should be sounding alarms in the GOP. One thing seems clear: the new Clinton that emerged last night is unlikely to be taken down by House Republicans poring over her emails. Meanwhile, as the primaries approach, it will be interesting to see if Republicans vying for the nomination continue to devote more time to denouncing each other than Clinton.