Why the House Hearings Revealed More About America Than Russia 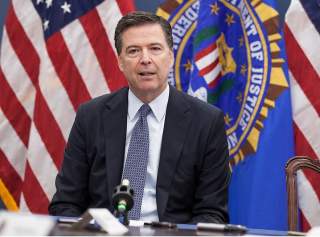 Hours into his testimony before the House Intelligence Committee, FBI director James Comey got to the heart of the matter. Russians and others had interfered in U.S. elections before. What was unusual about the meddling in last year’s election was not just the role that hacking played or the public dissemination of stolen information, it was how “noisy” the intrusions were, as if the Russians “didn’t care that we knew.” Comey elaborated in response to a question from Rep. Ileana Ros-Lehtinen. “I think in part their number one mission is to undermine the credibility of our entire democracy enterprise of this nation,” he said. He added that they might have hoped that the U.S. would “amplify…what we saw” and that they were intent on “freaking people out about how the Russians might be undermining our elections successfully.”

Mission accomplished. These hearings, which began Monday with over five hours of testimony from Comey and NSA director Michael S. Rogers, have only served so far as a showcase of democratic dysfunction and partisan paranoia. Comey and Rogers had no new information to impart; Comey repeatedly had to remind committee members that he could not confirm or deny anything about any individual who may or may not be the subject of investigation. There is an investigation underway, and it began last summer. But who is being investigated and why is not something that the FBI is going to reveal until has reached its own conclusions. “That’s one of the reasons we don’t talk about investigations,” Comey reminded the committee. “So we don’t smear people” who wind up being cleared.

Committee chairman Devin Nunes (R-Calif) concluded the hearing with an accurate summary of just what had been achieved: “I can tell you that we don’t have any evidence,” he told Comey. “There is a big gray cloud that you have now put over people who have very important work to do to lead this country”—that is, by acknowledging the existence of an investigation without providing an iota of detail. Minutes earlier, Rep. Trey Gowdy (R-SC) had noted that all the “evidence” that had so far appeared in the media to link President Trump and his associates to improper relationships with Russia amounted to so much hearsay from anonymous sources. “How do you cross-examine an anonymous source? How do you cross-examine hearsay?”

Republican members of the committee had attempted to do just that. They prodded Comey, and occasionally Rogers, to comment on how reports of classified intelligence intercepts had come to appear in the Washington Post and elsewhere in the media. The thrust of the questioning was that persons who had leaked such information had broken the law, and press outlets that had reported this news might have done so as well. (Former director of national intelligence James Clapper and former CIA director John Brennan were both mentioned by name as possibly connected to the leaks.) Comey would not confirm or deny who might--or might not--have been involved in leaks that may or may not have happened—though he stated that not everything that appeared in the press was necessarily accurate. He did, however, note that there were often more people in a position to talk to the press than there might appear to be at first glance.

To say that there could only be four suspects if information leaked out about a meeting that only four people attended was incorrect, Comey insisted. Anonymous sources could be officials who are “one or two hops out” or “people who act like they know, when they really don’t know.” Rep. Michael Turner (R-Ohio) raised the notion that anonymous sources would well be outright lying to reporters, and if they were lying about classified matters, they might not, in fact, be committing a crime and putting themselves at risk of prosecution. “I’ve read a whole lot of stuff in the last two months that’s just wrong,” Comey acknowledged. But he could not comment on particular stories or reports concerning classified matters “because we’d give information to our adversaries that way.” Refuting false stories would make stories that are not refuted appear to be true.

One point on which Comey and Rogers could be clear was that they have no evidence to support President Trump’s claims that he was wiretapped by then-President Obama or by British intelligence. Comey and Rogers would not otherwise comment on the president’s farrago of tweets. Rep. Nunes said, “Let me be clear: we know there was not a wiretap on Trump Tower.”

Rep. K. Michael Conaway of Texas went down the road of sports analogies in asking whether the Kremlin was seeking to help one side in the election. Comey stated, “Putin hated Secretary Clinton so much, that the flip side of that coin was he had a clear preference for the person running against the person he hated so much.” Of course Putin wasn’t in the role of a sports fan—operating in the sphere of international politics he would likely have contemplated whether or not the risks justified the costs and whether blowback might occur. In any case, the Kremlin, like most everyone else, seems to have assumed that Clinton would win, in the end.

For Democrats, the hearing was an opportunity to show the GOP who’s really the war party now. San Francisco Rep. Jackie Speier asked Comey if Russia had engaged in “hybrid warfare” against the United States. He and Rogers said that was the term they would use. Speier insisted otherwise: “I actually think their engagement was an act of war... hybrid war.” Her fellow California Democrat Eric Swalwell concurred: “We were attacked by Russia. It was electronic, it was nearly invisible. … It was ordered by Vladimir Putin.” In full Churchillian mode, Indiana Rep. Andre Carson warned of “A new Iron Curtain descending across Eastern Europe.”

Surpassing all the rest for hyperbole was Rep. Denny Heck, a Democrat from Washington, who called Russia “arguably our greatest adversary” and compared Moscow’s election meddling to Pearl Harbor and the 9-11 attacks. “Our battleships weren’t sunk and our towers didn’t collapse,” he admitted, but “the attack didn’t end on election day, and it will continue.” He raised his voice as he all but wrapped himself in the flag:

Perhaps it wasn’t surprising that Comey and Rogers just looked nonplussed when Heck finally got around to asking them a question: namely, why the American people should care about Russian interference in our elections. Comey pumped the requisite dosage of patriotism into his reply: “I truly believe we are a shining city on a hill, to quote a great American,” he said, emphasizing America as an example of orderly democracy. “So when there’s an effort by a foreign nation state to mess with that, to destroy that, to corrupt that … if any Americans are part of that, it’s a very serious matter.” But as Comey neared the end his testimony, the exasperation was obvious: “I’m not here voluntarily, and I would rather not be talking about this at all. And now we’re going to close our mouths and do our work.” That’s an example that most of America might Congress to follow. Don’t count on it.