Why Is the IAEA Getting Iran Wrong? 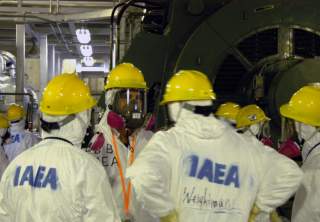 With the November 24 deadline for a nuclear deal with Iran looming, Secretary of State John Kerry and EU spokesperson Catherine Ashton met their senior Iranian counterparts in Oman earlier this week to try to hammer out a compromise. Unfortunately, the deal may still fall through, in part because of mismanagement and a lack of nuclear weapons expertise at the IAEA, which is sowing confusion and misunderstandings and coloring Iran as an untrustworthy partner. And—according to a contact who is intimately familiar with IAEA protocols—Iran itself is not helping by vetoing those few Western IAEA inspectors who are knowledgeable about nuclear weapons from working on its dossier.

Though the main points of contention in the negotiations between Iran and the P5+1—the five permanent members of the UN Security Council plus Germany—are the number of centrifuges Iran will be permitted and the timing of the sanctions relief, the atmospherics of the talks are being poisoned by the long-standing unresolved “Possible Military Dimensions” (PMD) file. Indeed, it now appears that the timing of any sanctions relief may be tied to progress in the resolving of these questions.

The PMD file is a set of allegations—provided to the IAEA years ago by intelligence agencies adversarial to Iran—about possible past activities Iran may have undertaken that may have been relevant to nuclear weaponization. Indeed, the file was originally called the “Alleged Studies” to underline the flimsiness of the evidence. Former IAEA chief ElBaradei and ex-IAEA inspectors had great doubts over the authenticity of some of the PMD concerns and the Agency chose not to press the issue very hard. This changed when Yukia Amano took the helm at the IAEA in 2009 and made the PMD file a centerpiece of his dialog with Iran.

According to Robert Kelley, a thirty-five-year veteran of the U.S. weapons complex at Los Alamos and Livermore—and twice IAEA inspections director in Iraq—at least some of the evidence purporting to show weaponization research work continuing past 2004 may be less than compelling:

“[The] evidence, according to the IAEA, tells us Iran embarked on a four-year program, starting around 2006, to validate the design of a device to produce a burst of neutrons that could initiate a fission chain reaction. Though I cannot say for sure what source the agency is relying on, I can say for certain that this project was earlier at the center of what appeared to be a misinformation campaign…. Mohamed ElBaradei, who was then the agency’s director general, rejected the information because there was no chain of custody for the paper, no clear source, document markings, date of issue or anything else that could establish its authenticity.”

Similarly, Dr. Ferenc Dalnoki-Veress, a physicist at the Monterey Institute, and I analyzed a graph (evidently part of the PMD file) that was leaked to the Associated Press by “a country critical of Iran’s atomic program,” in an effort to implicate Iran’s nuclear program. Within a few minutes of staring at the graph, we found that it contained major errors and amounted to nothing more than a “slipshod analysis or an amateurish hoax.” Mark Hibbs, writing in Foreign Policy, mentioned that "[c]onversations with enough people who might know have persuaded me that the IAEA had likely seen and evaluated the document [AP graph] before it was leaked to the press, and that there was an internal discussion at the IAEA about whether the document was genuine and what it implied."

It isn't always straightforward to obtain access to the actual evidence being used against Iran, but occasionally some is leaked to the press—such as the AP graph—or released in IAEA reports and is amenable to scientific scrutiny. My analysis of the publicly available PMD (and associated) allegations is that generally there is not great technical merit in the allegations. They are—if genuine—simply calculations (some of them openly published), which are allowed under IAEA rules, or relate to dual-use hardware, which also has commercial or conventional military applications.

For instance, the ominous-sounding Exploding Bridgewire Detonators (EBWs) issue is among other pieces of circumstantial evidence in the PMD file presented as possibly implicating Iran in past nuclear-weapons research. But there are many non-nuclear weapons uses for EBWs, especially for an oil-rich nation like Iran. One manufacturer of EBWs explains that these have “…applications in explosive welding of piping and tubing, seismic studies, oil well perforating & hard rock mining.” Furthermore, Iran was not secretive about its work on EBWs. As the November 2011 IAEA report states: Iran “provided the Agency with a copy of a paper relating to EBW development work presented by two Iranian researchers at a conference held in Iran in 2005. A similar paper was published by the two researchers at an international conference later in 2005.”

The Agency, however, noted, “Iran’s development of such detonators and equipment is a matter of concern…” It really is not a major concern given the other civilian (and conventional military) uses of EBWs, and Iran’s relative openness in pursuing the technology.

Mohamed ElBaradei, the Nobel Peace Prize laureate who spent more than a decade as the director of the IAEA, summed it up well after leaving office, saying that he had not “seen a shred of evidence” that Iran was pursuing the bomb. “All I see is the hype about the threat posed by Iran,” he concluded.

So why is the IAEA pressing Iran on dubious evidence garnered from adversarial intelligence agencies and not accepting Iran's contention that at least some of the evidence could be forged, as even a former IAEA director and inspector argue may be the case?

The answer may be simple, if surprising: there is not much nuclear-weapons expertise at the IAEA. And for good reason: the Agency's safeguards job has to do with nuclear-materials accountancy, not nuclear weaponry. Nuclear-materials accountancy involves the timely detection of diversion of nuclear material from peaceful activities and the Agency is highly skilled in this duty. Importantly, it has never accused Iran of diverting such material to any weapons program.

But what is currently happening is that IAEA nuclear-material-accountancy experts are trying make technical judgments on weaponization work with which they are not familiar. As Tariq Rauf, the former head of verification and security policy coordination at the IAEA, and Robert Kelley argue in Arms Control Today:

“Resolution of the outstanding questions about [PMD] requires a broad set of skills. If a very small team of accountancy experts, unfamiliar with conventional arms, construction sites, and common practices in nuclear weapons studies is allowed to analyze the data, the team may envision nuclear activities because that is all it knows. This led to the disaster of U.S. claims that aluminum tubes destined for Iraq in 2002 were for centrifuges when they actually were for rockets, and it can happen again.”

So the problem arises when the Agency veers from its job of nuclear-materials accountant to try to take on a bigger role of nuclear-weapons investigator, for which it has no mandate, little in-house skill and insufficient funding.

Indeed, there are only a couple of inspectors with nuclear-weapons experience at the IAEA—and even they are forbidden from working on Iran's file, because Iran objects to Western inspectors. Odd as it may seem, IAEA member states are allowed to veto certain inspectors from inspecting their facilities. In fact, states may forbid all inspectors of certain nationalities from working on their files.

Iran, for instance, has a blanket ban on IAEA inspectors from the United States, United Kingdom, France, Canada, Germany and possibly other nationalities. Unfortunately, Iran may be shooting itself in the foot: by barring these people from examining its file, Iran may be excluding those very people who have sufficient weapons knowledge to exonerate it from the trumped-up claims.

The situation with imagery analysis at the IAEA may be even more severe: according to a source intimately familiar with IAEA procedures, the safeguards section depends on a single person who was, until a few years ago, a technician on the computer help desk. He went from being a senior clerk to top “P-5” staff-level diplomat within a decade—anomalously fast. This may help explain why the IAEA's imagery analysis on the Parchin site in Iran has been poorly received by technical experts, myself included.

And this appears to be a problem in general with the IAEA safeguards section: management depends on one or two people to make key judgments. So, for example, they may turn to a single centrifuge expert on staff for all answers and advice. Instead, management should be soliciting a variety of opinions, red teaming, co-coordinating with knowledgeable staffers in other sections and should generally be more open to constructive criticism, both from within the Agency and from outside analysts.

Reforming the IAEA’s structure to encourage "matrix management" across the various sections, and rebalancing the funding streams to remove “potential conflicts of interest” should be seriously considered to improve the agency’s professionalism. Bringing in a new IAEA chief who is seen as more apolitical than the current one could also be helpful.

The IAEA should also urgently revisit whether it will continue to accept intelligence from third parties—particularly non-NPT member states. Most importantly, perhaps, the Agency should clarify what it sees as its overall mandate: is it going to be the technical nuclear-materials accountancy shop it was originally supposed to be, or is it trying to morph into a nuclear-weaponry investigator? If the latter, it will need enormous injections of the relevant weapons skills, manpower and a much bigger budget. The technologies under discussion are complex and remain outside the experience of most IAEA safeguards staff and all upper management.

In the short term, Iran should consider relenting on its blanket ban of Western IAEA inspectors: if even a couple of experts with weapons knowledge are able to critically examine the “PMD” file, they may be able to quickly exonerate Iran from at least some of the allegations. In turn, the IAEA should revisit whether it will continue to press Iran on the PMD issues, and not accept Tehran's contention that some of the material is forged. If, instead, the Agency wants to pursue Iran on this, it should urgently vet the PMD file using qualified, outside weapons experts.

Failure to do so could unnecessarily sour the prospects for a comprehensive nuclear deal that would be in everyone's interest. With only a couple of weeks to go before the November 24 deadline, there is little time to waste in setting the record straight on allegations surrounding Iran's past nuclear work.