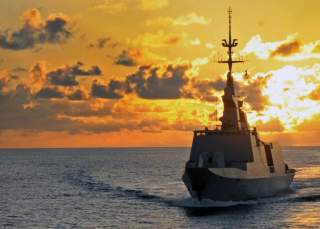 The pursuit of contesting regional orders by major powers has engendered a strategic environment of uncertainty and mistrust in the Indo-Pacific. As geopolitical developments at land and sea feed off one another, the maritime domain has been marked as the latest theater of war. These dynamics have been most evident in the East and South China Seas, where the complexity of issues at hand is telling. A case in point is China’s construction of military facilities on artificial islands proximate to disputed maritime areas, against a backdrop of contesting interpretations of international law.

As regional and extra-regional states face a rising China on all fronts, a climate of strategic anxiety prevails in anticipation of its potential impact on the existing rules-based international order. Such anxieties inevitably spill over into the Indian Ocean Region and manifest in ways unique to that part of the world. A rising India with aspirations to global-power status finds its regional dominance challenged by China’s two-ocean strategy and Belt and Road Initiative. In the maritime realm, India’s response comprises internal naval and port modernization, and increased naval engagements and exercises with neighboring littorals and external powers that have major stakes in the region. This has not, however, had any noticeable effects in tempering regional anxieties.

Heavy maritime traffic in increasingly congested regional waters operate alongside this tense backdrop. The risk that various surface vessels could collide—whether naval or commercial—and the risk of submarine accidents is on the rise. A number of regional and extra-regional states have forward-deployed their navies in the Indian Ocean, independently or as part of various task forces. There have already been several maritime accidents involving warships and air crashes in the Persian Gulf and the northern Arabian Sea between regional and extra-regional navies—some of which escalated politically. The Iranian Navy, for instance, has confronted its smaller neighbors and the U.S. Navy by conducting high-speed naval maneuvers and missile firings, and it has used drones to shadow U.S. naval assets. Late last year, an Indian submarine attempted to enter into waters close to Gwadar Port and was reportedly repelled by the Pakistan Navy.

Miscommunications and misperceptions are likely to result from such incidents and could escalate very fast to negative political and military expressions. It is against this setting that a code of conduct (COC) for the Indian Ocean was first proposed.

A COC for the Indian Ocean was first articulated earlier this year by the prime minister of Sri Lanka—one of the smaller, yet strategically placed, littorals in the Indian Ocean. A COC was seen as an essential precursor to good order at sea and for handling the emerging traditional and nontraditional security complexities offered by a fast-changing regional landscape.

The primary scope of a COC in this region is clearly expected to be related to the conduct of naval vessels and aircraft traversing the Indian Ocean. During the Lankan prime minister’s February 2017 lecture, he emphasized foremost the need for a stable legal order for the freedom of navigation and overflight. He cautioned that differing interpretations of the United Nations Convention on the Law of the Sea and the shifting balance of power in the region negates the original utility of the existing legal system. Inter-state conflict and unilateral control of the global commons may follow, so there is a pressing need for new mechanisms that can accommodate the evolving strategic landscape.

Discussions on what a COC would entail, however, have been more ambitious. The COC has at times being tasked with tackling nontraditional-security issues, like human and drug trafficking, and sea piracy and maritime terrorism. It has also been flagged as an appropriate avenue for governance over emerging “blue economy” activities such as seabed mining, hydrographic surveying and bioprospecting. A COC, typically considered as a confidence-and-security-building measure, risks overreaching by taking on practical operational cooperation outside its jurisdiction. Attempting to address maritime issues across such a broad spectrum also runs the danger of becoming a meaningless catch-all framework.

How Will It Be Implemented?

The Indian Ocean Rim Association (IORA) is currently the only regionwide mechanism designed to facilitate government-to-government dialogue at the multilateral level. Of late, the association has gained considerable momentum, as member states such as India, Australia and Indonesia, among others, have committed greater resources to revitalize this regional body. South Africa, the new association chair, revealed in a recent country statement that regional maritime safety and security was the first of its three priorities, and that it would lead to the establishment of a working group on Maritime Safety and Security. It pledged a financial contribution of approximately $150,000 to the association to fund the establishment of new working groups on the blue economy, maritime safety and security, women’s economic empowerment, and the International Core Group of Tourism, as per the IORA Action Plan 2017–21. An additional $50,000 was to be allocated in support of the African oceans economy projects under the 2050 African Integrated Maritime Strategy. The association appears, therefore, to be the most suited platform for an initiative such as the proposed COC.

However, there are the risks of a potential mismatch between regional perceptions of the association and its actual capabilities. IORA is not highly institutionalized, and is more of a coordination (than implementation) body. The association’s decisions also require consensus by all twenty-one member states. Given the diversity of interests that occupy each subregion within the Indian Ocean Region, this is likely to preclude regionwide consensus on a COC. This is reflected, for instance, in the varying priorities of each IORA chair, which at times prevents continuity of initiatives. It is also important to note that there are still some key Indian Ocean littoral states that are not members of the association (Djibouti, Maldives, Myanmar, Pakistan and Timor Leste), primarily due to a lack of capacity.

A key question that needs to be asked here is the role of extra-regional states in the development of a COC for the Indian Ocean. Will regional powers like India be open to the idea of external states like China participating in the formation of a COC? Will the COC be effective if major extra-regional powers are excluded? Should non-state stakeholders also be involved? Khurana points astutely that varying strategic alignments of different Indian Ocean Region states could lead to geopolitical polarisation, exacerbated by lobbying by external stakeholders.

ASEAN-China Code of Conduct for the South China Sea: An Ill-Suited Blueprint?

Indian Ocean developing states, and the Indian subcontinent in particular, have long aspired to model after the success of Southeast Asian counterparts. It is not surprising then that the ASEAN-China code of conduct for the South China Sea is considered a suitable blueprint for a COC in the Indian Ocean.

The ASEAN-China COC seeks to establish a rules-based framework and norms that guide the conduct of parties and ensure safety and freedom of navigation and overflight in the South China Sea. Should maritime incidents occur, the COC aims to manage them and create a favorable environment for the peaceful settlement of disputes. More specifically, it aims to promote (1) the duty to cooperate; (2) promote practical maritime cooperation—these are likely to include search and rescue, maritime scientific research, environmental protection, and combating transnational threats; (3) promote self-restraint, trust and confidence; (4) incident prevention (through confidence-building measures and hotlines); (5) incident management (through means such as hotlines); and (6) other undertakings in accordance with international law, to fulfill the objectives and priorities of the COC.

More detailed analysis of this COC, however, may cause the observer to rethink its suitability as a model for the Indian Ocean. The Indian Ocean is a unique regional space, with its own geostrategic complexities and diverse set of actors; success within ASEAN may therefore not be as easily replicated. More important however is shortcomings of the ASEAN-China COC itself, most notably in the absence of enforcement and arbitration mechanisms, characteristic of most ASEAN documents. The framework concluded in August this year has been dismissed as “a skeletal one-page outline, consisting of a series of bland principles and provisions, some of which China has already violated, and a few operational clauses—the ones that ought to be the focus of a meaningful, binding COC of any sort—that have been left vague.” Moreover, the COC remains to be concluded, and with its efficacy untested, questions its credibility as a model in the first place.

Is a Code Of Conduct Really Necessary for the Indian Ocean?

Currently, there are several mechanisms in place within the Indian Ocean Region that seek to maintain good order at sea and address transnational maritime threats. The most recent and prolific of these is the 2017 Jakarta Concord, which was concluded during the first IORA Leader’s Summit in March 2017. The Jakarta Concord aims to build a more peaceful, stable and prosperous Indian Ocean Region through enhanced cooperation, which includes—but is not limited to—six priority areas that put first maritime safety and security.