Why the "Mitt Romney for President" Talk Won't Die 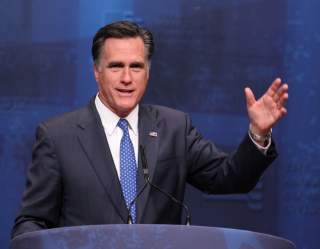 Will Mitt Romney run again for president? The question seems absurd. Aside from a single commanding debate performance against President Barack Obama, he was not a very good candidate in 2012.

After failing in his first attempt at gaining the Republican nomination four years earlier, Romney struggled across the finish line against weak, underfunded primary opponents whose best days were mostly behind them. He then promptly lost to Obama in November.

In fact, Romney has only won one general election in twenty years of running for office. He will be fourteen years removed from that lone victory in November 2016. His overall electoral track record is frankly less impressive than Harold Stassen’s.

Yet the speculation won’t go away, even if some find it ludicrous. There are a few reasons for this. First, despite Romney’s protestations—asked by the New York Times if he planned to run again, he replied “No, no, no, no, no. No, no, no”—he’s maintaining an awfully high profile for a defeated politician who currently holds no office.

One minute he is in the news criticizing Obama—and 2016 Democratic front runner Hillary Clinton—on Russia and Ukraine. The next he is accusing the president of “fundamental dishonesty” concerning Obamacare. After that, he’s munching burgers with Jimmy Fallon. The man is practically ubiquitous.

Romney has also remained active supporting Republican candidates running in the midterm elections, even taking sides in contested primaries. While some of that is to be expected of party elders, Pat Buchanan reminds us in his new book The Greatest Comeback: How Richard Nixon Rose from Defeat to Create the New Majority, that Nixon’s 1966 campaigning proved critical in getting him a second shot at the GOP presidential nomination.

Finally, there does seem to be at least a little bit of grassroots support for Romney. A “Draft Mitt” petition has claimed over 56,000 signatures. Two recent polls have showed Romney with a commanding lead in New Hampshire, including one where he trounces previous Granite State frontrunners Chris Christie and Rand Paul.

Utah Republican Rep. Jason Chaffetz, a Romney friend, flatly predicted his man Mitt will run again in 2016—and win. Saying Romney “has been proven right on a lot of stuff,” Chaffetz concluded, “I think he will be the next president of the United States.”

Stranger things have happened. In his maiden run for office, Romney lost to Ted Kennedy by 17 points in 1994. While this was the Democratic stronghold of Massachusetts, that year the Republican governor and lieutenant governor were reelected with 71 percent of the vote and the Republican state treasurer was reelected with 62 percent.

That was still considered good enough of a showing against the liberal lion of the Senate for Massachusetts Republicans to travel to Utah hat in hand more than a half a dozen years later to essentially beg Romney to run for governor. Jane Swift, the Republican acting governor at the time, was deeply unpopular and unlikely to win a full term. Polls showed her losing to all the top Democratic gubernatorial candidates, while Romney was beating them all. Romney accepted their entreaties, Swift stepped aside, and he was the next governor of Massachusetts.

That said, it is very hard to look at how difficult a time Romney had in beating Rick Santorum, Newt Gingrich, and a virtual merry-go-round of self-immolating conservatives and think he has a shot against a field potentially including Christie, Paul, Jeb Bush, Marco Rubio, Scott Walker, Bobby Jindal, and his 2012 running mate Paul Ryan.

If a conservative candidate who could compete with Romney’s money and organization on anything like even terms—think Rick Perry before the fall—could have held it together, it’s likely Romney would have lost the nomination in 2012. (Perry clearly is entertaining the idea of a second presidential candidacy.)

Romney’s 47 percent of the vote against Obama is certainly better than he did against Kennedy. If minority turnout receded to its pre-Obama levels, all other things being equal, he would have a steady shot at a Democratic candidate. But Romney failed to come anywhere near as close as either Nixon or Al Gore did. It was the close, disputed nature of their defeats that kept Nixon’s comeback possible and rumors of a Gore comeback alive.

Perhaps like Sarah Palin last time around, Romney realizes that the possibility he will run maximizes his power and influence within the party even if he never ultimately takes the plunge. (Also like Palin, he seems to have learned next to nothing from his defeat.)

In politics, anything is possible until Dick Morris predicts it will happen. But I’d bet against Romney 2016 ever getting off the ground.