Why Is the New York Times Lying about Trump? 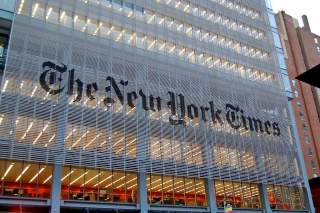 Even amidst a cacophony of nearly nonstop media fusillades against President Trump, the New York Times’ charge has stood out. After months of stories presenting Donald Trump as a sexual predator, business fraudster, puppet of Vladimir Putin, tax dodger, walking emolument disaster and whatever else it can dream up, the New York Times called Trump a liar in a prominent headline—proclaiming “Meeting with Top Lawmakers, Trump Repeats an Election Lie.”

Speaking in a closed door meeting with congressional leaders, Trump had apparently claimed that he would have won the popular vote were it not for the votes of millions of noncitizens. After escalating this bit of semi-private braggadocio into “a lie,” the Times justified itself three days later, explaining somberly that it had not made the charge lightly, but that it “ultimately chose more muscular terminology” instead of terms as “baseless” or “bogus” because, as editor Dean Baquet stated, Trump had made a similar assertion months ago in a tweet. “We should be letting people know in no uncertain terms that it’s untrue.” Times opinion columnists, who—with the notable exception of Ross Douthat—have for a year seemed to write about little else than how despicable Trump is, followed up, rolling around passionately with the L word. “Our president is a pathological liar. Say it. Write it. Never become inured to it,” wrote Charles Blow, in one instance among many.

Of course President Trump doesn’t know how many people voted illegally, but, in a country where millions of undocumented immigrants are commonly accorded driver’s licenses, access to public benefits and other accoutrements of civic normalcy, and after President Obama gave a pre-election interview to Hispanic media in which he seemed, in lawyerly fashion, to minimize the legal consequences of voting illegally, all while urging higher turnout, it’s difficult to believe the number is nugatory.

It clearly galls the new president that he lost the popular vote. So he repeats random speculations about voter fraud (though Rep. Steve King’s assessment of the extent of illegal voting strikes me as meriting serious examination) and inflates them. He does much the same thing in the even less essential question of the size of Trump’s inaugural crowd (plainly smaller than Obama’s in 2008). He does it in extolling the excellence of his very good golf courses. If one speculated about why Trump bothers, one might surmise that he thinks his supporters expect—and deserve—some pushback against a media determined, from the outset, to paint, as far as possible, his presidency as partially or wholly illegitimate.

In other words, Trump did what politicians do routinely: take more credit than they deserve, make an unsubstantiated claim, stretch the truth. Trump probably does it a little more. And New York Times editors conclude that instead of being a so-what issue, or fodder for a Saturday Night Live skit, it should be elevated into a “lie” to serve as the “not my president” talking point of the week, until it is replaced by a new one. (It was replaced by Trump’s doubling down on a previous Obama order pausing admissions of refugees from certain Muslim-majority countries, a policy that went virtually unnoticed when Obama did it in 2011.) The increasingly interlocking alliance between the establishment media and the protest left is a new phenomenon, one that hasn’t been seen in America since the radical 1960s.

When does a politician’s unsubstantiated statement merit being labeled a “lie”? The line between political misrepresentation and lying is not always a bright one. When, in 1988, Bob Dole accused George H. W. Bush of “lying about his record” (after taking a pounding from Bush’s attack ads in New Hampshire), the remark was taken as evidence of Dole’s hot temper, not Bush’s lack of veracity. When an official gives deliberately false or misleading testimony under oath before Congress, it is commonly deemed more serious, and if discovered has serious legal consequences. If the question is generally murky, one thing is clear: a casual and unsubstantiated political boast gets turned from a “so what” into a “lie” when the paper publishing it has fully internalized its role as part of the opposition.

Yet one might have thought that, given its recent history, the Times would be more careful about making such claims. Twice in recent memory, the Times has felt the need to publicly acknowledge its failings to readers about matters regarding its journalistic mission, that is, about presenting a true picture of the world. The most recent (and more benign) came five days after the election, when in a letter to subscribers, publisher Arthur Sulzberger Jr. and executive editor Dean Baquet, vowed to “rededicate ourselves” to honest reporting, “striving always to understand and reflect all political perspectives and life experiences in the stories we bring to you.” It was a tacit admission that the Times had failed in its horserace reporting, which up until Election Day had emphasized stories like the frazzled and unprofessional nature of the Trump effort, in contrast to the finely honed Hillary ground game and the surging anti-Trump Latino vote. On election eve, Times “data-driven” estimates had placed Hillary’s chances of victory at 84 percent, but a Times reader would have been hard put to explain how there could be any doubt about the outcome at all, so missing were respectable arguments for Trump from the paper’s pages. The final pileup came on the morning after, when the headline acknowledging Trump’s victory seemed to parody the solipsism of the paper’s editors. “Democrats, Students, and Foreign Allies Face the Reality of the Trump Presidency.” The editors could not bring themselves to acknowledge that the nation’s voters had opted for fundamental change and upended an election scenario long assumed inevitable by bicoastal elites.

In the interceding two months, some flashes of the Times’ pledges to cover the Trump phenomenon with more objectivity were apparent: one report on women who voted for Trump allowed them to speak in their own words, as did a recent story on voters who backed Trump’s immigration restrictions. But emphasis on “the lie” illustrates that in its present incarnation the Times is not going to reform itself. The paper’s reporters, editors and columnists—with a handful of exceptions—harbor a visceral hatred for Donald Trump and feel it their higher calling to act on their hate in everything they put in the paper. When it comes to Trump’s ties to Russia, the paper has acted upon the thinnest of evidence to lodge the most sweeping of claims against Trump. Is it lying, or just engaging in reckless hyperbole?

However biased the Times’ Trump coverage, the consequences were mild compared to the paper’s record in the run-up to the Iraq War. In the year prior to the invasion of Iraq, the Times published numerous front-page “scoops” based primarily on fake facts leaked to its reporters from Iraqi defectors whose goal was to spur an invasion of Iraq. Judith Miller wrote several stories promoting disinformation from the notorious fabricator Ahmed Chalabi and others in his network; so, too, did the Times give credulous play to the most alarming (and incorrect) administration interpretations of Saddam’s effort to procure aluminum tubes. As some media analysts have pointed out, numerous voices in the intelligence and nonproliferation world doubted the claims reported in the Times scoops, and tried to warn the paper. The Times customarily ignored them, or buried skeptical voices in small paragraphs deep inside the paper.

A year after the invasion, after no “weapons of mass destruction” had turned up, the Times acknowledged in an editor’s note that its coverage was “not as rigorous as it should have been.” It explained that “editors at several levels who should have been challenging reporters and pressing for more skepticism” failed to do so. In short, the Times had printed a great deal of what might fairly be called “fake news.”

Unlike many political untruths, the Times’ false Iraq coverage was enormously consequential. As perhaps the principal voice of the liberal establishment, it played a critical role in persuading the leading Democrats to go along with the hawks in the Bush administration while marginalizing those who challenged the administration’s war plans. The results are all too tragically evident. The conflagration pushed by the Times has left the Middle East in havoc fourteen years later. Millions of people have been killed or displaced, vast refugee flows that threaten to destabilize close allies have been unleashed, hundreds of thousands of American veterans have been left permanently disabled. Given that its own lack of truthful reporting had an immeasurable and tragic real-life impact on the lives of tens of millions, one might have hoped the Times would be more circumspect about how it characterized Trump’s transparent and inconsequential boasts about the size of his Inauguration Day crowd or the degree of voter fraud. And if the president’s concerns about voter fraud are indeed baseless, it would be logical for the Times to support voter-identification measures that would render them moot.

The bottom line is that if the Times is determined to create a new standard for what constitutes lying by a president, then the newspaper cannot exempt itself from that standard either. The Times, in other words, has been repeatedly lying for months about Trump and for years about other matters. Is that really a path that a paper that purports to contain “all the news fit to print” really wants to embark upon? Apparently so.