Why the Offensive against ISIS in Mosul Could Be a Disaster 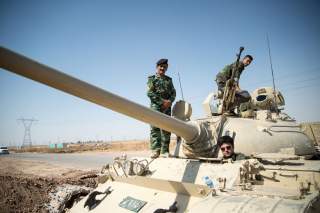 Speaking at a press conference in New York on September 19, President Obama stood at the dais with Iraqi Prime Minister Haider al-Abadi, and said that the battle for Mosul was ready “to move forward fairly rapidly” and that “we are prepared to help provide rapid humanitarian assistance.” The President and Prime Minister, I believe, are underestimating the challenges and difficulties that will result from the exodus of hundreds of thousands new refugees once the military operation to clear Mosul begins.

As mentioned in this post on September 19, I visited northern Iraq in late August and interviewed the Minister of Foreign Relations for the Kurdistan Regional Government (KRG), the Peshmerga general in charge of overlooking the Mosul front, and visited two refugee camps, including the newest called Debaga. My original intent had been to assess the military preparations for the recapture of Mosul. But I was struck with how much these two men emphasized the humanitarian element of the battle. Minister Falah Mustafa Bakir said that at the moment in northern Iraq there was a “humanitarian crisis,” but if actions aren’t taken by the international community quickly, it would become “a humanitarian catastrophe” once the battle begins. General Bahram Yassim, commander of the Peshmerga 7th Brigade, said he was concerned because he had yet to see anywhere near enough actual preparations on the ground.

I contacted the United Nations Office for the Coordination of Humanitarian Affairs (UNOCHA) to get an update on the progress of getting sufficient supplies. In an email message from September 8, UNOCHA officials said they made a flash appeal to the international community earlier this year in which they said $284 million was urgently needed just to establish enough camps to take care of the expected flood from the Mosul fighting. As of that email message, however, they had only received “a total of US$66 million as paid contributions and commitments towards projects assisting displaced people.” They did not know if or when they might get the balance of the request.

The flash appeal noted that the UN needed the $284 million at least two and a half months before the initiation of the assault to enable them to set up the camps. Yet according to recent reports U.S. military officials believe the Iraqi government could order the beginning of the attack before the end of next month. Even if the UNOCHA got all the funds tomorrow, it is virtually assured that they won’t be ready to care for the expected hundreds of thousands of refugees when the fighting begins in earnest.

It is understandable that the Iraqi government wants to wrest control of Mosul from the Islamic State, but it is important that they not be impatient. If the operations begin before UN and local authorities are ready to receive and care for that many displaced persons, Mr. Mustafa’s worries of a humanitarian catastrophe could be realized.

If the Iraqi government eventually succeeds in repelling ISIS from Mosul yet cause severe hardship or even loss of life because they launched the attack before they were ready to safeguard the inhabitants – most of whom are Sunni Muslims – the Shia government of Iraq might have trouble after the battle in gaining the support of the population. Governing post-ISIS Mosul is going to be difficult under any circumstances.  Baghdad must do all in its power to earn the trust of the people so that a new Sunni insurrection doesn’t form among angry residents later.

Image: Peshmerga on a T-55 tank outside Kirkuk in Iraq. Wikimedia Commons/Boris Niehaus