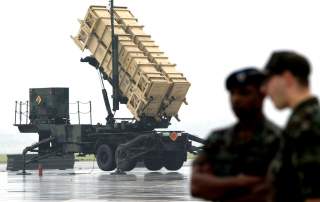 It does not. Even shooting down simple, short-range missiles like Scuds is extraordinarily complex. It is exponentially more difficult still to shoot down a long-range missile like the ones North Korea is testing. Compared to these sophisticated, ocean-spanning missiles, modified Scuds, like the one that forces in Yemen shot at the Riyadh airport, are large, slow and usually launched from fixed sites. Still, Saudi Arabia could not hit one after firing five interceptors at it, according to new reporting from The New York Times and analysts at the Middlebury Institute in Monterey.

Basic Scuds are designed to fly about three hundred kilometers. To increase the range, Iraqi engineers in 1991 lengthened the missile and lightened the warhead. This seems to be what the Yemeni engineers did to produce the “Burqan-2” Scud variant used in this attack. This increases the range to about six hundred kilometers, but it has the unintended effect of destabilizing the missile in flight.

In the Gulf War, a launch would carry the Scud out of the atmosphere into a brief flight in space. It peaks at about one hundred kilometers altitude and then falls back towards earth. As it reenters, the nose of the Scuds, instead of pointing downwards, were often too light and thus the missile hit the air flat, like a paper airplane without a paper clip to keep it aerodynamic. The resulting stress tore the missile apart. It would disintegrate, sometimes in great fiery tumbles, sometimes streaking like a comet with pieces trailing behind.

The Patriot computers in the Gulf War misinterpreted this break-up. It depicted on its screen not one but two, three or a dozen Scuds streaking in towards the Patriot fire unit. It looked to the troops buttoned up in the small control van as if one missile had blossomed into several, now diving into the area they were supposed to defend. They followed protocol and would launch one or two interceptors per target (or the computers would take over and automatically fire the missiles).

Observers outside would often interpret the explosion of the Patriot’s warhead as evidence that it had intercepted its target. But the PAC-2 warhead is designed to explode in front of its target, spraying shrapnel it hopes will hit. The Patriot has to explode with a few tens of meters of the warhead to have any hope of hitting it. In case after case, the Patriots would be launched at relatively slow-flying debris from the disintegrating missile, whose warhead had often detached and would spiral in toward the ground. Crews would get “probable kill” symbols on their computers and, if there were no reports of damage (they rarely went outside to check), they would declare a confirmed kill. When they examined debris from the Scud, they thought the Patriot had caused the damage, when it was just the heat and stress of the reentry.

That is precisely what seemed to have happened in Riyadh . . . again. The Iraqis in 1991 and the Houthis in 2017 modified the Scuds and created—by accident—a stealthy, fast-flying, maneuvering reentry vehicle cloaked by decoys. It’s accuracy is very poor, but it is also impossible to hit. In 1991, software fixes were rushed into the field, but about half of the 158 Patriots fired in that conflict were likely fired at false targets and debris.

Further analysis will be needed to determine exactly what happened this time. But complicating this autopsy will be who does the analysis. In 1991, most of the after-action analysis was done by officers from the Patriot Program office and officials from Raytheon, the prime contractor for Patriot. Until there is independent evaluation of the effectiveness on our missile defense systems, and until these systems are rigorously tested in real world operating conditions, we can not have any confidence that the systems will perform as advertised.

This is not just a good government issue. American soldiers lives could be unnecessarily endangered if they are deployed in future conflicts based on inaccurate assessments of our missile-defense capabilities. They may depend on Patriot battalions destroying almost all of the enemy missiles, as now claimed, when the actual defensive capabilities may mean that the battalions could actually miss almost all of the threatening missiles.

If such systems are promised to defend large areas or even nations, then we risk entering into war in the mistaken belief that we have a shield against the enemy’s missiles when all we have is a sieve.

Image: U.S. soldiers stand near the launcher of a Patriot Advanced Capability-2 (PAC-2) system during a demonstration at a South Korean
airforce base in Suwon, about 46 km (28.7 miles) south of Seoul September 18, 2003. REUTERS/Kim Kyung-Hoon