Why the Pope Is Right about Nuclear Weapons 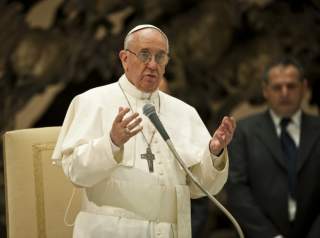 In his wide-ranging address to the United Nations General Assembly in New York last week, Pope Francis delivered a powerful and notable call to action for governmental leaders to accelerate progress on steps to reduce and eliminate the grave threats posed by nuclear weapons to human life.

An ethics and a law based on the threat of mutual destruction—and possibly the destruction of all mankind—are self-contradictory . . . There is urgent need to work for a world free of nuclear weapons, in full application of the non-proliferation Treaty, in letter and spirit, with the goal of a complete prohibition of these weapons.

Francis’ comments build upon long-standing Catholic teaching about the immorality of nuclear weapons, which do not discriminate between combatants and civilians and produce global catastrophic effects. Vatican officials have warned that “nuclear deterrence can hardly be the basis for peaceful coexistence among peoples and states in the 21st century.”

Speaking to the International Atomic Energy Agency on September 14, a top Vatican official pointed to the Comprehensive Nuclear Test Ban Treaty (CTBT) as “the best hope of stemming nuclear proliferation and is a key to progress on nuclear disarmament.”

Although the message from the Catholic Church about pursuing practical steps to achieve a world without nuclear weapons is not new, it comes at pivotal moment.

As former defense secretary William Perry warned earlier this year: “We are about to begin a new round in the nuclear arms race unless some brake is put on it right now.”

Vatican officials have argued that precisely because of the growing tensions between nuclear-armed nations and the risk additional states may acquire nuclear weapons, there must be renewed action for global nuclear arms control and disarmament, starting with the nuclear test ban.

Nearly all of the world’s nations recognize that nuclear explosive testing is no longer acceptable. To date, 183 states have signed the CTBT, including the United States, Russia, the United Kingdom, France and China; 164 states have ratified.

Yet the treaty has still not entered into force some two decades after its completion due to the failure of eight states to ratify, including the United States, which has not conducted a nuclear test explosion for more than twenty years.

In 1999, the U.S. Senate, after only a brief consideration, rejected its ratification and has not taken up the issue since. Fifteen year later, the concerns raised by some Senators have been fully addressed. For example, the global monitoring and verification system for the CTBT, which was in its early days in 1999, is now essentially complete and provides very high confidence any nuclear test will be detected.

Over the past two decades, a robust stockpile stewardship program led by the U.S. national labs has enabled U.S. nuclear scientists to determine with very high confidence that U.S. nuclear warheads work as designed without detonating them.

Even some of those who opposed ratification of the treaty in 1999 have come out in favor of the agreement. George Shultz, the secretary of state under President Reagan, has said that his fellow Republicans "might have been right voting against [the treaty] some years ago" but they would "be right voting for it now."

Because there is simply no technical or military need to resume testing ever again, ratification of the treaty would not hinder U.S. nuclear readiness.

On the other hand, the CTBT would establish an additional barrier to prevent the development of new types of nuclear weapons by established nuclear-weapon states, including Russia, China, India and Pakistan.

The CTBT is also an essential part of an effective global strategy to prevent the further spread of nuclear weapons. North Korea, which may soon conduct its fourth nuclear test, needs additional nuclear tests to perfect new types of nuclear warheads. Global entry into force of the CTBT would also create an additional barrier against a future Iranian nuclear bomb.

In 1991-1992, Congress approved legislation that helped bring an end to superpower nuclear testing. The United States led efforts to negotiate the CTBT and was the first to sign the treaty in 1996. Renewed U.S. leadership is needed to reinforce the taboo against nuclear testing and to bring the CTBT into force.

During his first term, Obama repeatedly pledged to work with the Senate to reconsider the treaty, but has done too little to build support since then.

Now is the right time for President Obama, other responsible world leaders and thoughtful senators to redouble efforts to close the door on nuclear testing. On September 29, foreign ministers from some 100 countries met at the United Nations to press for action on the Comprehensive Test Ban Treaty.

With the Pope’s message in mind, the conference should be a launching point for a powerful, high-level, ongoing multilateral diplomatic campaign to increase diplomatic efforts to create the conditions for ratification by key states in the next couple of years, particularly China, Iran, Israel and United States.

Pending the formal entry into force of the treaty, the United States and the other states observing nuclear testing moratoria, along with the UN Security Council, should explore new approaches to reinforce the global taboo against nuclear testing and clarify that nuclear test explosions by any nation are a threat to international peace and security. For example, Britain, China, France, India, Pakistan, Russia and the United States could jointly issue a formal joint statement committing not to be the first of the seven to conduct a nuclear test explosion.

Pope Francis’ call to eliminate nuclear weapons threats is one that U.S. leaders should take to heart and act upon.