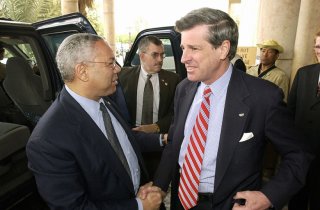 The insults against Donald Trump and Hillary Clinton have hogged the headlines about Secretary Powell’s leaked emails. Yet buried in the release lays a fascinating exchange about Ambassador Paul Bremer, who served as President Bush’s Presidential Envoy to Iraq. Superficially, Powell’s email exchanges are about disbanding the Iraqi army and de-Baathification. More significantly, they reveal two issues deserving examination: White House leadership and how the Iraq experiment glossed over conservative small government orthodoxy.

It underscores the terribly undisciplined nature of Bush administration policy decision-making. Fundamental questions hung in the air. Who was in charge of the war, for example? Yes, everyone claims to have had the lead on this policy or that; or, more accurately, all complained that the “other guy” had the pen. Powell made precisely this point, “Bremer worked for him. . . It wasn’t State, it was the President and the guy who reported to Paul [Wolfowitz].”

How is it that thirteen years after the supposedly critical decision of disbanding the Iraqi army our Secretaries of Defense and State and the national security advisor still bicker about who made it? Indeed, a legal answer exists about who reported to whom, but, clearly, the principals disagreed—and still do—about who made policy decisions. The situation groaned for White House intervention, yet, too often, the White House stood on the sidelines. The Defense and State Departments experienced this situation on issue after issue.

To a vast degree, Iraq was a process, and not just a policy failure. Ultimately, this kind of question should land in the Oval Office, but when fundamental policies go unanswered, squabbling commences. During the war, it seemed that every week brought a new leak, a new senior official speaking out of school, or an exhausting, catty argument targeting someone else through the press. Real policy arguments and unresolved decisions laid the foundations for this drama, and, absent a decision from “the decider,” the “team of rivals” fought. The constipated decision-making ended up spreading beyond Iraq.

Of course, raising questions about the Bush administration performance does not exactly plow new ground. But usually, the conversation leads towards discussing specific policy decisions. Should we have disbanded the army, for example? Consider just how fundamental Powell’s complaint is: he complains not that the U.S. should have chosen one policy over another; rather, he stresses that Bremer did not report to the State Department.

I suspect the topic receives less attention because of the boredom factor or maybe because people do not want to be seen insulting President Bush. Perhaps, too, dissuading discussion are (legitimate) fears that any examination will inevitably lead to paranoid and pointless finger pointing. Once the Democrats summoned the courage to oppose the war their criticism journeyed straight to the paranoid. Michael Moore became their spokesman, and the Democrats’ narrative permeates any discussion still. Even Donald Trump echoes some of that nonsense when we hear him claim that Bush lied to start the war. Sober analysts shudder at the thought of reopening that can of worms. “Bush lied, people died.” Silly. Inaccurate. But whatever.

Future governments need to understand the mistakes made at the White House and how to avoid them? Not policy. Process.

Clearly, the issue remains unresolved. Never again should our senior-most leaders feel disempowered during a time of war. That is a process and leadership issue. A policy project as big, deadly and expensive as Iraq requires a decisive, orderly process.

Even if we had had a strong process, however, could we have achieved success?

This brings us to the second question raised by Powell’s email. How did the Iraq war comport with the most fundamental tenet of conservatism: big government does not work? It did not. At all.

Here, we must be careful not to be sidetracked by the nonsensical debate about “neoconservatism versus non-interventionism.” Stick to the more boring question of government capabilities. Does our sprawling government have the ability to do what we attempted in Iraq?

That it cannot should be one of the Iraq lessons—not for moral reasons, not for Constitutional nor even theoretical reasons. Rather, our government is not designed for it; it’s too cumbersome and too big. Government bureaucracies bring a minimum level of stasis and frustration unsuited for a war zone. Iraq reconstruction dwarfed Obamacare in size and scope, but I rarely heard the conservative canon cited in opposition to the war.

We see Powell’s exchanges re-litigate various hiring decisions. They misses the mark on a fundamental level. Powell does not ask how much of the Iraq story belongs to the inherent chaos and bureaucratic nature of government.

Our embassy in Baghdad was the largest U.S. embassy in the world. It endeavored to coordinate with thousands of soldiers from the United States and dozens of other countries, thousands of contractors hired by a dozens agencies, and a fledgling Iraqi government. Critically, none of the above are designed to rebuild a country. The Defense Department encompasses nearly 3 million soldiers and civilians. The State Department has missions in every country on earth. Institutions like that do not excel at changing missions on the fly. Square pegs and round holes compounded the usual dysfunction present for any government undertaking.

No amount of planning, no amount of Shia-Sunni comity nor a fully functional Iraqi army would have eliminated the billion nagging problems that haunted the U.S. efforts in Iraq.

For example, the Defense and State Departments did not have the legal authority to spend small amounts of money on local development. They could spend billions but not thousands. Think: school computer labs versus power plants. Both the secretaries of defense and state had to personally appeal to Congress to grant this authority more than five years into the war. One more. Our corps commander in Iraq had to spend time figuring out how the government could temporarily hire a date palm specialist who could advise on how to spray pesticide on date palms. Really.

The reconstruction of Iraq bred these types of issues. And mind you, people with neither the training nor the legal tools to deal with them wrestled with solutions while being shot at. The people working these issues were capable, even brilliant, but never underestimate government’s ability to defeat even the most motivated and quick-witted policy entrepreneur.

Instead of these more tedious issues, most insufferable debates about the Iraq war pit someone angry about the Iraq war against a defender, and the argument surrounds the question of whether U.S. foreign policy should hew closer to nebulously defined non-interventionism. Pointless.

And too often arguments happen solely amongst wonks, but we should want broad public engagement. After all, sons, daughters, neighbors, friends fight and die on the front lines. And while your average voter likely has no interest in decision trees and flowcharts, America needs more people to engage on Iraq. Simple conclusions like, “The president and his staff should have been more decisive” or, “Big government solutions do not even work in the United States, so why would they work in Iraq?” surpass by miles conclusions that lead to isolationism and nativism.

Powell’s exchange about Bremer opens the door to a more useful discussion about Iraq. Voters should understand that our bureaucracies, such as they are, simply will never be up to the task of undertaking a project like Iraq.

God forbid the United States find itself in another war, voters should feel confident that the nation learned valuable lessons from Iraq. Merely asserting that the U.S. should avoid wars does not help. Nice sentiment. Totally unrealistic. And while you average passer-by will doubtfully engage in a debate about decision theory, anything improves upon our current national dialogue about Iraq.

Granted, Powell does call Paul Wolfowitz “a f--king liar,” but if we look past that and the sadly familiar discourse about Trump and Clinton, Powell’s exchanges contain a useful nugget meriting further dialogue.