Why the Putin Peace Plan Is Working 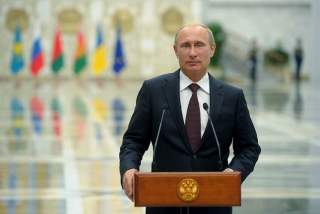 Despite extraordinary obstacles, the Minsk accords, more appropriately known as the Putin peace plan, are actually working. Just when it seemed that continuing violations might lead Ukrainian president Petro Poroshenko to abandon the ceasefire, as he had once before, he doubled down with a slew of laws and personnel changes that indicate just how seriously he is now committed to negotiating a resolution to the conflict in eastern Ukraine.

It was not always so. Poroshenko ran for office in May on a platform of negotiated peace, but once in office, he found little support for negotiations among his key supporters. The head of parliament, the prime minister, the minister of interior, even his own national-security team all favored expanding the “anti-terrorist operation” begun by his predecessor in April. With U.S. backing and military advisors, Poroshenko quickly became convinced that military victory could be attained in a matter of “hours.”

Initially, the operation to pacify eastern Ukraine was marred by troop defections, lack of equipment and poor coordination. By the middle of the summer, however, Ukrainian forces seemed to have turned the corner and were pushing the rebels back on all fronts. Then, in late August, the unthinkable happened—Ukrainian troops suffered a disastrous defeat in the town of Ilovaisk.

The exact details of what went wrong have not been made public. According to Semen Semenchenko—the commander of the volunteer “Donbas” battalion that led the assault on Ilovaisk—after having taken the city center, Ukrainian forces were surrounded by the rebels and totally cut off. Russian media sources suggest that as many as 7,000 Ukrainian soldiers were trapped, along with several hundreds of military vehicles.

Semenchenko claims that the Ukrainian military lost over 1,000 men in that battle, a claim disputed by Ukrainian defense minister Valeriy Heletey, who says that only 107 Ukrainian soldiers died. Ukraine’s General Prosecutor, by contrast, says that “no fewer” than two hundred soldiers lost their lives, and several Ukrainian newspapers reported that fatalities numbered in the hundreds. Only a personal plea by President Putin to allow the besieged Ukrainian soldiers a “humanitarian corridor” to leave prevented even more casualties. Both Heletey and the head of the General Staff were forced to resign.

In a subsequent television interview, President Poroshenko blamed the catastrophe on two key Ukrainian military units who abandoned their posts during the battle. The governor of Lugansk, Gennady Moskal, who had previously served as minister of internal affairs, claimed that the special internal affairs battalion “Kiev-2” had also deserted the field of battle.

For their part, local unit commanders blamed the rout on the lack of adequate support from the Ukrainian military. Several are now standing for election in political parties opposed to the Poroshenko Bloc. Still others have said that, after the military conflict subsides, they intend to march on Kiev and hold political authorities there accountable for the collapse of the war effort.

Ilovaisk is clearly a turning point. It has forced Kiev into direct negotiations with the rebel leadership, something that it had vowed it would never to do, and the Minsk protocol signed on September 5 is the direct result.

But even such a spectacular military setback would not have led such a dramatic reversal of policy, had other political actors not already been active behind the scenes to convince Poroshenko to abandon the military option.

In the midst of this crisis, for example, President Poroshenko visited Washington, plainly desperate for military and economic assistance. He left with a mere $53 million, an amount that, as one analyst notes, suffices to support the war effort for about nine days. Ukraine’s inability to secure meaningful military assistance at such a critical juncture, was no doubt seen by Poroshenko as a signal to change course.

European leaders, meanwhile, were sending similar signals of their own displeasure with Ukraine. After months of saying that there could be no negotiations with Russia over the content of the EU Association Agreement with Ukraine, in August, the EU’s chief trade negotiator, Karel de Gucht, suddenly declared that while it could not change the substance of the agreement, it was willing to “change the rhythm” to accommodate Russia’s concerns.

At the same time, EU officials also hinted that while Ukraine could not join the Customs Union and also be part of the EU, it might be able to join the Eurasian Economic Union, which is scheduled to replace the Customs Union in January 2015. Moreover, at a conference in Kiev in mid-September, Stefan Fuele, the European Commissioner for Enlargement, even suggested that the EU and the Eurasian Union should begin negotiations aimed at creating a common market. By the end of the month, the EU unilaterally decided to delay implementation of key parts of its association agreement with Ukraine until January 2016.

Equally dramatic has been the EU’s decision after Minsk to support all of Moscow’s key terms in its ongoing gas dispute with Ukraine: payment up front of a substantial part of the existing debt, and prepayment of future gas sales at Russia’s minimum price—$385 per thousand cubic meters. The EU even agreed to guarantee a loan from the IMF to help pay off part of the debt.

A similar shift in Germany’s stance can be gleaned from foreign minister Frank-Walter Steinmeier’s comments welcoming the new appointments of EU Foreign Minister and NATO. He chastised their predecessors in unusually blunt language, saying: “I found that some things that came out of Brussels, from NATO headquarters, in these last few weeks weren’t always helpful.” In August, while German chancellor Angela Merkel argued vigorously against the permanent basing of NATO combat forces in Eastern Europe, Vice Chancellor Sigmar Gabriel publicly backed the concept of federalization as “the only practicable way” to preserve Ukraine’s territorial integrity. By mid-September, Reuters quoted a German government official as saying that while Berlin could understand Ukrainian actions, Poroshenko needed to recognize that “there can't be a military solution in the east.”

With so many signals of the new “Ukraine fatigue” appearing in the space of just one month, the writing on the wall was unmistakable—after Ilovaisk, all the external parties were in agreement that Kiev would have to negotiate directly with the “terrorists.”

To make this concession to Moscow’s key demand more palatable, Putin cooperated with the OSCE to provide the framework for negotiations, having the Russian parliament rescind his authority to send troops into Ukraine, and affirming that Donbass is and should remain part of Ukraine.

In the economic arena, he agreed to add a $100 discount on the price of gas that would allow Ukraine to survive the winter, to a renegotiation of the terms of the Ukrainian bonds Russian holds, to prevent default and even, according to Ukrainian presidential advisor Yuri Lutsenko, to possible joint funding with Ukraine of the reconstruction of Donbass.

In the military arena, Putin apparently encouraged the replacement of key rebel military leaders, withdrew more Russian troops from the border, tightened border controls and made the resupply of rebel forces harder.

Western pressure on Kiev to abandon its original goal of military victory in the east, in tandem with Russian pressure on Kiev to negotiate with the rebels, has thus produced the first real hope for a political settlement of this crisis. And while the media has focused attention on the sporadic fighting that still occurs in the region, the bigger story is that overall casualties have subsided dramatically, military staffs on both sides are now in daily contact, trying to resolve points of conflict, and thousands of refugees have started to return home.

The peace process, however, is still very much in its infancy, and there are many, many ways in which it can be derailed. The upcoming parliamentary elections on October 26, for example, could prove to be a major setback for peace.

While the Poroshenko Bloc is expected to gain anywhere from 16 to 35 percent of the vote, recent polls suggest that the parties hostile to the current ceasefire (Radical Party, National Front, Fatherland and Freedom) could together also obtain as many as 40 percent of the seats, if they reached their highest poll numbers.

While dominance of the nationalists is unlikely, there is no doubt that their influence will be magnified by the absence of the parties that traditionally defended the rights of Russian speakers. The latter are disadvantaged because 20-40 percent of people in eastern and southern Ukraine have said they will not vote, and because there will be thirty-five fewer seats filled in the upcoming parliament because of the inability to hold elections in Crimea and parts of Donbass, both traditional Russophone strongholds.

Second, several commanders of the volunteer battalions are running in these parties. Two are among the top candidates of the Radical Party, while seven are running on the list of the People’s Front. If elected, it is widely expected that they will support a resumption of the war effort.