Why the Republican Party Is Falling Apart 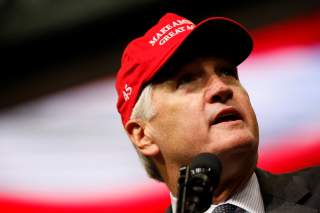 Barring what was once called an act of God, Roy Moore will be the next U.S. senator from Alabama. On Tuesday he not only beat his Republican primary runoff rival, incumbent senator Luther Strange, he beat Mitch McConnell and the GOP establishment as well. He even out-Trumped President Trump, who endorsed Strange but speculated loud at a rally last week that he might have picked a loser. Steve Bannon didn’t. The cashiered White House strategist and Trump campaign maestro put his money on Moore. He knew what he was doing: even if Moore had lost, supporting him would have helped cement Bannon’s reputation as a tribune of the grassroots right.

Moore was an unruly Supreme Court judge in Alabama, renowned—or infamous—for defying a federal court’s orders to take down a monument to the Ten Commandments he had placed outside his courthouse and later ordering state judges not to abide by the U.S. Supreme Court’s gay-marriage decision. Other right-wing Republicans talk the talk: federal courts have usurped democracy, exiled the Constitution, etc. Moore walks the walk. He acts as if he believes the things the right says are true, and he’s proved willing to pay a career price for doing so. Naturally, this is the last thing Republican leaders want to see in the Senate. But now they’re hanged—ideas, even at the crude level of political rhetoric, have consequences. Moore has called the GOP’s bluff.

Roy Moore, like Donald Trump, is the conclusion that follows from the GOP’s ideological premises. Moore is surely going to be a tax-cutter, just as Trump is a deregulator or at least a nonregulator. But if talk radio, TV, Drudge, Breitbart and every other right-leaning media outlet and outside political aspirant is warning of Sharia coming to America, enemies abroad plotting our nuclear annihilation, cops shackled and criminals coddled in our cities, God thrown out of the public square and transsexuals lurking in every lavatory, how can tax cuts or free-market economics be what matter most? Republicans have been told that they are fighting a dozen existential wars at once, for body and soul. Is Luther Strange the man to grab the devil by the horns? Is Jeb Bush?

It’s easy for elite Republicans and progressives to proclaim their disgust at what the GOP has become—the party of Trump and Moore, not the Bushes and Romneys. But the reaction against the GOP right is itself histrionic and puerile; there’s nothing adult about it. Imagining that alarmed grassroots Republicans are tantamount to Nazis or cannibals is both an exaggeration and an evasion. It’s an exaggeration for obvious reasons: few right-wing Republicans pose any kind of a threat to their black or gay or Muslim neighbors, just as few of those neighbors pose any threat to white Christian heterosexuals. And the caricature is an evasion precisely because it’s not serious. For all the idle talk about how extreme the GOP has become, the political establishment really does believe that everything is going to return to normal—to the natural order of things, with people like themselves on top—sooner rather than later. Trump was supposed to be a fluke. A Luther Strange was supposed to be able to win.

Those who mock Moore and who mocked Trump do not, even now, recognize the peril they are in. Its source lies not in the moral or intellectual failings of the great American public but in their own failures as leaders and caretakers. A narrative of apocalypse can gain a foothold because there is no credible narrative of normality any more. The pre-Trump GOP, after all, was the party of the Iraq War, Romneycare/Obamacare, the Great Recession and a party entirely lacking in either the will or the ability to defend middle America against stagnation and cultural demonization. The nice guys have a lot of blood on their hands, and that goes for Obama and especially the Clintons as well as the Bushes.

Moore and a great many of his voters subscribe to a simplistic and exaggerated view of the world and the conflicts it contains. Moore has voiced the belief that Christian communities in Illinois or Indiana, or somewhere “up north,” are under Sharia law. That’s absurd. But why does he believe it, and why do voters trust him despite such beliefs? Because on the other side is another falsehood, more sophisticated but patently false: the notion that unlimited Islamic immigration to Europe, for example, is utterly harmless, or the notion that Iran is an implacable fundamentalist threat while good Sunni extremists in Saudi Arabia are our true and faithful friends. Each of the apocalyptic beliefs held by a Roy Moore or his supporters contains a fragment of truth—or at least amounts to a rejection of some falsehood that has become an article of faith among America’s elite. The liberal view of the world to which Democrats and elite Republicans alike subscribe is false, but the resources for showing its falsehood in a nuanced way are lacking. Even the more intellectual sort of right-winger who makes it through the cultural indoctrination of his college and peer class tends to be mutilated by the experience. He—most often a he—comes out of it embittered and reactionary or else addicted to opium dreams of neo-medievalism or platonic republics. Since there are few nonliberal institutions of political thought, the right that recognizes the falsehood of liberalism and rejects it tends to be a force of feeling rather than reflection. Moore, of course, has a legal education, and he assuredly reads the Bible. He’s not unintelligent, but he cannot lean upon a well-balanced and subtle right because such a thing hardly exists in our environment. Yet there is a need for a right nonetheless, and so a Roy Moore or a Donald Trump fills the gap. There is only one thing the Republican establishment can do if it doesn’t like that: reform itself from stem to stern.