Why the Rich Will Reap the Benefits of Trump's Tax Reform 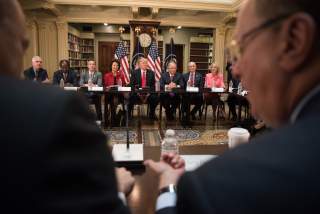 Trump continues to break with convention. Last week’s tax reform/cut proposals arrived on a single sheet of paper with none of the usual analysis, argument or graphics. For all this simplicity, he gave everyone plenty of material, most of the promises he made during his campaign, including massive tax cuts, especially for corporations, and the elimination of many deductions, though fewer than he had once implied. There were a couple of surprises, too.

Proposals on the individual code would make it simpler and somewhat more equitable. The administration would conflate today’s seven tax brackets into three, taxed respectively at rates of 10 percent, 25 percent and 35 percent, all down from present levels. The proposals would double the standard deduction, adding a progressive element, since lower-income filers use that deduction more than higher-income filers. But in other respects, the proposed changes would favor those higher in the income distribution. The White House would, for instance, eliminate the alternative-minimum tax, the gift tax, the estate tax and the 3.8 percentage point rider on capital gains taxes imposed to help fund Obamacare. All these changes would benefit the wealthy much more than others. The administration’s plan would also continue with deductions for retirement savings, mortgage interest and charitable deductions, also used more by the wealthy.

Trump’s plan would, however, take some of this benefit back by eliminating most other tax deductions. Importantly, it would disallow the ability to write off state and local taxes. This would hurt all residents of high-tax states, such as New York, California, New Jersey and Illinois, but especially higher-income residents. Doubtless, the White House would argue that Washington, DC has no business subsidizing the decisions made in state capitals and city halls and that the increase in the standard deduction would benefit all Americans regardless of where in the country they live. There is reason in such an argument, but this provision also carries a hint of spite against the states that voted overwhelmingly against this president and that are more prone to defy his recent policies.

The corporate side of these proposals offers, if anything, even bolder change. This White House would cut the statutory rate from 35 percent presently to 15 percent. Contrary to earlier promises, this reduction would see none of the elimination of the many breaks in the current corporate code. On this score, reformers are no doubt disappointed. They have criticized the breaks, credits and eliminations in the present code as detriments to economic efficiency and growth. They argue that not only does this maze of exceptions discourage action by confusing decisionmakers about its tax consequences, but they also prompt business to respond less to economic considerations than to tax benefit. Still, in an oblique way the reduction in the statutory rate partly answers this complaint by making any deduction less valuable and so less compelling.

Two new elements appeared in this outline. One is the plan to change the fundamental way this country taxes foreign earnings. For years, the United States has followed a policy of taxing the global income of companies domiciled in this country. Earnings made in Europe or Asia would pay local tax and then, when repatriated, would pay an additional amount to top the levy up to the U.S. rate, which in almost all cases has been higher. Most of the rest of the world has followed what is called a “territorial” approach, in which corporations pay only the tax in the locality where their earnings originate. Until now, Trump has ignored this difference. The most he has argued for is a tax holiday for corporations to repatriate the accumulated earnings they presently hold abroad, recently estimated at $2.4 trillion. Now he has proposed that this country adopt the more commonly used territorial approach. The change would remove any future inclination for corporations to hold earnings offshore.

Second is a White House plan to allow small businesses, in LLCs and the like, to pass through their earnings at the low corporate rate of 15 percent instead of the higher individual rate. Though this change would level the playing field between large and small business, it would open the door to abuses in which people might set up dubious businesses in order to secure the low corporate rate for themselves. White House spokespeople acknowledged this risk at the press conference announcing the plans and assured all that the law would include language to thwart such abuse. They failed, however, to clarify just how the law would do that.

Though some of these tax-cut provisions clearly have offsets built into them, their size would all but ensure larger budget deficits for some time to come. Neither the White House nor any of Congress’ analytical resources has yet estimated amounts. It would, however, be easy to exaggerate this effect. The largest tax cuts and the fewest offsets would occur in the corporate area, and corporate tax amounts to only just over 10 percent of total revenues. At the same time, the White House seems to have exaggerated the economy’s likely response. Though tax cuts always boost growth rates, it is unclear that such a jump would produce, as the White House suggests, sufficient additional revenue to offset that lost to the net rate reductions.

It is, of course, still early days. Debate has only just begun, as has the inevitable posturing. Trump, the self-described “great dealmaker,” may have included some of the more contentious proposals, such as the low rate for pass-through earnings and the elimination of deductions on state and local taxes, as bargaining chips for future negotiations. If anything comes out of this, it will differ from these proposals, and all involved know that. In the meantime, the give and take will worry the public, move markets and provide reporters with copy.

Ezrati is contributing editor at The National Interest, an affiliate of the Center for the Study of Human Capital at the University at Buffalo (SUNY), and recently joined Vested as its chief economist. His latest book, Thirty Tomorrows, on how the world can cope with globalization and aging demographics, was recently released by Thomas Dunne Books of Saint Martin’s Press.