Why the Status Quo with Mexico Isn't Working 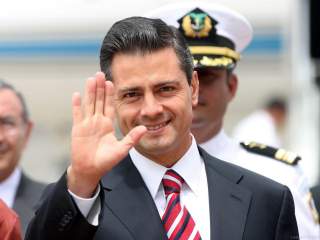 Aside from Hillary Clinton, the biggest loser in our presidential election was Mexico. In the winning campaign narrative, the United States exports jobs to Mexico, and Mexico exports poverty and crime to the United States, casting our relations with Mexico in zero-sum terms. If Mexico is gaining, the United States must be losing; an unfair characterization, but to many Americans, not without an element of truth.

Will the U.S.-Mexico relationship be treated as a major foreign policy objective for the new Trump administration, or will it be treated with benign neglect, as it has for the last several years? Initial signs suggest that President-elect Trump might prioritize Mexico, at least in the first part of his term.

Two of Trump’s major proposals directly impact U.S.-Mexico relations: building a wall on the southern frontier and renegotiating the North American Free Trade Agreement (NAFTA). Hyperbole aside, these proposals address legitimate concerns. We have a sovereign right to control our southern border, and we can renegotiate—or walk away from—NAFTA at any time. But treating both initiatives in just U.S. terms might damage our solid relations with Mexico and undermine other important aspects of Trump’s agenda, such as improved law and order and making America energy independent.

Therefore, maintaining a stable, prosperous and democratic Mexico must be a strategic priority for the United States. This cannot be achieved by maintaining the status quo. The U.S.-Mexico relationship has been a key feature of our geoeconomics—how we stay competitive with the rest of the world. But it needs to deepen. Mexico has real issues, with out-of-control violent crime and stalled democratic reforms. The United States can’t afford to ignore Mexico.

The key will be to convert a supposed zero-sum relationship into a positive-sum relationship, resulting in wins for both nations. These reforms should improve America’s strategic goal of remaining powerful and competitive in world affairs. Here are some suggestions on how Trump might do that, and a warning on the risks if he fails.

It pays to recall why NAFTA was initiated in the first place: to establish a grand North American trading bloc to compete with the European Union. This has been largely successful, resulting in more than $500 billion in goods traded per year, although the overall impact on the U.S. GDP has been modest. More important might have been NAFTA’s political impact in undergirding Mexico’s economic and political liberalization. NAFTA, initiated by President George H.W. Bush in 1990, backstopped the reform effort begun by Mexican President Carlos Salinas to open the economy and the political system. Mexico is a stable democracy today in large degree because of NAFTA.

NAFTA provided another benefit, often overlooked: it expanded the U.S.-Mexico “social field”— the interconnected private associations, business supply chains, and law enforcement exchanges that have grown and spread since NAFTA went into effect in 1994. It would damage the prosperity and security of both countries to interrupt these linkages.

Despite its unpopularity with unionists and economic nationalists, NAFTA’s dispute resolution system and liberal rules will help make Mexico’s new energy reforms, which give private oil companies access to Mexico’s 10 billion barrels of proven reserves, a success. In the future, and with the incentive of higher oil prices, Mexico’s increased output can help us maintain our energy independence from the unstable and authoritarian Middle East.

Presidential candidates often complain about NAFTA. Obama ran against it in 2008. But updating the agreement should not be an insurmountable problem. Last week the Mexican government wisely seized on Trump’s proposal, welcoming the opportunity to modernize NAFTA. Proposals to upgrade NAFTA could focus on infrastructure upgrades and better labor and environmental standards. Expect Mexico to emphasize increasing legal flow of labor too, which would be a natural, and necessary, complement to the trade agreement, but something that we’ve never seriously addressed.

Ironically, much of the debate over illegal immigration has occurred during a period when our southern border security has been improving. In the 1990s, policymakers decided that little could be done to improve border security. The 9/11 attacks changed that, and we began dedicating more resources to stop illegal immigration. Since 2001, we have stemmed the rising tide of illegal crossings. In 2015, illegal alien seizures were about 337 thousand, down from 1.6 million in 2000, according to Border Patrol data. During this time, net Mexican migration reversed, and, in 2014 for the first time more third-country nationals were detained at the border than Mexicans. We have stanched, but not stopped, illegal immigration.

The trick is to legalize and regulate the people flow. This must be done without disrupting the 48 official land ports of entry between the two countries. We need better guest-worker programs that would complement NAFTA and offer a realistic path to citizenship for illegal immigrants. Legalizing Mexican workers to get them out of the informal economy and on the tax rolls, would help pay for improved security. One way to provide such a path to citizenship might be to expand the opportunities for Mexicans to serve in the U.S. military.

Our border defenses don’t need so much to be high as they need to be deep. Immigration enforcement must extend through Mexican territory to Central America. This only works if we bolster Mexico’s internal cooperation. The Mexican immigration service needs strong backing, including a reinforced campaign to discourage immigration coming up through Central America. Illegal immigration is a problem for Mexicans too, as it feeds the crime gangs and contributes to illegal aliens in Mexico.

Helping Mexico to bring down drug trafficking mafias and reduce violent crime would pay dividends for the United States and fit with the President-elect’s aims. Mexican organized crime gangs are every bit as deadly and powerful as ISIS, and have a greater day-to-day impact on the United States. In the last few years, violent crime in Mexico is up, and American businesses are wary of Mexico’s security environment. Traffickers operate in all American cities and heroin use in the United States, much of it supplied from Mexico, is at the highest rate in 20 years, according to the UN Drugs and Crime Office.

Trump should pledge to go beyond the Merida Initiative, the $2.5 billion plan that began in 2008 to combat Mexican organized crime. The program supported police and, through other initiatives, managed to bring violent offenders, like the notorious drug trafficker Joaquin “Chapo” Guzman, to justice. Merida’s funding has been woefully inadequate given the magnitude of the problem. Compare Merida spending for our neighbor Mexico to our spending in remote Afghanistan, which, according to the Center for Strategic and International Studies, totaled $642 billion between 2001 and 2013. Alongside NAFTA negotiations, we should propose multiplying our aid to the Mexican police and judiciary to help raise them to U.S. standards.

Three great initiatives — modernizing NAFTA, deepening our southern border defenses, and doubling down on Mexico’s internal security—will help transform the relationship into a positive-sum for both parties. But if Mexico continues to be treated as a problem, relations could turn on the United States in a nasty way.

Countering the Looming Threat of the Mexican Left

Former U.S. Ambassador Jeffrey Davidow, in his insightful book on U.S.-Mexico relations, notes this offhand greeting from a Mexican politician: “How are you planning to violate our sovereignty today, Mr. Ambassador?” In negotiating with Mexico, we must bear in mind that many Mexican elites, especially those on the left, inherently fear and distrust the United States.

All negotiations must aim to strengthen our ideological allies in Mexico and prevent the Mexican left from getting traction in 2018. If we treat Mexico like a zero-sum relationship, we will confirm the left’s traditional, xenophobic narrative. The leftist presidential candidate Andres Manuel Lopez Obrador, known commonly as “AMLO,” has failed to win election before, but after years of neoliberal reforms, perhaps the system is due for a leftist resurgence.

AMLO’s opponents compare him to the late Venezuelan leader Hugo Chavez. An exaggeration perhaps, but many Venezuelans equally underestimated Chavez’s radical agenda and thought democratic institutions would restrain him. Ironically, AMLO, the perpetual outsider, might himself be emboldened by Trump’s improbable win.

If AMLO were to win the presidency in 2018, and he’d only need an electoral plurality to do it, he would work to reverse many of his predecessors’ liberal gains and move to weaken U.S. influence over trade and security. AMLO’s worldview sees the U.S.-Mexico relationship in zero-sum terms. His election might put Mexico back on our plate as a foreign policy problem.

Strengthening the U.S. relationship with Mexico can fulfill several achievements in Trump’s first term. Mexico’s cooperation is necessary on immigration, public security and energy independence. As president-elect, Trump has been invited to visit Mexican President Pena Nieto in Mexico, whose historic reform efforts have rivaled President Salinas’s from the 1990s. Pena Nieto is risking his legacy and the success of liberalization to make this relationship a success. Trump, with his telenovela lifestyle and pragmatic business sense, might be uniquely suited to win over Mexicans wary of his rhetoric and punitive policy prescriptions. Soon he will have an opportunity to make Mexico an early foreign policy priority, which would signal a welcome statesmanlike approach to the region and the world.