Why the Taliban Is Winning in Pakistan 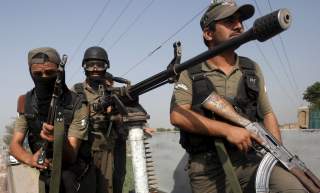 U.S. Defense Secretary James Mattis visited Pakistan in early December. The purpose of his trip was to give the Pakistani government a final opportunity to target the terrorist groups that are attacking Afghanistan and coalition forces, according to Voice of America. On October, Secretary Mattis told the House Armed Service Committee that the United States needed “to try one more time” to make its strategy work “by, with and through the Pakistanis.” If, in the end, its best efforts failed, then President Trump would be “prepared to take whatever steps are necessary,” he said. In response to the secretary’s remark, a Pakistani official, who spoke on the condition of anonymity, told Pakistan Today, an English-language Pakistani newspaper, that Pakistan has taken action against all terror groups inside Pakistan. However, the official’s statement is false. Gen. John Nicholson, head of U.S. and NATO forces in Afghanistan, has noted that the Taliban are still living comfortably in Pakistan. Pakistan hasn’t taken action against the Taliban.

In fact, Pakistan has significant interests in supporting the Taliban. The Taliban is an asset to the country. Christine Fair, an expert on South Asia at the Center for Peace and Security Studies at Georgetown University, has labeled the Taliban as a state proxy. At the Raisina Dialogue, Fair noted that these proxies operate with the Pakistani government’s support and “are tools of statecraft.”

Pakistan’s support for the Taliban is part of its long-term strategic goal of exerting significant influence in the region. Pakistan’s goal is to attain regional hegemony to counter India’s influence. Fair notes in her book, Fighting to the End: the Pakistan Army’s Way of War, that “Pakistan’s defense literature clearly maintains that Pakistan’s army aims to resists India’s position of regional dominance and its slow but steady global ascent.” To achieve that goal, Peter Tomsen, former U.S. ambassador and special envoy to Afghanistan, notes in his article published in World Policy Institute, that Pakistan seeks to “forge a broader Islamist bloc of Pakistan, Kashmir, Afghanistan, and eventually Central Asia to balance India, Pakistan’s traditional rival.” Pakistan is attempting to install a puppet regime in Afghanistan via its proxies. Pakistan’s success in Afghanistan would be a starting point for creating an Islamist bloc that would counter India.

Since the inception of the Afghan National Unity Government, Ashraf Ghani, president of Afghanistan, has put significant effort in attempting to convince Pakistan that Kabul is a reliable partner. The National Unity Government tried to work with its eastern neighbor to convince them that Islamabad can secure its interests in Afghanistan without proxies. According to Ghani, “I extended my hand to Pakistan, and they spit on it because they thought they could overthrow us. So let’s call facts facts.” In 2014, the Afghan government froze its requests for lethal weapons from India to relieve Pakistan’s security anxieties of an increase in Indian influence in Afghanistan. Since 2015, Kabul has sent its cadets to Pakistan for training to counterbalance the training offered by India. In 2015, the Afghan government signed an intelligence-sharing agreement with Pakistan to counter terrorism in the region. In 2016, Kabul gave its share of electricity from the regional CASA-1000 project to Pakistan due to the dire energy crisis in the country. Still, Islamabad views Kabul as an adversary.

Last month, Nicholson told reporters at a NATO meeting in Brussels that he hasn’t seen a change in Pakistan’s behavior or its efforts to eliminate the Taliban’s safe havens inside the country. Why is that the case? Why hasn’t Pakistan taken action against its proxies that target Afghanistan and the coalition forces? The answer is: the Pakistani military.

Academic research has shown that a state views the intention of its adversaries’ actions through the state’s individual and organizational biases/interests. Based on these biases, the state will subjectively refine and judge its adversaries’ intentions. In Pakistan, the army is the most powerful institution. Pakistan’s military runs the state’s foreign policy. A core belief of the army is that Pakistan is an insecure state. The army views all of its neighbors, except for China, as threats. Therefore, any sincere action from Kabul to improve its ties with Islamabad will be in vain. Pakistan will not view Kabul as a bona fide partner.

Furthermore, the Pakistani army benefits from maintaining Pakistan in a state of crises with its neighbors. The army exploits the perceived threat from Kabul and a rising India. These perceived threats justify the Pakistani army’s overarching role in the government. An article published in the New York Times notes that Pakistan’s former prime minister, Nawaz Sharif, was ousted because he pursued “conciliatory policies toward India as well as Afghanistan and by reportedly demanding that Inter-Services Intelligence end its use of militant groups as tools of foreign policy.”

According to Tomsen, Pakistan’s current “strategy exactly mirrored Pakistan’s strategy from 1994 to 1998, when Pakistan organized, armed, and sent thousands of Taliban, Pakistani, and other extremists into Afghanistan to overthrow the Mujahidin government in Kabul.” Since 9/11, Pakistan hasn’t changed its policies of supporting proxy groups. Therefore, the Afghan government and the Trump administration need to raise the cost for Pakistan’s pursuit of such policies. Currently, Pakistan bears no cost for pursuing such policy.

As President Trump said, “We cannot solve our problems by making the same failed assumptions and repeating the same failed strategies of the past. Old challenges demand new approaches.” The conflict in Afghanistan demands such a new approach. Giving Pakistan another opportunity to target the Taliban is a false hope.

Image: Soldiers arrive to repel an attack on an air force base in Peshawar, Pakistan, September 18, 2015. Taliban gunmen stormed a Pakistani Air Force base in the volatile northwestern city of Peshawar early on Friday, a military spokesman said, the first major attack on a military installation in several weeks. Reuters/Fayaz Aziz​