Why the United States Needs AFRICOM 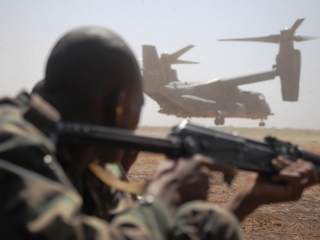 Africa is a continent suffused with problems and possibilities. The U.S. military footprint there ought to be smaller, not bigger. And that's precisely why we need the U.S. Africa Command (AFRICOM). Done right, AFRICOM can help the next president keep the American military role in regional affairs appropriately scoped.

My colleague Nile Gardiner and I first made the case for standing up Africa Command in 2003.

Four years later, the Bush administration did just that. And we’ve been periodically savaged by one critic or another ever since. Sometimes we’re trashed as neocon puppet-masters. Sometimes, we’re depicted as neocolonialists, myopically focused on "resource extraction and homeland security far above and to the detriment of the priorities of the countries of Africa."

Such criticism misses our primary rationale for establishing the command. We argued that the U.S. needed the command to ensure that America did less—not more—military intervention. Indeed, alarm over calls to insert American military forces into Liberia in 2003 is what inspired our initial article. In debating Jesse Jackson on The Chris Matthews Show, I was the one arguing against intervention. My takeaway from the whole experience was how poorly most of Washington understood the region’s security issues and challenges. U.S. policy ought to emanate from insight and sound situational awareness, not ignorance and guesswork.

Back then, Africa was a sub-responsibility of the U.S. European Command. That arrangement made no sense. Africa is too big a place, with too many issues that are far different from European affairs, to be managed effectively by a command that is not focused on the region.

While Nile and I had no expectation that more U.S. military was the answer to most of the region’s security challenges, our assessment was that Africa would need security assistance, particularly in dealing with transnational terrorism. To us, it made sense to establish a command to coordinate and deliver that assistance effectively.

Sadly, we were more than right. Transnational terrorist threats have mushroomed across swaths of Africa.

The rationale for the command remains as valid as ever. That is not to say that the command, or U.S. policy in Africa, isn't ripe for criticism. Arguably, the way the administration handled the war in Libya wound up dramatically worsening the transnational security threat, creating opportunities for Al Qaeda affiliates to emerge resurgent, and opening new territory to expansion by ISIS.

Furthermore, the Benghazi incident shows how ill served U.S. interests have been, and how the command has been misused. A more responsible administration would have acknowledged the deteriorating security situation in Libya and tasked AFRICOM with working with State’s in-country team. The scary situation on the ground should have dictated that they jointly assess the threat and prepare plans to deal with all predictable contingencies. Had this happened, AFRICOM would have had response forces at the ready. But it didn't happen. Brave Americans needlessly died.

By way of contrast, when Washington has let AFRICOM do its job, it has delivered good outcomes. The command’s work in Cameroon is a case in point. AFRICOM’s measured support has helped that nation build its counterterrorism capacity. While the initiatives there garner only occasional press coverage, that additional capacity was sorely needed and proved extremely helpful.

Ironically, what threatens AFRICOM’s future is not the floundering of U.S. policy under the current administration. It’s the need to rein in government spending. Many in Washington are looking at defense through the lens of an austerity budget, and some are looking at folding AFRICOM with several other combat commands (COCOMs). That would be penny-wise but pound-foolish. It would cost the United States an organization that can serve vital American interests in the region by planning, providing situational awareness, and engaging with appropriate granularity, responsiveness and capacity.

Arguing for keeping the capabilities of AFRICOM is not the same as demanding that the United States just stick with the status quo. There is a debate to be had about how to better organize U.S. engagement activities on a regional level.

Further, there is much carving to be done among the Defense Department’s bloated bureaucracy. But there are better approaches than gutting the capacity to oversee regional military activities effectively.

The truth is that the next president will need something that looks like AFRICOM.

Africa is mosaic of nations crisscrossed with conflicts. It is home to extraordinary natural resources and an exploding, often unruly youth population. Many nations lack economic freedom, a strong civil society and adequate public safety. That mixture makes for a wicked cocktail.

Moreover, China, Russia and India have so dramatically increased their involvement on the continent; the United States can’t be only half-prepared to deal with any likely contingency there. Eliminating AFRICOM, or folding it into another COCOM, would likely result in the U.S. military decreasing its focus on Africa at a critical time.

Islamist terrorism is undeniably on the rise in Africa. ISIS has carved out a presence in Libya and has powerful affiliates on the continent, as does Al Qaeda. Citizens from at least thirteen African countries have joined ISIS, and its affiliates have been active in at least eight countries on the continent. The United States cannot afford to diminish its focus on these threats, which is what would inevitably occur if AFRICOM were downgraded.

Downgrading AFRICOM would also send the wrong signal to our many allies on the continent. It would tell them, in no uncertain terms, that the United States no longer considers them—or their ongoing battles with our mutual enemies—to be important. Beyond demoralizing our African friends, this could lead our allies elsewhere around the globe to question the reliability of U.S. commitments.

Keeping AFRICOM is about retaining a modest and useful instrument to appropriately safeguard U.S. interests. Modest investments, a light footprint, and judicious policies—this is a sensible middle course between fighting everyone else's battles and downplaying problems that, if left unattended, could make their way to our shores.

James Jay Carafano is a vice president at the Heritage Foundation, where he directs the research on defense and foreign policy issues.