Why the United States Needs North Korea to Stay Nuclear 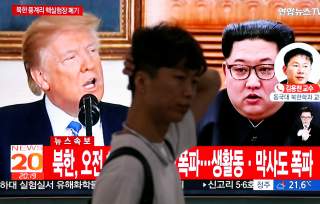 Many are hopeful that the June 12 summit in Singapore between President Trump and North Korean leader Kim Jong-un will lead to denuclearization and peace on the Korean Peninsula. Others believe the historical record makes clear that such a hope is overly optimistic. But what if allowing North Korea to retain its nuclear arsenal could both lead to peace and benefit America’s long-term security interests in the region?

There are two reasons for this. First, possessing nuclear weapons is the best way to pacify North Korea and constrain its aggression. Second, a secure and independent North Korea (without the presence of Chinese or U.S. forces) would also provide a buffer against great power tensions. The long-term primary objective of U.S. strategy in East Asia should be to contain a rising China. To achieve this, the United States must minimize Chinese influence on its neighboring states—whether they are U.S. allies or not. A limited North Korean nuclear arsenal is the most effective way to make this happen.

The United States should, therefore, continue reaching out diplomatically to North Korea and even end some sanctions to seek long-term stability. Contrary to the conventional wisdom, a nuclear North Korea and a balanced peninsula are the best possible outcome for the region and the world.

The View From Pyongyang: A Need for Balance

During the Cold War, the Soviet Union’s backing of North Korea and U.S. backing of South Korea were roughly equal, resulting in a stable power balance on the Korean Peninsula. However, since the Soviet collapse, the balance of power has rapidly shifted against North Korea. The United States continues to lead the Republic of Korea (ROK)-U.S. Combined Forces Command and regularly renews its security commitments in the region. In contrast, Russia abolished its alliance treaty with North Korea in 1994. China also refused to replace the Soviet Union as North Korea’s patron when the matter was discussed between Deng Xiaoping and Kim Il-sung in 1991.

Without this balance, the peninsula has been in prolonged instability and frequently came close to military confrontation. As a sovereign state ruled by a totalitarian regime, North Korea has shown its willingness to guarantee its security at any cost. Intensifying military and economic pressure against the North has only made it more defiant and unpredictable. Therefore, any solution to the present crisis must take into account the security of this sovereign nation. Clearly, massive militarization and isolation are not a long-term solution for North Korea.

Security guarantees from China are not a solution, either. Until recently, China's North Korea policy has been passive and minimal in commitment. Per the terms of its “friendship treaty” with North Korea, China is obliged to “render military and other assistance by all means at its disposal” in the event North Korea comes under “armed attack by any state.” However, China is not bound by this obligation primarily due to the treaty. Its primary motivation for intervention in North Korea is due to its security concerns—not those of the regime in Pyongyang. Beijing will lose more defensive capabilities if North Korea falls into the hands of an adversary, whoever it may be.

Yet, China does not intend to do anything more than is necessary to meet this policy goal. China’s reluctant relationship with North Korea may help it deter a large-scale invasion by ROK-U.S. forces, but does little to assuage other security threats. The ROK-U.S. combined forces have a rich set of military options with which to threaten the North. These include limited operations for punitive or coercive purposes that target North Korea’s vital industrial or nuclear facilities. American and South Korea even have the capacity for decapitation strikes. Furthermore, China’s options in assisting North Korea to cope with these threats are limited since it must always balance the strategic importance of North Korea with the economic importance of South Korea and its need to avoid overt confrontation with the United States.

North Korea itself has a clear understanding of China’s unenthusiastic role in its security. In a commentary published by Korean Central News Agency during the peak of last year’s crisis, North Korea made it clear that it holds its nuclear weapons dearer than its friendship with China. In short, the quiet alliance between China and North Korea does not ensure security to the North Korean regime other than preventing a massive military attack.

Therefore, not only do nuclear weapons offer a level of security that Chinese assurances do not, but they also are the most cost-effective way for a resource-poor North Korea to achieve sustainable security. A nuclear North Korea is not a threat, but an ideal stabilizer. The balance of power on the Korean peninsula and that between the United States and China are interrelated. China's rise has the potential to shift the regional balance, making confrontation more likely in the future. If a limited nuclear capability guarantees North Korea's existence and independence, it can provide a buffer space to keep Chinese forces in China and U.S. troops stationed in South Korea separate. If U.S. and Chinese forces were to face each other on the Korean peninsula directly, there would be a higher chance for clash and escalation, especially given already tense standoff the United States and China face in the East and South China Seas. Restoring the power balance between the North and South will not only stabilize the peninsula but also help manage the power relationship between the United States and China.

Some common concerns about a nuclear North Korea include the damage to the Non-Proliferation Treaty (NPT)’s authority and the domino effect of proliferation. Other worries also are a politically unstable North Korea losing control of nuclear weapons or a more emboldened and aggressive North Korea. However, the problem on the Korean peninsula relates to long-standing and complicated geopolitical issues, that the NPT was not necessarily designed to address. There is also no evidence to suggest that a rapid wave of proliferation would sweep the region as long as the United States maintains the status quo and strengthens its commitments in the region.

There have been four instances of nuclear states facing instability: the French General’s Revolt, the Cultural Revolution in China, the unseating of Bhutto in Pakistan, and the collapse of the Soviet Union. The record shows that no matter which domestic group gains control of the state, all parties show great restraint with regards to the use of nuclear weapons. The stakes are simply too high. As Waltz once put it, “obtaining nuclear weapons is a sobering event.” States become more aware of the negative attention they receive from the international community after acquiring the bomb and actually act more cautiously, and North Korea will likely do the same going forward.

Another concern is that an emboldened North Korea will use these weapons to force reunification under its terms. At the very least it is assumed that they will be more likely to engage in cross-border attacks such as the shelling of islands and the sinking of the South Korean ship Cheonan in 2010. But, these arguments do not account for the evidence suggesting that nuclear weapons are not useful tools of conquest or coercion. The overwhelming U.S. responses with both conventional and nuclear forces are enough to deter North Korea from engaging in any act of nuclear blackmail.

Even though Pyongyang's nuclear capability can hit targets in South Korea and Japan, these two countries should not worry too much about this nuclear threat. As explained above, this nuclear force is meant to close a power gap, not to give North Korea an offensive advantage. Research shows that atomic weapons are perfect instruments of deterrence, but poor instruments of coercion. Furthermore, North Korea declared a no-first-use policy in May 2016 and recently renewed this pledge in its Third Plenary Meeting of the Seventh Central Committee of the Workers’ Party of Korea. More importantly, the threat posed by North Korea can be alleviated if it is brought into a larger block, if even just a tacit one, to balance a rising China.

China’s security commitment towards North Korea has historically been minimal since the Korean War. However, recent tensions between Beijing and Washington and interactions between Beijing and Pyongyang suggest that China is no longer able to afford this minimal policy. In the future, it may be China that would seek to project power into a non-nuclear North Korea. Offensive realism would predict that a China more confident in its conventional capabilities may seek to directly balance the U.S.-ROK alliance by subjugating North Korea and basing Chinese forces on the peninsula. Eventually, it would try to expel U.S. forces from the peninsula, implementing its version of the Monroe Doctrine. Were it not for its nuclear deterrent, North Korea would be the most logical space for China to project power into due to its weak conventional military but strategically valuable location. A Chinese military presence in North Korea would not only undermine U.S. interests but regional and global stability as well.