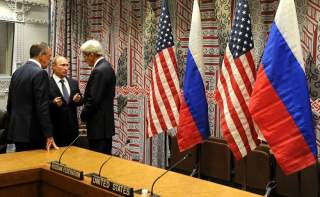 Tensions between Russia and the United States are coming to a head over the civil war in Syria. Washington has suspended bilateral talks with Russia to end the five-year old war. Moscow has suspended an agreement to destroy 34 tons of weapons-grade plutonium that was reached during the year 2000, using especially harsh rhetoric. Meanwhile, Syrian regime forces—with the backing of Russian airpower—are continuing to mount a fierce attack on the partially rebel-held city of Aleppo with Washington seemingly powerless to influence events on the ground.

As a result of the recent collapse of a ceasefire negotiated by Secretary of State John Kerry and Russian Foreign Minister Sergey Lavrov and the subsequent Syrian regime offensive, there are many in Washington clamoring for firmer U.S. action—a so-called Plan B. However, President Obama and his National Security Council staff are faced with limited options. Among the four options that may be under consideration are a no-fly-zone, safe zones, attacking the Syrian air force and arming the Syrian rebels with additional weaponry. But each option carries with it significant risk of escalation or blowback.

While the United States has the capability to defeat Russian and Syrian regime air forces and air defenses, which is necessary to establish a no-fly zone or safe-zone, or to destroy the regime’s airpower, there are several risks from a legal and military standpoint. The legal problem comes from the fact that the United States is not technically at war with the Syria, nor is there a UN resolution authorizing American forces to operate inside that nation.

Even ongoing U.S. military operations inside Syria are acts of war—and are technically illegal. The Obama Administration is aware of this technically as Secretary Kerry noted during conversations with Syrian rebel activists. “The problem is the Russians don’t care about international law, and we do,” Kerry told the rebels in a recording published by the New York Times. “We don’t have a basis—our lawyers tell us—unless we have a U.N. Security Council resolution—which the Russians can veto or the Chinese—or unless we are under attack from folks there or unless we are invited in. Russia is invited in by the legitimate regime.”

A no-fly zone or safe zone would require U.S. combat aircraft to intercept and possibly shoot down Russian and Syrian warplanes entering into the area designated by Washington and its allies. U.S. policymakers would have to make the gamble that Moscow—which is likely eager to avoid war with the United States—would back down and acquiesce to the American imposed no-fly zone. However, Washington is equally averse to fighting a war with the Russia, which, despite possessing only a fraction of the military might of its Soviet forbearer, remains the only power on Earth that can reduce the United States to charred radioactive cinders.

It is highly unlikely that any U.S. President would be willing to risk war against a nuclear-armed power with only four months left in office in a conflict with few—if any—vital American interests at stake. The Russians know that and might not be willing to back down in the event of an air-to-air confrontation with American forces because too much national prestige—and even Mr. Putin’s personal prestige—would be on the line. Thus, such an encounter could escalate in unpredictable ways. One only needs to look to history to demonstrate the unforeseen consequences stemming from relatively localized events—no one could have predicted that the assassination of Archduke Franz Ferdinand would have precipitated the events leading to the First World War in 1914.

Indeed, no less an authority than the Chairman of the Joint Chiefs of Staff Gen. Joseph Dunford testified before the Senate Armed Services Committee on September 22 that a no-fly zone—such as the one being proposed—would lead to war with Russia and Syria. “Right now, Senator, for us to control all of the airspace in Syria it would require us to go to war against Syria and Russia,” Dunford told the Committee. “That’s a pretty fundamental decision that certainly I’m not going to make.”

A worse option still would be for the U.S. military to attack the Syrian air force and its bases directly since it would an overt act of war against Syria—even more so than a no-fly or safe zone. As Secretary Kerry pointed out, without a U.N. Security Council resolution, the United States does not have legal grounds to go to war. But moreover, the military difficulties with directly attacking Syrian forces are more problematic.

The United States Air Force, Navy and Marine Corps could easily annihilate Syrian and even Russian air defenses—and airpower—inside Syria. Moscow—even with the fearsome capabilities of its S-400 air and missile defense system—is not able to defeat the U.S. Air Force’s fleet of stealthy Lockheed Martin F-22 Raptors, which are able to fly inside zones protected by those system and defeat them. In fact, defeating advanced air defenses is one of the Raptor’s primary missions. Nor would Russian Su-30SM or Su-35S Flankers survive long against the Raptor, which was specifically designed to counter advanced next-generation Soviet fighters that ultimately never materialized.

The problem is that the United States cannot know for certain if Moscow will idly stand by while American forces attack Syrian forces. Moreover, it is unclear how many Russian military advisors are embedded with Syrian forces and where those instructors are located. Some Russian advisors are present and operating within the ranks of the Syrian military, and if Washington launches a strike, those forces could be caught in the crossfire. However, Russian rhetoric suggests that Moscow won’t simply allow Bashar al-Assad’s forces to be destroyed. Russian foreign ministry spokeswoman Maria Zakharova was quoted by the Russian media saying that U.S. intervention against Assad “will lead to terrible, tectonic consequences not only on the territory of this country but also in the region on the whole.”

If the U.S. military does intervene in Syria, and Russian and Syrian forces fight back, American F-22s would likely be able to quickly eliminate the Russian S-400, Pantsir-S1 as well as Russia’s Su-30, Su-35s and Su-34s with relative ease. Conventional U.S. fourth-generation fighters such as the F-15, F-16 and F/A-18 would have to wait until the Russian-built air defenses—which, given the S-400’s nearly 250 mile coverage radius, encompass nearly the entire Syrian landmass—were cleared by stealth aircraft such as the Raptor and the Northrop Grumman B-2 Sprit strategic bomber. It is not clear if the long-range 40N6 is operational, but regardless, actions can have unintended consequences.

Russia might not limit its retaliation to just American and NATO forces in Syria. Given Moscow’s arsenal of Kaliber-NK cruise missiles and long-range bombers and submarines, the Kremlin has options to strike back across a huge geographic range. It is not outside realm of the possible that Russia would hit back at U.S. bases in Qatar, United Arab Emirates or Turkey using long-range precision-guided cruise missiles. The Russian Black Sea fleet and the Caspian Sea flotilla can easily hit such targets. Then there is Moscow’s formidable bomber fleet which can target the continental United States itself.

Thus, while it is easy to start a conflict with Russia and Syria, a shooting war could easily escalate out of control. It might be prudent to exercise restraint before launching a new war—against a nuclear-armed power—that the American people don’t necessarily want to fight. That’s especially true in a conflict where the lines are blurry and there are no clear-cut good guys—where even so-called “moderate” rebels backed by the U.S. government are beheading children. Under such circumstances, the best policy for the United States might simply be to leave well enough alone—there is simply no need to stick our fingers into yet another hornet’s nest.