Why the United States and Vietnam Urgently Need to Deepen Ties 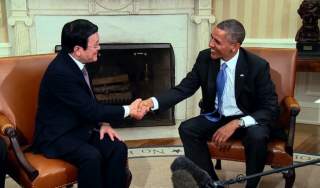 U.S.-Vietnamese relations have strengthened in the past few years, in large part due to common concern over China’s increased aggression in the South China Sea. But some parts of the relationship have progressed slowly—confirming China’s belief that it can continue bullying Vietnam as part of its push for regional control without sparking serious backlash. Indeed, China recently parked another oil drilling rig in Vietnamese waters, and just last week, it extended the rig’s operations for several months. But this latest provocation, together with China’s announcement last week that it will shift more resources towards its naval and aerial capabilities, may motivate the United States and Vietnam to develop several key elements of their burgeoning partnership.

In May 2014, just three days after President Obama ended a tour of Asia meant to reassure allies there, Beijing almost triggered a crisis near the disputed Paracel Islands, which lie in the South China Sea and are occupied by Beijing, but claimed by Hanoi. Backed by “a large number of vessels,” China placed a state-owned oil drilling rig roughly 80 miles inside Vietnam’s internationally recognized exclusive economic zone (EEZ), which extends 200 miles from its coast. Beijing argued that it controlled those waters because they sit within the EEZ created by the Paracel Islands. Vietnam intervened with about thirty ships of its own. A seventy-five-day standoff ensued and escalated, as China dispatched military forces to guard the rig and the countries repeatedly rammed and sprayed each other’s boats. China sank a Vietnamese ship and anti-Chinese riots erupted in Vietnam. China ultimately withdrew after completing its testing, but warned that it might return.

The United States called China’s moves “provocative,” but it levied no sanctions, continued to bar lethal-weapons sales to Vietnam, declined to mediate the conflict and sent no military forces to the area. Seeing a detached United States and recognizing China’s naval superiority, Vietnam downplayed the dispute with its largest investor and trading partner, labeling the conflict a “brother[ly]” disagreement and resuming military ties with China. With a stronger regional power unable to stop it and Washington sidelining itself, China signaled that its rivals should accept its inexorable rise.

To underscore this message, this past June, just weeks before Vietnam’s top leader visited the United States, China deployed the same rig in a different part of Vietnam’s EEZ (which overlaps with the EEZ created by China’s Hainan Island) to investigate natural-resource deposits there. Beijing admonished foreign ships to stay 2,000 meters (6,562 feet) away from the rig. The exploration was slated to end on August 20, 2015. But last week, China moved the rig closer to Vietnam (within 110 miles of its coast) and unilaterally extended its drilling for two more months.

China’s move is especially alarming when viewed as part of its ongoing pattern of aggression since the first rig standoff. Beijing announced this summer its completion of unprecedented land reclamation in disputed portions of the South China Sea and its plan to continue building military facilities there. In July, China staged an island assault in the South China Sea and scores of its warships (including nuclear forces) and planes fired live ammunition over those waters. Last week, in the Sea of Japan, China finished its largest naval exercise with Russia. Beijing paraded its latest military weapons this week to mark its WWII defeat of Tokyo, and announced that it would reduce its army’s size in order to focus more resources on its navy and air force, both of which are better at projecting power abroad. And for the first time, China is operating naval vessels off the Alaskan coast (within 12 miles of it), overlapping with President Obama’s trip there.

Recognizing China’s expansionism, the United States and Vietnam have taken modest steps to strengthen their ties. For instance, the countries increased the frequency of their joint military exercises and high-level government visits; the United States offered $18 million to boost Vietnam’s Coast Guard, and Washington relaxed on a case-by-case basis its ban on the sale of lethal arms to Hanoi.

Both countries want to do more, but neither the United States nor Vietnam has moved with the required sense of urgency. The Obama administration is reluctant to provoke Beijing, as demonstrated by its muted response to the first rig standoff and failure to travel through China’s alleged 12-mile territorial waters extending from its man-made islands in the South China Sea. Washington also fears cozying up to Hanoi given its poor human-rights record. Meanwhile, Hanoi is comprised of dueling pro-U.S. and pro-China factions. The latter group believes that China is more committed to controlling its own backyard than the United States is to policing a distant region. It thus questions Washington’s willingness and ability to stand up to Beijing, particularly because the United States is bogged down in other parts of the world and slashing its military spending.

But China’s latest provocation presents an opportunity to overcome these dynamics. Beijing is increasingly demonstrating to Hanoi that it aspires to regional hegemony and will trample the rights of any country that stands in its way, thereby providing a powerful argument to those seeking deeper U.S.-Vietnamese ties.

Vietnam’s pro-U.S. faction should immediately push to grant the United States greater access to Vietnamese military facilities. Vietnam can retain control of them, but it should grant American forces rotational access and allow them to build new infrastructure and pre-position equipment. Washington will be able to project power into the South China Sea more easily and Beijing will be deterred from harassing Hanoi. Vietnam should also grant the U.S. Navy more port visits (currently limited to one per year) and provide access to its most strategically important deep-water port, Cam Ranh Bay.

On the economic front, Hanoi should continue to implement the reforms called for by the Trans-Pacific Partnership (TPP), the free-trade agreement currently being negotiated among twelve Pacific Rim countries. By joining the TPP, Vietnam can reduce its economic dependence on China, thereby affording it greater freedom to pursue its own national interests even when they conflict with China’s. Finally, Vietnam must improve its human rights to foster stronger ties with the United States.

Washington, meanwhile, must reciprocate. First, even after slightly easing its ban on lethal-arms sales to Vietnam, the United States has been slow to shore up that country’s military capabilities due to human-rights concerns. The United States should continue to push Vietnam to improve its human-rights record, while making available to Hanoi maritime surveillance and other naval technologies, which do not threaten the Vietnamese people. Second, President Obama should make the South China Sea and China’s mistreatment of Vietnam central talking points during Chinese president Xi Jinping’s upcoming Washington visit, thereby signaling to Vietnam that the United States takes these aggressions against Vietnam seriously and is not shy about confronting China. Third, the United States should integrate Vietnam deeper into its other regional security relationships, including by encouraging it to co-develop weapons, inviting it to participate in multilateral military exercises and to conduct joint naval patrols, and incentivizing it to buy U.S., European and Japanese arms. Easing Vietnam away from Russian military technology (Moscow is currently Hanoi’s main arms supplier) would also bolster Vietnam’s interoperability with the United States and its allies and increase those countries’ military contacts. Fourth, the United States must conclude the TPP soon, which will benefit the United States and Vietnam, both strategically and economically.

Hanoi can become one of Washington’s best partners to counter Beijing’s rise. Vietnam abuts the South China Sea, and it borders China. It has the world’s fourteenth-largest population, thirteenth-largest active-duty military force, and as a proportion of GDP, Vietnam is Southeast Asia’s second-largest defense spender. The country’s economy is projected to become the world’s seventeenth largest in ten years. And Vietnam would be a strong military partner for the United States, having often successfully confronted bigger and better-armed foes.

The United States and Vietnam must elevate their relationship. Doing so will signal that the Washington remains committed to countering a rising China at a time when regional countries are hedging, uncertain of whether the United States has what it takes to stand up to Beijing’s aggression. A strong U.S.-Vietnam partnership may also help to slow Chinese expansionism by demonstrating how counterproductive its behavior is—even driving former foes to ally against it.