Why the U.S. Government Is No Longer Capable of Ensuring National Security 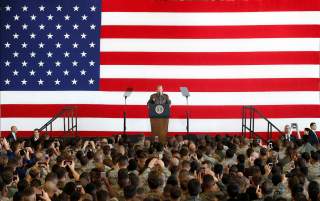 The U.S. government as currently structured and regulated is unable to guarantee the security of its country. This is true both in terms of wars involving combat with a peer or near-peer competitor and what we will here call “conditional-peer” threats, those able (A) to challenge or exceed U.S. capabilities, (B) in one or more functional or geographical arenas, but (C) not across all or most such spheres.

Successful national defense against the sophisticated, complex and highly-capable threats the United States will face through 2050 requires bringing to bear a comprehensive, or inter-organizational, approach to vital challenges. Many key adversaries are already redefining conflict to include hybrid strategies consisting of actions short of war but certainly within the realm of national competition and conflict. A new approach is required to counter these threats, protect U.S. and partner nation homelands, and defend common interests around the globe. This new approach should include not only U.S. military services but also interagency and whole-of-government capabilities, multinational partners, and additional objective-relevant parties likely to include nongovernmental and intergovernmental organizations (NGOs and IGOs) and select commercial enterprises.

Unfortunately, this approach is virtually impossible to achieve with today’s federal government structure. Recent contingencies have reinforced the reality that the military alone cannot win wars or execute those activities necessary to ensuring battlefield victories become strategic successes during subsequent occupations. There exists no overarching U.S. government entity with sufficient authority or control over funding to allow orchestration all functions such a coalition could bring to bear. That the United States is a democracy is undoubtedly a hindrance in this regard. Effective dictatorships are better configured to compel the coordination such orchestration requires.

Yet America’s democracy—and those of coalition partners and allies—does not present an insurmountable obstacle in this regard. That is good news as this discussion in no way seeks to suggest that the rights and privileges guaranteed in the Constitution should be undermined. It is rather the interpretation and evolution of resulting government structures that require change.

Competitors and adversaries already routinely capitalize on this shortcoming. China cannot today compete worldwide with America’s armed forces (although it is rapidly modernizing and extending its capabilities to challenge the United States in Asia and expand its reach beyond the Asian littoral). Chinese military doctrine revealed in 2015 calls for an “active defense posture” focused on winning local wars under what it terms “informationized” conditions. Like Russia and other competitors, the Chinese have sensed an opportunity to succeed in the “gray zone” between war and peace. They have and will continue to challenge in that space with a sophisticated information campaign married to a robust cyber capability and whole-of-government approach. China has clearly demonstrated significant conditional-peer capabilities via employment of its more or less centralized economy, diplomacy (recent promotion of the ongoing New Silk Roads initiative, for example), social/cultural policies (e.g., considering all individuals of Chinese ethnicity being answerable to the People’s Republic), and—relatively recently—more overt use of military means. The last at times seems but a deliberate distractor. Initiatives in the military realm, such as activities in the South China Sea, draw attention away from others in realms currently all but unchallenged by U.S. policies. There has, for example, been no perceived need to sail a U.S. economic aircraft carrier through world markets.

The Russians are arguably less adroit at such broad exercise of national capabilities than the Chinese although their use of economic levers to influence neighboring European nations and demonstrated capability to directly target democratic processes shows an appreciation for non-military means of addressing objectives. Military interventions in the Crimea and Ukraine reveal a tactical and operational-level capacity to act within their so-called “near abroad” to win localized concessions while at the same time posing regional challenges to the United States and its NATO allies. Intervention in Syria demonstrates an ability to deploy yet farther afield in the service of national interests. Hezbollah and Hamas have similarly exhibited conditional-peer social media use versus Israel, as have Iran and North Korea exercised competencies in select spaces. Readers can surely identify other examples.

Security, of course, is not merely a function of prevailing in war. War is a subset of conflict. Conflict is in turn a subset of competition. National security, and collective security with partners and allies, is a matter of obtaining and maintaining advantage over others whose objectives conflict with those of the West in relevant spheres, desirably during competition, necessarily in conflict, indispensably when at war.

What are the sources of this U.S. handicap? The current construct of its federal government encourages intra-organizational friction. The deliberate separation of powers in three branches as dictated by the Constitution is the most obvious manifestation. Less than optimally effective cooperation between the departments of state and defense first in the Balkans and later in Iraq demonstrates that such friction can be habitual within branches as well. The primary source of these tensions is the manner in which funding is allocated.

The National Security Council (NSC) is the first body in the federal hierarchy positioned to facilitate orchestration of whole-of-government capabilities. Although nowhere in the National Security Act of 1947 is the NSC given the authority to direct activity, it is the only place in government providing all key stakeholders participation during an undertaking. Yet the NSC lacks the capacity, financial leverage, and authority to overcome the frictions within the federal whole (though Executive Order 12333 provides latitude to review certain goings-on in national foreign intelligence, counterintelligence, and special activities). That the NSC has even less influence when it comes to multinational and broader inter-organizational contingencies is a given.

The first step (or the first bite of the elephant if you prefer) is to address this whole-of-government challenge. More effective whole-of-government functioning brought about by re-structuring is an initial—and necessary—condition. It may also be a sufficient one when addressing lesser national-security trials. Looking beyond intra-government challenges, history tells us that obstacles to multinational cooperation can be overcome, this despite the inevitable differences in national goals. Incorporating NGOs, IGOs, and for-profit entities will be a matter of coalitions’ organizational flexibility and willingness of each organization to recognize and cooperate to mutual benefit. These, however, are desirable rather than essential components of guaranteeing national security.

It is funding procedures—that primary source of inter-departmental friction—that unsurprisingly are also the primary obstacle to intra-governmental cooperation. One option meriting consideration: creation of management organizations independent of any department and answerable directly to the president or NSC. Managing the funding of endeavors would be the responsibility of such organizations rather than this function remaining dispersed and therefore a source of inter-departmental competition as is currently the case. Creating such operation, campaign, or other conflict-specific oversight organizations would have the additional benefit of providing a single node through which all matters related to the undertaking would pass, thereby abetting management both within and outside that organization. These bodies would hone their readiness for major challenges by handling smaller contingencies and conducting exercises. Conceivably, one or more such establishments would similarly oversee long-term challenges, orchestrating participating assets to U.S. advantage when disparate challenges such as those currently posed by China and Russia so demand.

Preparing those with essential skill sets would see cultivation of multi-departmental experience in government leaders. Inter-departmental assignments could be a condition for promotion, thereby mitigating the bureaucratic response of sending organizational chaff when tasked with providing personnel externally. Nick Warner is an exemplar in this regard. Recently selected to head Australia’s newly established Office of National Intelligence after having served two tours as director general of the Australian Secret Intelligence Service, Warner previously held positions at high levels in his country’s departments of defence and foreign affairs and trade, the former including secretary of defence, the latter both ambassador to Iran and 2006–2007 head of the Regional Assistance Mission to Solomon Islands.

Initial recognition of the need to reduce inter-organizational friction is evident in intelligence reforms the U.S. government enacted in the aftermath of the 9/11 attacks. Sober review of the event specifically cited “four kinds of failures: imagination, policy, capabilities, and management.” In many ways, the first failure was most critical as the U.S. inability to imagine such an attack ensured that the nation was ill-prepared in terms of the other three areas to handle a new form of crisis. As the commission stated, noting that hindsight always is 20/20, the “path of what happened is so brightly lit that it places everything else more deeply into shadow.”

The West faces significant threats to its nations. That posed by gray-zone activities waged by adversaries capable of arraying their whole-of-government capabilities against the individual or collective us is but one. We are not alone; others in defense, foreign policy, intelligence, and elsewhere in the government infrastructure have noticed the signs and have brought attention to them. Collective imagination would be far better served by greater cooperation between these and other components of government.

Action in light of this recognition is evident in the 2004 Intelligence Reform and Terrorism Prevention Act (IRTPA). This legislation addressed each of four failures noted in the report, significantly reorganizing the intelligence community, establishing the Director of National Intelligence position, and creating the National Counterterrorism Center while imposing measures to ensure civil rights and liberties were not diminished by efforts required to fight the terrorist threat. These efforts have in no small measure led to a better orchestrated, whole-of-government approach to dealing with the continuing terrorist threat.