Why the U.S.-India Relationship Is Headed for Big Things 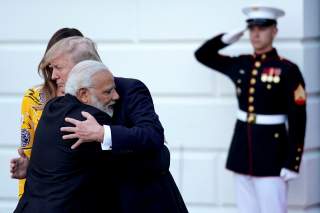 There was something both familiar and reassuring about Indian prime minister Narendra Modi’s recent visit to Washington.

It was familiar because it was reminiscent of his previous trips here as premier. And at a time when the world has seemingly been turned upside down by disorienting levels of change, anything familiar is reassuring.

Ever since Donald Trump took office five months ago, we’ve heard so much about how everything is so different in Washington and in the world on the whole.

And indeed, from the way he runs the White House to his views about his business interests, and from the way he interacts with foreign officials to his intention to lighten the U.S. footprint overseas, there is much that has changed.

The U.S.-India relationship has gotten caught up in this new zeitgeist, introducing new irritants into a relationship that had experienced an extended warming pattern in recent years. The Trump administration’s vow to rein in the H1B visa program, which allows high-skills workers to live in the United States, worries New Delhi and the powerful Indian information-technology firms that are the program’s main beneficiaries. Trump’s relative silence following the murder of several Indian-Americans earlier this year concerns Indians even more. New Delhi is also none too pleased about Trump’s false claim that India receives billions of dollars in aid from the developed world to participate in the Paris climate accord. More broadly, Trump’s hostility to climate change and clean energy has deprived the U.S.-India relationship of one of its newest and fastest-growing areas of cooperation. And his strident anti-trade position threatens to undercut bilateral economic ties at a time when India, after many years of resistance, is tightening its embrace of globalization.

And then Modi came to town.

From start to finish, the Indian premier’s stay in Washington was a case of, in the immortal words of Yogi Berra, “déjà vu all over again.” In the end, his visit telegraphed a fittingly familiar message: The U.S.-India relationship is going places, and fast.

On Saturday evening, when Modi’s plane landed at Andrews Air Force Base, and again when he reached his Washington hotel, an adoring gaggle of Indian-American supporters was, as always, waiting to greet him. On Sunday, he participated in two events that typically precede his meetings with official Washington. One was a roundtable with American CEOs. Privately, some of them may believe India’s investment climate still leaves much to be desired. Still, these corporate titans had good reason to be encouraged. New Delhi’s “Make in India” policy, which encourages foreign firms to set up shop in India, and the recent implementation of a new goods and services tax signify Modi’s strong intent to make India a more attractive investment destination.

The other familiar event was a speech to the Indian diaspora at a Ritz Carlton Hotel in northern Virginia. It wasn’t as raucous as Modi’s previous diaspora shindigs—he delivered a subdued speech in a hotel conference room, not a rollicking address to a sports arena blaring Bollywood tunes—but it sounded the same themes about the critical role played by Indian-Americans in the U.S.-India relationship.

Monday brought another familiar sight: droves of Indian journalists on the streets of Washington, most of them staking out positions along a small patch of real estate stretching from the Willard Intercontinental, where the premier was staying, to the White House a few blocks away. When Modi visits Washington, the Indian media come out in force. And they always ask why the American press corps don’t do the same.

After meetings with several members of Trump’s cabinet, Modi arrived at the White House in the late afternoon. Trump and Modi greeted each other with smiles and a handshake, and they appeared to swap a joke. In their very first moments together, their body language was positive and assured—signifying, perhaps, that in time they’ll develop the strong chemistry that characterized the Obama-Modi rapport. Later, after their private meeting, when Trump and Modi appeared together in the Rose Garden, Modi initiated two of the signature bear hugs that have spawned umpteen memes and GIFs. The first one was rather awkward, with Trump appearing unsure how to position himself, but the second one was decidedly more natural. These Trump-Modi hugs won’t be mistaken for the deep and confident embraces shared by Obama and Modi, but they did underscore the continued salience of personal relations in the U.S.-India partnership.

And yet Modi’s visit was as much about policy continuity as it was about the enduring appeal of personal relationships. The joint statement released after the Trump-Modi meeting reiterated the same themes that have animated U.S.-India relations for a number of years—shared values (such as democracy), shared interests (such as combating terrorism and promoting stability in the Indo-Pacific region) and, most strikingly, opportunities for economic cooperation. Even clean energy received a (brief) mention.

An implicit implication from the joint statement is that U.S.-India ties are invested with enough goodwill to overcome any new irritants that may have crept into the relationship in recent months.

Indeed, opportunities abound for the United States and India to keep working together, including in ways that uphold the “America First” principle and reflect Trump’s transactional approach to foreign relationships. These include counterterrorism, to help preempt threats to the U.S. homeland and to U.S. interests abroad, as well as arms deals, which are bound to intensify given Washington’s decision, in the waning days of the Obama administration, to grant India the status of major defense partner. For a security-focused, deal-oriented leader like Trump, arms sales should be a very easy sell. Cybersecurity—which both Trump and Modi have highlighted as domestic priorities—is another promising space for greater collaboration.

Modi’s visits to the United States are typically well-received affairs, and this one was no exception, with the premier wowing U.S. business leaders and Trump, who praised Modi for his country’s economic performance. In that regard, this trip—like those before it—highlighted how far Modi has come from his days as a pariah. Until 2014, when Modi became prime minister, the United States effectively banned him from visiting the country because of allegations that he failed to prevent deadly anti-Muslim riots in Gujarat, the state where he was chief minister, in 2002. There were, as always, a smattering of anti-Modi protests around Washington, with their causes ranging from Kashmir to independence for Indian Sikhs. But these were quite limited in number and scope.

So, as always, Modi came, saw and conquered. But what was different this time around was that he also reassured. In an era of tumult and unpredictability, Modi’s visit served as a reminder that the U.S.-India relationship—warts and all—still remains on relatively solid ground.

Michael Kugelman is deputy director for the Asia Program and senior associate for South Asia at the Woodrow Wilson International Center for Scholars in Washington, DC. He can be reached at [email protected] or on Twitter @michaelkugelman.