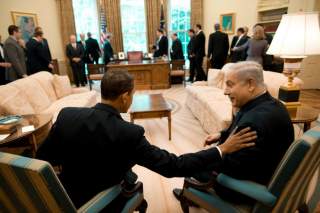 After months of tense and drawn-out negotiations, on September 14 the United States and Israel signed the largest U.S. military aid package given to any country, amounting to $3.8 billion annually. The new aid package reaffirms the United States’ unwavering commitment to the security of Israel. But the culmination of the aid deal, set to come into effect in 2018, also underscores the delicate and increasingly fractured relations between the United States and Israel during the Obama-Netanyahu era. While bilateral security cooperation between the two allies remains strong—and will likely remain so regardless of who is elected U.S. president in November—the last five years highlight a widening rift in U.S. and Israeli strategic objectives at a time of increasing turmoil and uncertainty in the Middle East.

With the effective conclusion of U.S.-Israeli negotiations for the military aid package, the next U.S. administration should take note of the need to restore trust with Israel and find ways to foster a more collective security mindset in the Middle East.

Despite record levels of U.S. military assistance to Israel under the Obama administration, the state of U.S.-Israel relations has worsened, not strengthened, in recent years. This strategic drift goes beyond the personal friction between President Barack Obama and Prime Minister Benjamin Netanyahu. At the core of this tension are fundamental differences in threat perceptions, strategic prioritization, and policy options for confronting unprecedented change in the Middle East. Whereas Washington has been frustrated by Israel’s settlement policy and the lack of progress in the Israeli-Palestinian peace process, Tel Aviv sees Iran and its destabilizing activities as its most immediate security threat—even more than the Islamic State of Iraq and the Levant (ISIL). The signing of the Iran nuclear agreement last year widened U.S.-Israeli strategic differences and contributed to a growing perception, shared by Tel Aviv and Gulf Arab capitals, that the United States is tolerating Iran’s antagonistic role in the region at the expense of its traditional allies. The perception of eroding U.S. credibility in the region—a view held by conservative and moderate members of the Israeli national security community, as well as by America’s staunchest allies in the Gulf region—has exacerbated these fears.

For Netanyahu and many Israeli officials, mistrust with the United States reached its low point when Obama surprised Netanyahu with a request for a settlement freeze in their first meeting at the White House in May 2009. A year later, Israeli officials felt betrayed again when the United States allowed for the “singling out of Israel” in the final document adopted by the 2010 Non-Proliferation Treaty (NPT) Review Conference, but which ignored Iran’s nuclear transgressions. The final document also called for convening a conference in 2012 on the establishment of a Middle East weapon of mass destruction-free zone in contradiction to alleged U.S. promises made to Israel. When, in 2013, Israel learned of the secret U.S.-Iran nuclear talks —reportedly six months after the talks began and before Obama briefed Netanyahu on them—the nuclear negotiations cemented Netanyahu’s view that Obama was bent on clinching a deal with Iran regardless of whether it ultimately served Israel’s national security interests.

Despite Netanyahu’s earlier opposition to the Iran nuclear deal, one year later numerous senior officials in the Israeli military and intelligence establishments have indicated their belief that implementation of the deal has so far reduced the immediate threat of an Iranian nuclear weapon for at least the next five to ten years. As Lt. Gen. Gadi Eisenkot, the chief of staff of the Israel Defense Forces, stated at a conference in Tel Aviv in January, “the [Iran] deal has actually removed the most serious danger to Israel’s existence for the foreseeable future … and greatly reduced the threat over the longer term.” Israel has thus refocused its attention from preventing Iran from acquiring nuclear weapons in the short-term to deterring Iran’s medium- and long-term nuclear ambitions, as well as protecting its northern and southern borders from Hezbollah and Hamas.

In contrast, the United States has recently focused on destroying ISIL and forging new alliances to achieve this objective. Overall, the Obama administration’s Middle East priorities have been to confront aggression against its allies, ensure the free flow of energy, dismantle terrorist networks, and prevent the acquisition or use of WMD by state and non-state actors. Toward this end, the Iran deal has succeeded in “rolling back Iran’s nuclear program,” preventing further conflict in region, and allowing Iran to eventually “rejoin the community of nations,” if it fully meets its international obligations. Yet despite these intentions and achievements, Israel does not feel more secure today and is seeking closer relations with Sunni Arab states that have not traditionally seen eye to eye with Israel.

Israel has discovered that its strategic interests are more aligned with those of the Sunni Arab world and Turkey than with the United States. This has paved the way for a remarkable transformation in the geopolitics of the region. Military and intelligence cooperation between Egypt and Israel today is unparalleled, including a revision to the peace agreement between the two countries to allow for more Egyptian troops into the Sinai to engage ISIL. In June, Turkey and Israel reconciled their six-year rift by normalizing diplomatic relations and ending a crisis that erupted following the 2010 Gaza strip flotilla raid. The two governments are soon expected to exchange ambassadors. Moreover, on several occasions, unofficial dialogues have taken place between Israeli officials and former Saudi officials, although the two countries still do not have formal diplomatic relations. In 2016, Netanyahu’s former national security advisor Yaakov Amidror and Saudi Prince Turki al-Faisal discussed regional security issues in a public event in Cambridge, Massachusetts, and Prince Turki shook hands with then Israeli Minister of Defense Moshe Yaalon during a conference in Germany. In an even rarer event, Dr. Anwar Eshki, a retired Saudi general, led a delegation of Saudi academics and businessmen to Israel in July to promote the Arab Peace Initiative and a two-state solution to the Israeli-Palestinian conflict.

Israel’s recent outreach to Gulf Arab states and Turkey is emblematic of their shared sense of abandonment by the United States and a common interest in developing new security relationships to compensate for what they all see as a U.S. desire for rapprochement with Iran and a reduction of America’s footprint in the region. According to many Israeli officials, this belief is reinforced by the U.S. “pivot” to Asia; reduced dependence on oil and natural gas from the region; a perceived lack of response to Iranian missile tests; and the seeming abandonment of other traditional regional allies, such as Egypt’s Hosni Mubarak during the Arab uprisings that began in 2010. Such views are echoed elsewhere in the region.

The U.S.-Israeli strategic drift may have been inevitable given the profound political transformation underway in the Middle East. Nevertheless, the changing geopolitical context and U.S. presidential transition present a unique opportunity to restore mutual trust, if managed carefully.

First, the new U.S. administration can take steps to revitalize the U.S.-Israel Strategic Dialogue—the highest-level regularly-scheduled diplomatic meetings between the two countries, which last took place in June after being delayed for two years. Such a dialogue would benefit from designating a career civil servant, rather than a political appointee, to lead the process on both sides and focus on the medium and long-term aspects of regional security. According to past senior officials who participated in the Strategic Dialogue, the meetings have become too symbolic and short on substance.

Second, the United States and Israel need to have serious discussions of an increasingly divergent strategic agenda and best approaches, which has proven difficult in official channels. The right way to do this would be to create an unofficial dialogue process to feed into the existing Strategic Dialogue framework. Although there is no deficit of communication between the two countries, U.S. and Israeli officials express the need for establishing a sustained quasi-official dialogue to insulate long-term strategic interests from domestic politics and to account for the diversity of views that exist in both countries across the political spectrum. As a starting point, the dialogue could focus on a narrower set of policy issues involving cooperation to counter terrorism and the proliferation of weapons of mass destruction—mutual security challenges where both sides can find common ground to address the drivers of instability in the Middle East as part of a broader regional security process.

Lastly, and most importantly, the Israeli-Palestinian issue remains a major bone of contention in U.S.-Israel relations. The new U.S. administration can leverage new geopolitical realities and alliances to encourage a regional security dialogue between Israel and Sunni Arab states under an inclusive security umbrella, including in the areas of economic cooperation, water, agriculture, and health. This framework could provide an opening for Palestinians to engage in peace negotiations with Israel. The Arab Peace Initiative could also be used as a basis for negotiations between the states of the region. The Initiative has never been a “take it or leave it” proposal and Israel should place greater emphasis on addressing it.

In an increasingly turbulent Middle East, the United States and Israel cannot afford to allow the foundations of their bilateral relationship to weaken. Both sides carry the responsibility to take proactive steps to restore trust at the highest political levels.

Chen Kane is director of the Middle East Nonproliferation Program at the James Martin Center for Nonproliferation Studies in Washington, DC. W. Seth Carus and Nima Gerami are, respectively, Distinguished Research Fellow and Research Fellow at the National Defense University’s Center for the Study of Weapons of Mass Destruction. The views expressed in this article are those of the authors and do not reflect the official policy or position of the National Defense University, the Defense Department, or the U.S. government.