Why the West Is Overlooking the True Russia Threat 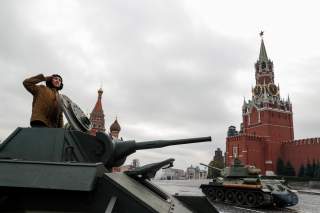 Fake news, information warfare and the weaponization of information have become everyday topics within the Western strategic discourse. According to the dominant Western view it is the cyber domain together with the all-penetrating social media that form the dangerous cocktail that makes democratic Western societies vulnerable to the predatory policies and actions of adversarial states. Although the weaponization of information has become a household word connected to many actors, Russia is at the epicenter of this phenomenon.

According to the dominant Western narrative, ever since the annexation of the Crimean Peninsula in 2014 Russia has been targeting Western societies and states with fake news and other manifestations of weaponized information. This is certainly true, but this Western take on Russia only scantly touches on the real problem in the defense domain. By defining the threat inadequately, many Western states are developing erroneous countermeasures to the challenge posed by Russia. Choosing to neglect the military aspects of the confrontation with Russia, it is possible to focus on the “easy” and “small” responses to the challenge that it poses. Expelling a few diplomats, talking tough at the UN, adding a few new names to the list of sanctioned oligarchs or improving strategic communications are ways to express outrage and resolve without actually doing much and without spending extra dollars or Euros.

Over-focusing on the information domain of the Russia-West confrontation means under-focusing on efforts aimed at bolstering military defense at the national and NATO levels. This problem is most acute in Europe, where traditional defense capability has withered away ever since the early 1990s. Rebuilding “real” defense capability in Europe would take more than a decade and cost hundreds of billions of extra Euros. Thus, it is politically easier to focus on the weaponization of information, aggressive troll farms, fake news and election meddling. Taking defense seriously would actually mean a long-term commitment of effort and resources.

The dominant Western take on the weaponization of information and fake news particularly has three analytical problems that actually hinder any attempts to prevent malign interference within Western societies and against the interests of Western states. First, the contemporary fake news narrative assigns Russia a dominant position within the competitive international arena, despite its many weaknesses in the political, economic, military and even in the information domain. Second, hyping fake news and election meddling overlooks some domestic problems within the Western states themselves that need to be addressed over the long run. Third, the Western “fake news” narrative over-accentuates the information domain in international relations. Even though information is—and has always been—an important factor and a “tool” for states and other actors, focusing on information leads easily to the under-accentuation on other domains—particularly the military domain.

First, analyzing statements by Western policymakers and public officials as well as media reports on Russian fake news, election meddling and a host of other similar topics, one could easily be fooled to assume that Russia is located at the peak of the global power structure. The sheer volume of “news” reports and warnings on Russia’s influence in Western societies is staggering. The Kremlin is portrayed as a monolithic hub of power, which has weaponized information and is now taking aim at the West.

It has become so commonplace to report on the prospects of Russian election meddling before any upcoming elections that we are actually approaching “crying wolf syndrome”: in order to be heard, one needs to shout louder. Election meddling hardly gets people to raise their eyebrows anymore as we have seen and heard about it so many times during the last four years: from the United States to France, Germany, Netherlands, Italy, the Czech Republic and Finland to point some examples. And election meddling is just theme within the broader category of information warfare and fake news.

The Western fake-news narrative empowers Russia. It assigns Russia with imagined abilities and agency that it does not deserve. And at the same time, the fake news narrative compels Western decisionmakers to respond in a way that actually amplifies Russia’s aura of power. By responding to the very vague threat of information warfare Western states are bolstering Russia’s powerbase and its possibilities to formulate the rules of the international power game. Russia has the initiative and the West is forced to react.

“Troll farms” and Russian paid ads in Facebook and Twitter have become hot topics within the West, as if it could be taken for granted that being exposed to untrue content in the social media makes people change their opinion on issues that are deep-rooted in their identity and many national narratives. In fact, narratives are not easily changed. Besides, narratives are collective social facts, which transcend any particular individual.

Most cultural constructs are “sticky” in nature very resistant to change even in the most conductive of circumstances. And after four years of Western “fake news frenzy,” it is questionable that there are too many people left that could be fooled with lies and untrue content in the social media unless some people actually want to believe these mostly esoteric messages that are posted online. The reason why some people would want to believe them would not be because they think that they are true, but because the messaging resonates with how they perceive the world.

This brings us to the second problem with the Western fake-news narrative: amplifying Russia’s power position by playing according to its rules of the game, Western states simultaneously bypass some of the problems that are located at their own domestic level. What is called political populism in Europe is expressed in a similar vein in the United States as a political rift between the Republicans and the Democrats. The polarization of Western domestic political sphere has been in the making for a longer time by now. It certainly did not start when Russia annexed the Crimean Peninsula 2014 and the relations between the West and Russia turned sour.

The fake news narrative is deceitful as it offers an easy solution to a complex and difficult problem. Many people will support anti-administration and anti-establishment views because they feel excluded from the society at large or from the way that the political stratum operates. During Donald Trump’s presidential campaign “lock her up” (Hillary Clinton), “rigged system” and “drain the swamp” messages were enthusiastically shared by many Americans. Similarly, in Europe many people support anti-Europe and anti-immigration policies not because of Russia’s information warfare and the fake news it posts, but because of a wider disjoint at national political level. Being against something mainstream has become a way to express one’s ideas and identity.

Normal healthy societies make sure that all or at least most people are “onboard” regardless of their economic situation or social class. This means providing a good-enough education, a decent level of social security and taking care of the weakest. Trying to address social fractures and political rifts with the tools of countering external information warfare or fake news gives a wrong sense of security: it fools decisionmakers and citizen into thinking that long-term domestic problems are caused purely by outside actors. In other words, it means externalizing some of the problems within the society to an external aggressor.

Best policy against fake news, election meddling and information warfare is to facilitate the creation of a healthy society where well-educated people have a sense of belonging. Citizens that have no need for anti-establishment sentiments or actions cannot be “spinned” into supporting policies that would undermine the security of the society or the state. For some Western states, achieving this would take some time, even if policy formulation and associated actions started immediately. But I argue that for the majority of Western states, the domestic conditions that would favor the use of fake news or information warfare are mostly absent.

Finally, the heavy focus on fake news and information warfare over-emphasizes the importance of the information domain. Information is important in politics at the domestic and international levels. But the post–2014 Western focus on Russian information and cyber power has overshadowed events on the ground. It is amazing that after the annexation of Crimea with the use of military force as well as the ongoing proxy-war in Eastern Ukraine and the military operation in Syria the vast majority of news on Russia focus on the information domain, cyber warfare, and the so-called hybrid threats. This is happening at a time when the large-scale use of military force has returned to Europe and world affairs more broadly.

During the last twenty-five years many European states have dismantled their military forces built for deterrence and defense during the Cold War era. At the same time, the United States has shed high-intensity warfighting “overweight” and shifted focus from great-power adversaries to counterinsurgency operations. Highlighting the need to rebuild real defense capability in Europe and to shift the defense planning focus within the United States does not equal advocating an aggressive force posture or militaristic policies. On the contrary, negotiating from a position of strength would actually lower the level of overall military threat, assure European states that they can actually contribute to the defense of Europe, and prepare Western states for the future, which looks more like it will consist of competitive great-power politics than positive-sum cooperation within a benign international-security order.