Why the World Can't Afford to Ignore the Rohingya Crisis 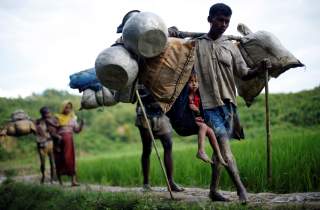 Myanmar’s Rohingya crisis continues to deteriorate since the Arakan Rohingya Salvation Army (ARSA) orchestrated thirty attacks on local police stations in the Rakhine State. Nearly three hundred thousand Rohingya have fled to neighboring Bangladesh for fear of violence targeted at Muslims. Myanmar has declared ARSA a terrorist organization, while Aung San Suu Kyi blames the “terrorists” for the misinformation about the true nature of the Rohingya crisis. It seems that most observers have focused on the domestic controversies of the Rohingya crisis, but the implication of the crisis on the regional security deserves more attention.

Bangladesh is the most affected by the Rohingya refugees. Although the Rohingya are identified as “Bengalis” in Myanmar, they have not been perceived or received favorably by the Bangladesh government. In the past, humanitarian relief and refugee status was denied to the majority of the Rohingya refugees. This time, the Bangladesh government has decided to provide temporary shelter for the refugees, but it still insists that the long-term solution requires the resettlement of the refugees back in Myanmar. Allegedly, the Rohingya discussion between the two governments has been thorny and unfruitful, with both countries pointing fingers at each other for the lack of sincerity and the unwillingness to take responsibility. The Rohingya issue will continue to strain the relationship between them.

Bangladesh seems keen on securing India’s support on the issue of Rohingya, but key disagreements exist. There is public discontent in Bangladesh with Indian prime minister Modi’s public support of Myanmar on the Rohingya issue. During his most recent visit to Myanmar in early September, Modi described India and Myanmar as “partners” in the crisis and condemned the terrorist attacks in northern Rakhine State. While India is more focused on the violence and security situation in Myanmar, Bangladesh is apparently more concerned with the influx of refugees and the strain those refugees have placed on Bangladesh’s national security and interests. By siding with Aung San Suu Kyi, Modi is perceived as ignoring the mounting humanitarian and security challenges to Bangladesh.

For all countries involved, there is a key question as for whether Pakistan—or at the minimum, certain entities and/or individuals in Pakistan—have provided support to ARSA’s operations in Myanmar. Indian and Bangladesh intelligence sources have cited intercepted calls between ARSA and Pakistanis, which they believe are key to the ARSA’s attacks against Myanmar security forces. If true, this would suggest that the radicalization of the Rohingya is not only a concrete threat, but also one that is assisted and supported by external forces. From the counterterrorism perspective, the spread of religious extremism and radicalism in Rakhine State is the bigger threat. It demands attention and a timely response by all countries involved.

Due to the Rohingya issue, Myanmar has had difficult relations with some Muslim countries and has accused them of supporting the Rohingya. Some of those countries have accused Myanmar of persecuting the Muslim population. The support from the Muslim countries to the Rohingya cause has been concrete. Most recently, the Turkish foreign minister called for a lasting solution to the plight of the Rohingya. Following his call, Turkey’s first lady visted a Rohingya refugee camp in Bangladesh and affirmed Turkey’s commitment to stand beside the Rohingya. The Saudi ambassador to Turkey has matched Turkey’s public demonstration of support by noting that the Kingdom has been standing by the side of the Rohingya Muslims for seventy years. He also called for an urgent relief campaign to be initiated by the Qatar Red Crescent Society in Bangladesh. Many Burmese find this type of support to be of insidious agendas, such as their contest for the leadership in the Muslim world by appearing to be the most supportive of the Rohingya. Even Aung San Suu Kyi has referred to the photos posted by Turkey’s deputy prime minister that purported to show dead Rohingya as “fake news photographs.” It is likely that diplomatic spats will ensue while Muslim countries support the Rohingya refugees and remain critical of the Myanmar government’s police.

Aung San Suu Kyi is skipping her scheduled speech at UN General Assembly this year, most likely to avoid Rohingya-related criticisms and attacks. What she will not be able to avoid are the ongoing challenges and questions by the international community over her policy on the Rohingya issue. It is well-known that the Rohingya crisis has deep domestic roots—in part because Myanmar has an Islamaphobic Buddhist population and a military operating beyond the civilian control. While people should focus on the root cause and on addressing the pressing humanitarian crisis, they should also understand that the Rohingya crisis is having profound impact on Myanmar’s foreign relations, regional politics and global counterterrorism campaign.

Yun Sun is a senior associate at the East Asia Program at the Stimson Center and a nonresident fellow at the Brookings Institution.