Why the World Is Giving Afghanistan Over $15 Billion 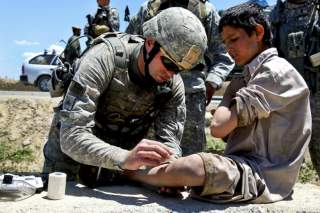 On October 5 in Brussels, seventy-five countries and over twenty international organizations agreed to continue support for the government of Afghanistan with $15.2 billion in development assistance over the next four years. This aid complements the promises of continued security assistance made earlier at the 2016 NATO Warsaw summit.

While the Taliban launched attacks in Kunduz and Helmand Provinces during the Brussels meeting, the Afghan government won donor support with commitments to reform, better governance, and improved performance. The World Bank’s most recent assessment makes clear that substantial assistance from partners will remain essential for Afghanistan through 2030, and in Brussels, donors promised to continue to provide significant but gradually declining aid on the premise that Afghanistan will become increasingly self-reliant.

Donors and partners are concerned about the Taliban’s threats to security. They also recognized the major tasks remaining to fight corruption, improve government efficiency, grow a strong private sector, create jobs for young people and to fight poverty, while strengthening security forces. But, the continued donor support for Afghanistan after almost fifteen years reflects a broad sense that Afghanistan remains a key front in a generational conflict against violent extremism, which is taking place in many countries today.

Despite the challenges, Afghanistan’s partners seem to accept that they cannot escape the conflict. In Brussels, many cited the need to find a way to peace. The communiqué welcomed the Afghan government’s willingness “to engage with all armed groups in a political process without preconditions.” But the communiqué also reiterated “we remain determined to counter all forms of terrorism and violent extremism as fundamental to international peace and stability.”

Many of us who have worked on these issues over the years conclude that the international community should not risk again leaving Afghanistan unsupported prematurely, as happened in the early 1990s. We paid dearly for that with 9/11 and the events that followed. Donor governments agree that Afghanistan should not again be a source of extremism and instability.

The government of Afghanistan is willing to partner politically and military, and the donors in Brussels accepted that it is committed to pressing ahead with reforms and improvements to governance across the board, as demonstrated by the range of serious actions, programs and plans discussed. Secretary of State Kerry argued in his Brussels remarks “year by year, our shared effort -- one of the largest international coalitions ever assembled and maintained over a sustained period of time – is, in fact, yielding encouraging dividends.”

A Complex and Difficult Mission

This has been a great diplomatic, development and military commitment and a complex mission. The results have been mixed. We have seen some amazing improvements in education, health, life expectancy, access to telecommunications and media, infrastructure, etc. Yet, efforts to achieve peace have not borne sufficient fruit. Relations under the former president of Afghanistan were difficult in recent years. The international coalition consistently faced a very challenging dual played role by Pakistan, which greatly hindered progress regarding the Taliban and related groups.

Since the drawdown of international troops, the Taliban and other extremist groups have had successes against Afghan government security forces. The local economy and social indicators suffered severely from the loss of foreign military and aid spending, and many headed to Europe. Corruption remains a serious problem. Division and paralysis in local politics slowed and burdened government effectiveness.

Given the growing security challenges posed by the Taliban and others, President Obama decided to freeze the U.S. troop drawdown and allow more active U.S. military support for the Afghan military. This has helped stabilize the security situation, but the Taliban attacks over the past week underscore the challenges.

The next president will need to consider the U.S. approach for the coming years. U.S. military and financial assistance, and that of our partners, is more modest than it was earlier. The several billion dollars a year from the international community should be sustainable and that aid remains critical for the Afghan government.

A number of former U.S. ambassadors, ISAF commanders, senior officials and scholars with Afghan experience have been working together to develop assessments of the situation and advice for the next President. In September, we recommended that the way forward should be an enduring partnership between Afghanistan and its international partners, based on mutual commitment over the next decade to build stability, better governance, and a stronger economy.

This longer-term engagement would be conditional. Afghans would do their part to strengthen security institutions and the effectiveness of military leadership and to improve governance, economic growth and social progress. In return, the United States and Afghanistan's other international partners would maintain the support needed by Afghanistan through security, development and related assistance. This support would be at a sustainable level, not an open ended amount. But it would be made available over a decade or more, if Afghan government performance and the situation merit it.

From a strategic perspective, this approach would seek to secure Afghanistan as a pillar in the global campaign against terrorism and violent extremism and as a needed contributor to stability in the broader region. Having a committed and capable government in Afghanistan would be worth the relatively modest levels of continued security and development assistance needed.

Mutual Commitments and the Brussels Conference

This notion of conditional engagement, or mutual accountability, is central to the October 5 outcome in Brussels. Donors agreed to provide significant but gradually declining financial support throughout the “Transformation Decade” (2015–24), if the Afghan government delivers on its commitments. The stronger working partnership would build Afghan responsibility, capacity and self-reliance while producing measurable results from the aid provided. The final communiqué in Brussels includes a thorough discussion of the areas of progress and challenges, and of plans and priority topics for work. It now needs to be converted into practical results in Afghanistan and presented in a clear, digestible way to skeptical publics.

The Afghans argued in Brussels that despite the evident setbacks suffered since 2014, they have held their own against the Taliban and are advancing on reforms and stabilizing the economy, since the massive withdrawal of NATO troops and related spending. They argued that they have “turned the corner,” having made the “basic system fixes” and that they are now ready to push ahead with better performance across the government.

Many non-Afghan participants agreed. As one senior European diplomat told me, “Given what many people thought of the prospects when the troop and spending drawdown began in 2014, the fact that we are having this conference at all and that we have continued commitments from so many donors is a miracle.”

Afghan officials urged donors gradually to provide more assistance through Afghan government channels and to allow the government more flexibility to move money around when projects are stalled or ministries can’t disperse funds. The donors agree in principle but seek increasing evidence of the government’s ability to use the aid well, to eliminate corruption, to improve delivery of services, and to fix internal bottlenecks before moving increased funds (now over 50 percent) through Afghan government channels.

The World Bank argues that Afghanistan will be heavily resource constrained and aid-dependent through 2030. The Bank says that increased aid, with more of it on budget, is needed to achieve a higher long-term growth trajectory. The Bank’s analysis no doubt supports the agreement in Brussels and makes clear why serious follow up in Kabul is vital.

The Bank argues for increased infrastructure investment to create jobs and to prepare for future growth. It proposes steps focused on development of the agriculture and mining sectors. The agricultural sector can increase food production and create jobs. Long-term investments in the mining sector will prepare the way for enhanced income over the longer term.

The World Bank identifies increased investment in human capital as vital. Afghanistan is living through a massive youth bulge. It needs to create new jobs each year and it needs those new workers to have skills needed to power economic growth. The World Bank makes clear that continued institutional strengthening, including improved collection of public finances, remains central.

The Bank also argues for programs aimed at meeting the needs of those at risk and living in poverty. Steps to prevent more migration and to absorb returning migrants from Europe and from neighboring Pakistan are key. European officials were eager in Brussels to get an agreement to allow the EU to send home Afghans not found to be qualified to stay in the EU.