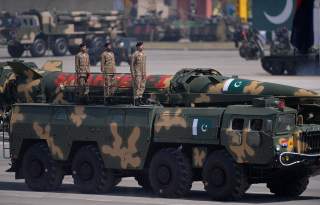 Nuclear dangers are growing in five different regions. The least noticed is South Asia. New Delhi has not been able to figure out how to deal with militant groups that enjoy safe havens in Pakistan. So far, India’s options have been to do nothing after attacks or execute war plans that invite mushroom clouds. A third option, which involves commando raids, may now be coming into view.

During seven decades of strained relations, Indian war planning has been downsized from fighting major conflicts to fighting limited conventional wars. Comparatively speaking, moving from limited conventional war to commando raids is a step in the right direction. But this progression offers little consolation when the potential for escalation is ever present, and when nuclear weapons serve as a backdrop to every military encounter.

India’s classic war plan against Pakistan centered on large-scale, time-consuming mobilizations along two main fighting corridors. This plan didn’t help India after the “Twin Peaks” crisis, sparked by a brazen attack on the Indian parliament in 2001. India carried out a massive mobilization, but Pakistan’s army deployed faster after a delayed start, which made the prospect of a full-scale conventional war under the shadow of nuclear weapons a poor choice for New Delhi.

War plans don’t go away; they evolve. India’s army then pivoted to plans for quick strikes and shallow advances along many possible avenues of attack. Rawalpindi countered by embracing nuclear weapons tailored for various kinds of battlefield use. The Indian Army’s so-called “Cold Start” doctrine remains on the books, even though implementation is problematic due to long-standing disconnects in civil-military relations, joint-military operations and military procurement. More importantly, a limited conventional war, no matter how carefully planned, may not stay limited. India’s civilian leaders have yet to endorse the army’s plans, and didn’t employ them after the 2008 Mumbai attacks.

Since then, Pakistan has been more victimized by acts of terror than India. But because the perpetrators are overwhelmingly homegrown—and since they have refrained from attacking Indian targets—their carnage does not prompt war scares on the subcontinent.

In contrast, attacks against Indian targets that originate in Pakistan have clear escalatory potential. They typically occur after New Delhi makes overtures to improve relations with Pakistan. Prime Minister Narendra Modi has made three such overtures. He invited Prime Minister Nawaz Sharif to attend his inauguration in May 2014, he agreed in July 2015 to resume a composite dialogue on all outstanding issues, and he made an unannounced visit to Lahore bearing birthday and wedding gifts for Nawaz Sharif and his family on Christmas Day 2015.

Attacks on Indian military camps or consulates in Afghanistan followed after each of these overtures. After the attack on the Indian military outpost at Uri last September, Modi dispensed with diplomacy and adopted a very hard line. The announcement of “surgical strikes” across the Kashmir divide followed, and were reinforced by pointed references to Pakistan’s jugular—stirring up greater disaffection in Baluchistan and revisiting the Indus Waters Treaty.

Relations between India and Pakistan are now stuck in a bad place and have poor prospects of improvement in the near term. Bilateral diplomacy is limping along, the Kashmir Valley is seething due to ham-fisted governance and a lockdown by Indian security forces, and artillery fire can again be heard across the Kashmir divide.

Rawalpindi’s military’s campaign against the Tehrik-i-Taliban Pakistan will probably never end. But now that it is winding down, Pakistan is being asked what the next step in counterterrorism operations might be. So far, there has been no answer. Taking aim at the Afghan Taliban leadership and the Haqqani network seems unlikely, because ceding influence in Kabul to India is not in the cards. Tackling anti-India and violence-prone sectarian groups also seems problematic because doing so would result in a more intrusive military presence and significant spikes of violence—especially in the Punjab. To turn against anti-India groups when Modi has adopted a hard line and when Kashmiris are deeply disaffected doesn’t seem likely. Consequently, much is now left to chance—particularly additional attacks on Indian military and diplomatic outposts.

Domestic politics and shrill social and television media militate against hesitant Indian reactions, even to low-level attacks by groups enjoying safe havens in Pakistan. Hotheads don’t care that attacks against Indian targets have hurt Pakistan’s regional and international standing; nor do they care whether or not India retaliates. New Delhi expects support—or at least silence—if it decides to strike back.

Meanwhile, Pakistan’s diplomacy is hamstrung. The talking point that Pakistan does not distinguish between “good” and “bad” terrorists is belied by facts on the ground. Calls for a resumption of dialogue and a focus on conflict resolution do not resonate because “bad” terrorists that enjoy safe havens stymie both. Until it takes very hard, demonstrable steps against these groups, Pakistan cannot expect a fair hearing about its legitimate grievances.

Michael Krepon is Co-founder of the Stimson Center. His latest edited volume is The Lure and Pitfalls of MIRVs: From the First to the Second Nuclear Age.