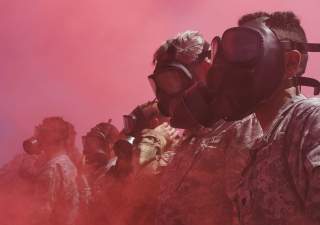 It’s time to face reality. When it comes to a nuclear-armed North Korea, the question is no longer “if” but “when.” Denuclearization, the goal underlying UN Security Council sanctions, has become a chimera. Though there’s much that we don’t know about North Korea, there are some things—at least four—we do know for certain. None of them provides any basis for believing that Pyongyang will forgo nuclear weapons because of external political and economic pressure.

The first is that North Korea’s leaders have been relentless in their pursuit of nuclear arms—perhaps as far back as the 1950s, and certainly since work, backed by Soviet technical assistance, began on the Yongbyon reactor in 1979. Severe economic constraints haven’t dimmed their determination. North Korea’s GDP (calculated using purchasing power parity), $40 billion in 2015, ranked about eighty-seventh in the world, just behind Tunisia, which has less than half of North Korea’s population. North Korea’s income per capita (a rough measure of living standards) that year was $1,700, placing it on par with South Sudan, or 213th in the world, near the very bottom. UNICEF reports that North Koreans suffer from “chronic food insecurity and limited access to quality health [sic] and water, sanitation and hygiene (WASH) services, which have resulted in poor health outcomes. An estimated eighteen million are food insecure and two hundred thousand children are affected by acute malnutrition.” Despite this privation, North Korea’s leaders have doggedly allocated money to their nuclear-weapons program, passing a milestone with the first detonation in 2006 and conducting five more thereafter (2009, 2013, two in 2016, and 2017), and a series of ballistic missiles besides. We have no reason to expect that North Korea’s behavior on this front will change.

The Trump administration hopes that sanctions and political isolation will work and that it’s a matter of ratcheting up both as never before. They’re in for a disappointment because the second thing we know about North Korea is that it has weathered a series of Security Council sanctions resolutions, doesn’t fear them, and cares not a whit about international opprobrium.

The most recent resolutions adopted (unanimously) on August 5 and September 11 really tightened the screws. Together, they ban imports of North Korea’s coal, lead, iron ore, textiles and seafood. They prohibit natural-gas sales to the country, cap annual crude-oil sales at the amount exported to North Korea in the twelve months preceding the September resolution, and limit the sale of refined petroleum products to two million barrels per year. The resolutions also forbid new or renewed work contracts and permits for North Koreans who work abroad and earn money ($500,000 annually, according to the U.S. government) for Pyongyang’s coffers through remittances. They mandate the closure of joint ventures and the restrict the initiation of new ones without UN approval. Additionally, they freeze the assets of three high-level North Korean civilian and military organizations. Preceding the resolutions were others that condemned North Korea’s 2003 withdrawal from the Nuclear Non-Proliferation Treaty and ballistic missile tests.

Yet there is not a scintilla of evidence that these penalties and censures have led Pyongyang to reconsider its decision to develop nuclear weapons and test ballistic missiles, let alone relinquish them. Could the latest resolutions change Pyongyang’s path? Possibly, but don’t bet big money that it will.

Kim Jong-un has remained unmoved and defiant in the face of sanctions. After the August sanctions resolution his foreign minister, Ri Yong-ho, lambasted the Council for acting illegally and abusing its authority and reminded its members that they had tested the very weapons that they were now punishing North Korea for testing. Pyongyang, he vowed, would “not flinch even an inch,” would continue testing nuclear weapons and ballistic missiles, and would never bargain them away. As for Washington, Ri warned that North Korea now had “intercontinental attack capabilities” and that “the entire U.S. mainland is in our firing range.” It’s a safe bet that future UN Security Council resolutions will elicit similarly truculent ripostes.

Would harsher economic punishment, such as a ban on oil exports to North Korea, change Kim’s mind? Unlikely, though we may never know because there’s virtually no chance that China, Pyongyang’s principal energy supplier by far (approximately 520 metric tonnes of crude oil per year plus another 270,000 metric tonnes of oil products), and Russia (forty thousand metric tonnes of crude oil annually, although sales appear to have increased since 2016), the next most important source, would implement an embargo, or sustain it for long if did. Neither of them would allow an oil shutoff to be included in the September 11 resolution despite intense U.S. lobbying and reports in the run-up to the vote that Beijing might relent. Vladimir Putin ruled out an oil embargo days in advance, insisting that the embargo wouldn’t change North Korean government’s behavior but would hurt North Korea’s longsuffering people. Putin has his own reasons for advancing this argument, but that doesn’t mean he’s wrong, especially because North Korea can cope with an oil-export ban using various workarounds: increased reliance on coal, reducing oil consumption, turning to biomass-based synthetic fuel and coal liquefaction, or all of these combined.

If Pyongyang continues testing nuclear weapons and ballistic missiles, then the United States could put economic pressure on China and Russia in hopes of getting them to agree to a ban on oil sales. Indeed, on September 3, Trump threatened, in a tweet, naturally, to end American trade with countries that buy from and sell to North Korea; but that was an empty—even absurd—threat. North Korea’s total trade in 2016 amounted to $6.5 billion and virtually all of it (93 percent) was with China; so Trump would have to stop American trade with the Chinese to squeeze the North Korean economy further. That’s easier said than done. American exports to China totaled $169.3 billion in 2016 and two-way trade $479 billion. Because China would surely retaliate, the U.S. economy would be hit hard, major American companies with big stakes in the Chinese market even harder.

Furthermore, a trade war between the world’s two largest economies would rattle global markets, causing stocks and bond yields to plunge and interest rates to soar. China and fourteen other countries account for pretty much all of North Korea’s trade (though China aside, the dollar value is small). They include Germany, Mexico, India, the Philippines, Russia and Saudi Arabia. Who would take seriously Trump’s threat to end trade with all of these countries? Kim is betting that no one will, and he’s right.

North Korea’s defiance and threats may seems crazy (Kim is often portrayed that way in the press) considering that even China and Russia have castigated its nuclear and ballistic missile tests and voted for sanctions in the UN Security Council. Well, crazy like the fox, perhaps. Kim Jong-un, though still in his early thirties, has sized up the strategic situation very well. On the one hand, it’s obvious to him—and anyone for that matter—that the United States and its allies wield far more economic and military power than he does or ever will. On the other hand, and this is the third thing we know for sure about Pyongyang, he understands the crucial difference between possessing power and converting it into desired outcomes and excels at turning his weaknesses into strengths.

Take sanctions for example. North Korea’s economy eventually would have been paralyzed were the West able to persuade China and Russia to really tighten the vice by cutting off energy supplies. They will never do that, though, because while the United States and Europe (though not South Korea) can afford to watch the implosion of the North Korean economy and remain unscathed, China and Russia cannot. China has a nearly nine-hundred-mile land border with North Korea (the earthquake-magnitude tremors from Pyongyang’s September 3, 2017, nuclear test reached various parts of China’s adjoining Jilin Province). Though the Russia-North Korean border is only eleven miles, Russia too will feel the reverberations of a North Korean economic collapse. Beijing and Moscow rightly believe that they will largely be on their own in managing the mess and pumping in the funds that will be needed to mitigate its consequences, which will likely include a flood of refugees. They have no reason to wish that future on themselves.

Kim understands that the magnitude of North Korea’s economic problems ensures that its two most important supporters will choke it to death for fear of triggering a crisis, which, because of geography, will inevitably touch them. And because China and Russia have veto power in the UN Security Council, Kim can count on them to block a resolution that would target North Korea’s economy with the equivalent of a wrecking ball.

Similarly, though North Korea is vastly inferior to the United States militarily, Kim has played his weak hand with considerably savvy, which is precisely what has driven Trump—and his predecessors in the White House for that matter—to distraction. Trump, like his forerunners, is learning that United States, the world’s most powerful country, cannot threaten or coerce Pyongyang into submission. Trump’s fulminations and the less colorful—but no less pointed—warnings of Trump administration officials have far from rattled Kim and routinely elicited apocalyptic rejoinders. For example, America’s UN ambassador Nikki Haley said that North Korea’s continued nuclear tests amounted to “begging for war.” Also, Defense Secretary James Mattis noted that the United States was not looking to annihilate “a small country, namely North Korea, but . . . we have many options to do so.”