Why There's Growing Distance Between Washington and Berlin 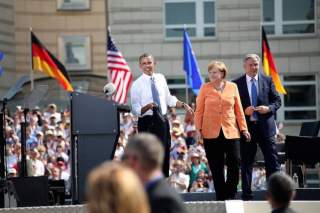 Stress has crept into the dialogue between the world's largest and fourth largest economies — the United States and Germany, respectively. That stress is generated by trade, tax and regulatory issues, but also by the U.S. presidential election. The possibility that Republican presidential candidate Donald Trump could win the November contest is generating deep concerns in Berlin. Even with a Hillary Clinton victory though, relations between Washington and Berlin are due for a reassessment as the glue of the Cold War has given way to a much less well-defined commonality of national interests. Recent tit for tat regulatory actions regarding Apple and Deutsche Bank (DB) indicate that the relationship has some major stress points.

The U.S.-German relationship is important, based on a longstanding working alliance (via NATO) and substantial trade and investment links. Germany is the fifth largest trade partner for the United States and the United States is Germany's largest trade partner. Most major German corporations operate in the United States, employ American workers and pay taxes, while the same is true of U.S. firms in Germany. Considering that Germany is Europe's largest economy and is the real power within the European Union, U.S. interests have usually been well served over the last decade by a close working relationship, which has been useful over such issues as Afghanistan, the war on terrorism and economic sanctions following Russia's annexation of Crimea.

Yet in recent years there has been a growing distance between Washington and Berlin. Revelations in 2013 that the National Security Agency had a large surveillance operation in Germany, including tapping Chancellor Angela Merkel's cell phone did damage to Berlin's trust vis-à-vis Washington. This dovetails with German worries about U.S. big data and social networking companies like Google and Facebook reshaping European digital standards and business. It also generates sentiment that Germany is losing control over key elements of its society and economy.

In March 2016, Germany's antitrust agency launched proceedings against Facebook, noting that it suspected its conditions of use were in breach of German rules on data protection. German officials also banned Facebook from collecting and storing the data of 35 million German users of its WhatsApp messaging service, after a ruling found the company had breached data protection laws by sharing customer information. That is not all. In October 2016, Germany's justice minister, Heiko Maas, announced that Facebook and Twitter risk being held criminally liable for failing to delete racist posts reported by users.

While the Obama administration sought to regain trust from the German side, strong differences have continued over such issues as the role of the state in the economy, involvement and commitment to international organizations, religiosity, and the use of force in international relations. One of the flashpoints for the German public was the Transatlantic Trade and Investment Partnership (TTIP), which has been protested in Germany as the Americans seeking to impose markets and globalization on Europe.

It should be remembered that the TTIP was initiated with Chancellor Merkel's support when she went to Washington in 2012. This is part of the challenge in U.S.-German relations at this juncture. Daniela Schwarzer observed in Foreign Policy in April 2016: "The TTIP debate highlights the contradictions at the heart of Germany's perspective on its relationship with America: Germans often feel a sense that the United States is trying to trick them into unfavorable deals and agreements or otherwise betray them. In 2015, the United States became Germany's most important export destination, overtaking France. Still, many Germans don't believe U.S.-made cars are safe, U.S. chicken is healthy, or that U.S. regulators are well-intentioned.”

Another flashpoint in U.S.-German relations has come from the decision by the European Union (EU) to demand that Ireland force U.S. tech giant Apple to pay €13 billion ($14.5 billion) in unpaid taxes. It is believed that there was a political motive behind hitting Apple — under pressure from populist eurosceptic political parties, the EU Competition Commission wanted to demonstrate that big U.S. corporations are not allowed to get away with tax avoidance. This move had the backing of both Berlin and Paris.

The action against Apple was followed shortly by a $14 billion fine leveled against Deutsche Bank, Germany's and Europe's largest bank, for misselling mortgage securities by the U.S. Department of Justice. While a number of large banks (mainly American) have been charged with fines by the Department of Justice, the amount shocked German authorities and raised cries of foul from Germany's political class that the American action was retaliation for the action against Apple. From the U.S. perspective, the EU demand that Apple pay the Irish government €13 billion in back taxes (which Ireland has stated that it does not want), smacks of European protectionism and a breach of contract law.

The DB issue quickly became a focal point for global investors as it is one of the world's largest counterparty actors, Europe's and Germany's largest bank, and a key financial partner to many of Germany's major corporations. It is also a major counterparty to the U.S. financial system and even a temporary disruption of DB's business due to the fine would likely have severe consequences for big U.S. banks like Citigroup and JP Morgan.

Although German authorities quickly asserted that they would neither bail out DB nor help in negotiating with the Americans, the bank is too big to fail. The political consequences of a bailout are high, but bank failure would be far worse, especially considering that 2017 is an election year.

Many Germans and Europeans regarded DB’s fine as retaliation. Peter Ramsauer, chairman of the German parliament's economics committee, stated to the German newspaper Welt am Sonntag that the action against DB "has the characteristics of an economic war."  Ramsauer also noted that the United States has "a long tradition" of using every available opportunity to conduct what equals a trade war "if it benefits its own economy."  He is hardly alone in articulating these sentiments.  Markus Ferber, a member of the European Parliament from the center-right Christian Democrats said that the timing and size of the DoJ's fine was a "tit for tat response" by the U.S. authorities to the EU's move against Apple.

The interplay between politics and economics is also evident in German interest in and perceptions of the U.S. elections. While most Germans are comfortable with Clinton and they have an understanding of her views (which are more status quo in terms of the transatlantic relationship and the alliance structure), there is real fear and loathing of Trump. Germany's Foreign Minister Frank-Walter Steinmeier, a member of the center-left Social Democrats, recently described the Republican contender as a "preacher of hate." That is mild compared to what the German press has called him.

German concerns revolve around Trump's economic plans and his stated intention to renegotiate NATO, which he has called "obsolete."  According to an internal German Economy Ministry memo obtained by Der Spiegel, a major German news magazine, a Trump administration would severely damage the U.S. economy, which would be bad for German exporters. The ministry indicated that "shrinking gross domestic product, fewer jobs and higher unemployment" would be the result of Trump's policies. The Economic Ministry's leaked document also noted that Trump's pledges of annual economic growth of 3.5%, tax cuts of $4.4 trillion, curbing regulation and redoing of trade deals are “not feasible.” Moreover, the plans would violate international or U.S. law and could be “no basis for a realistic economic policy.”

The Germans also have a major problem with the unpredictable nature of Trump. As Der Spiegel noted: "In Berlin government circles, officials are more concerned about Trump's character than the radical political about-face he might introduce." Low level talks have been initiated by the German government with the Trump campaign, but this appears to have done little to mitigate concerns in Berlin.

Trade and tax issues can be challenging by themselves, but when sharp-edged politics is added into the mix, the cordiality that makes relationships workable declines. This is the challenge facing U.S.-German relations. The retaliatory nature of Apple and DB reflect that relationships between Berlin and Washington needs to be reassessed with a view of how to maximize mutual national interests. This would likely be more difficult with a Trump presidency than a Clinton administration, a factor that clearly worries Berlin. It is important that the world’s largest and fourth largest economies and fellow democracies are able to maintain a cordial working relationship, considering the very challenging nature of international relations in the early twenty-first century. And for Americans, it is equally important to remember that so goes Berlin, so goes the rest of Europe.