Why Theresa May Should Allow Parliament to Vote on Brexit 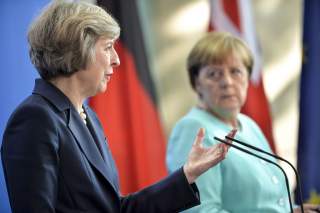 Were the UK ever wondering how much influence it wields on the world stage, now it knows: a great deal indeed. Despite intermittent runs on the pound and plunging business confidence, Prime Minister Theresa May has doubled down on her government’s commitment to go through with a so-called “hard” Brexit. However, she would be wise to allow her Parliament a vote, for losing the outsized role the UK plays globally would be one of the principal costs.

The UK is already counting the costs of the referendum in terms of currency and stock market instability, coupled with a sustained depression of business confidence. These are harbingers of a series of negative long-term effects. Upon actual departure foreign direct investment would dramatically dwindle; multinational companies would move their headquarters; and a brain drain would ensue. All of this would lead to less growth, higher unemployment, and reduced living standards.

The UK Treasury estimates that British GDP reduction within two years of Brexit would be twice as large compared to remaining in the EU’s single market. The combined cost of renewed tariff and a wide array of non-tariff barriers will be highly impactful. Moreover, the cost of losing the EU “passport” that allows unhindered access across Europe for the UK’s famed service-based industries—banking, insurance, consulting—will markedly amplify the costs of departure.

By subjecting the country to several austerity budgets, former Prime Minister Cameron already compounded these costs by another order of magnitude. As a result, it appears his Conservative Party successor is carving out a different direction. May’s government has embarked on a moderate policy path intended to aid the middle and working classes, an approach more redolent of Margaret Thatcher’s Tory predecessor former Prime Minister Edward Heath.

“One Nation” conservatism is back in Britain, as May appears to be deftly converging on the ideological space of the crisis-ridden Labour Party with policies more akin to former Prime Ministers Blair and Brown rather than Cameron and Thatcher. The irony herein is that the serious economic costs for fully leaving the EU would actually do real harm to the country, not to mention May’s legacy.

The major long-term loss for Britain, however, would be its reduced influence as a world leader. It has long punched above its weight globally speaking, remaining a fairly major world player long after Britain lost its empire, with the special relationship with the United States, a highly capable military, major financial leadership, and first-rate diplomatic skills. The UK has also been an EU leader, one of the top three along with France and Germany. Now England could be left alone, with Scotland leading the way by leaving the UK and rejoining the EU.

All but one of these is soon to falter, starting with the special relationship. President Obama had to say that the UK is still a great ally of the United States, partly because he has to try to dent the damage Brexit is expected to have on the United States. In reality, the UK would be less useful to the United States. Not only is the UK apparently on its way out of the EU, but its diminished economic condition would also force it to pair back what it spends on its military and intelligence capabilities. The UK could compensate for Brexit by doubling what it contributes to NATO, but it would be unable to afford to do so—e.g. its Ministry of Defense is set to lose $800 M in purchasing power from a hard Brexit.

Leaders of the “Leave” campaign have charged that the United States would never remain subservient to a foreign court or a supranational government above its own. The United States, it is true, in its current state would not go down such a road, for it is the world’s sole superpower. But, were it in Britain’s shoes at present it most certainly would—just as the UK wouldn’t if it were the world’s reigning colossus, keeping the shipping lanes open in the East and South China Seas and so forth.

“Leave” campaigners also claimed that Britain on its own would be able to negotiate a favorable trade deal directly with the United States. But Americans are in a foul mood these days, with workers buffeted by the downsides of globalization and temporarily more nationalist and less tolerant than they normally are. And as far as the EU is concerned, it will be forced to play hardball with the UK in order to signal to other EU members that leaving is prohibitive.

What is more, France has begun to look more reliable to U.S. leaders, for not only has Paris continued to take on global leadership—from its Mali military operation to Middle East peace efforts—but a prominent Frenchman recently reminded Washingtonians that France was America’s “original ally.” Thus, if May wants to avoid irreparable harm to the Special Relationship, she needs to use the opportunity the High Court has afforded her and allow the UK Parliament to help her climb down from this treacherous perch.

In fact, if the UK goes through with Brexit, the Special Relationship will be a major consequence irrespective of whether Hillary Clinton or Donald Trump wins the election. The United States simply needs reliable allies more than ever, and the UK will no longer be fundamentally up to the task.

If Britain proceeds to administer this massive self-inflicted wound, the West collectively will appear less reliable, less stable, with the demise of the big U.S.-EU trade deal being the first casualty. The appearance of a diminished Western hemisphere will negatively affect what Asians, Middle Easterners, and Africans think of the United States/UK/Europe. For example, this will embolden Russia and China, possibly even Iran.

The United States is also already being harmed economically. To begin with, stock markets around the world already experienced a round of collapsing indexes and wealth wipeouts, which included Wall Street and the U.S. market. Even if the indexes are back up, further Brexit volatility is in the offing. Already investors’ rush to hold the dollar will make U.S. exports less competitive, thereby negatively affecting GDP and American jobs.

With conventional deterrence in Europe eviscerated by Vladimir Putin’s annexation of part of sovereign Ukraine and propping up the barrel-bombing Assad regime in Syria, the United States needs the UK leading in the EU and keeping the sanctions regime fully in place against Russia. Inside the Beltway, U.S. leaders tend to view Britain as a useful counterweight to Germany, for they’re aware of how many German firms do business in Russia and the degree to which the continent remains dependent on Russian gas.

The United States also needs its most reliable ally to help it deal with an increasingly aggressive China—in particular the annexation of islands from Philippines and Vietnam but also, the suppression of democracy in Hong Kong. The UK has also been playing a leading role taking on the remnants of al-Qaeda and taking the fight to ISIS, not to mention the efforts of its troops and civilian experts in places like Afghanistan.

The signals coming from Prime Minister May have not been reassuring, beginning with the shocking appointment of Boris Johnson as Foreign Minister—the man who has already thoroughly insulted the current U.S. President and both parties’ presidential nominees, not to mention Turkey’s President. And by putting two additional pro Brexit politicians in charge of other related portfolios, the overall signal sent is that the UK intends to be resigned to becoming a diminished global leader.

Now that the UK appears to be packing up and politically retreating back across the Channel, the admiration Americans hold for Britain will also falter as the openness and tolerance of our British cousins will increasingly be called into question. The UK is rapidly becoming less recognizable, and a whole lot more bewildering. After all, it was Winston Churchill who first called for a united states of Europe.

When I worked for the man who led Britain into what became the EU—the most successful political experiment in world history—I soon came to respect Sir Edward for his repeated refusals to “retire” to the House of Lords. I was there when he got to sit in the Speaker’s chair as he became the Father of the House. The man quite simply wanted to keep on fighting for his country, in the arena in which he had the most influence—not unlike that same country’s soon to be altered position at this present historical juncture.

Dr. Jeffrey A. Stacey is Managing Partner of Geopolicity USA. He is a former State Department official in the Obama Administration, author of “Integrating Europe” by Oxford University Press, and former Research Assistant and Speechwriter for the Rt. Hon. Sir Edward Heath KG MBE. He ghost wrote the three chapters of Sir Edward’s memoirs that describe his experiences negotiating for the UK to gain entrance to what became the EU, including taking the UK in as Prime Minister, and is a contributing author of the new biography “Edward Heath: A Singular Life” by Elliott and Thompson.