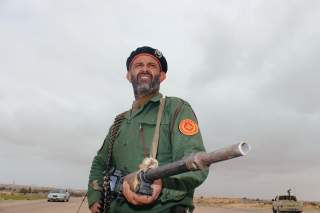 The Trump administration, faced with a dangerous world, has so far at least managed to keep America out of any new wars nearly three years into its watch. But short of ending the ISIS caliphate in Iraq and Syria by sustaining and intensifying the military strategy inherited from the Obama administration, it has not found a major foreign-policy success yet, either. New, and potentially hopeful, tacks in North Korea and Iran policy have not translated into major achievements yet. For political critics and allies of the president, this cannot be good news for the country. We could use a win.

A surprising place to find such a win may be with the United States’ Libya policy. To be sure, some luck will be needed; at the moment, a major breakthrough on peace is not imminent. But the Trump administration, with a few clever diplomatic moves and some willingness to supply modest additional resources at the right moment, could significantly improve the odds of success.

To review in a nutshell, the basic situation is roughly this: Libya has floundered since the overthrow of Muammar el-Qaddafi in 2011 and continues to struggle now. There are elements of a functional economy and governance, but otherwise only a hodgepodge of very weak central institutions and improvised local arrangements, as militias and other actors compete for the spoils of the state. As a result, Libya remains in disarray, representing a potential source of terrorism. It also continues to be a source of unregulated flows of people to Europe, originating from within its own borders as well as neighboring African nations. U.S. inaction opens the door for increased Russian and Chinese influence, contrary to American objectives.

Since this spring, the chaotic militia battles within Libya have temporarily coalesced into a more classic fight between two main camps: the eastern-based and misleadingly named Libyan National Army under the command of Gen. Khalifa Hiftar and the hodgepodge coalition of most other militias that are for the moment supporting the weak Government of National Accord, also a misnomer. At present the fight centers on the capital of Tripoli in the western part of the country. Hiftar’s spring offensive gained strength by taking advantage of the disaffection of many in the south with their meager share of oil revenues being provided by the GNA (as explained by Fred Wehrey of the Carnegie Endowment, and author of The Burning Shores, at a recent Brookings event). But his offensive unified the western militias against him, as noted, and military stalemate has been the result. Hiftar's efforts to portray all his opponents as Islamist extremists may have partially persuaded President Donald Trump, who gave him support back in the spring. But most Libyans and most Europeans know better, as does the impressive UN diplomatic mission on the ground there. Outside support to militias have come also from Egypt, Saudi Arabia, the UAE, and Russia as proxy conflicts continue unabated while violations of the UN arms embargo occur regularly.

How could this troubling situation possibly translate into an opportunity? Here is the logic:

* Washington and other capitals could pressure Hiftar to pull back forces from Tripoli and make clear what is obvious on the ground: this conflict will not be won on the battlefield. Essential to de-escalation is making enforcement of the UN arms embargo a meaningful policy, as former Under Secretary General for Political Affairs at the UN Jeffrey Feltman has argued. Saudi Arabia and other supporters of Hiftar could improve their international reputations with such a genuine effort at peace.

* While the hard work of negotiations occurs, U.S. policy should focus on the needs of municipalities. We called the approach “empowered decentralization” in a report from a Brookings-led task force on Libya from last spring. This approach recognizes that the most effective political unit currently is Libya’s cities, more so than the national government or three main historical regions. Among other things it would ensure a fair distribution of oil revenues and aid flows to major municipalities in Libya provided they used those funds effectively and transparently.

* Criteria would be established for how local entities could qualify for their fair-share allotment of oil revenues, international aid, and possibly military training. An oversight board comprised of Libyan technocrats and foreign experts would assess eligibility based on the actual behavior of the local actors. Libyan militias and political actors do sometimes have tribal proclivities, but they generally lack the kind of toxic ideological or sectarian motivations that worsen cycles of violence in much of the region. They are driven more by competition for their share of the state’s wealth and control over the neighborhoods and cities that matter to them. Perhaps better incentives can prompt them to improve their behavior.

* The prospects of success for such a strategy would be very significantly enhanced by the authorization and deployment of a UN-sanctioned security or verification force, assuming a request for such a force had been issued by key Libyan actors. Given Libyan national pride and patriotism, that force should have a narrow mandate that is focused on the protection of specific assets, institutions, locations, and monitoring of the agreed pullback of forces and ceasefire accord.

Today, there is a chicken-and-egg problem in Libya policy. Because the situation seems so hopeless, and top officials have other priorities, little thought is being given to how the crisis of 2019 might be turned into an opportunity. Nothing is guaranteed, of course, and ultimately Libyans will have to be willing to take the brave steps necessary for such a strategy to have a chance. But the United States is actually well positioned to attempt to spearhead a fresh try at peace, eight years after the overthrow of Qaddafi and the failure of the Arab Spring. And. Trump’s willingness to take on difficult challenges with unconventional approaches may just be the kind of thing that could give this idea a chance.