Why Trump Beat the Republican Establishment 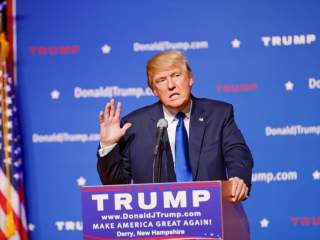 The events of the past week have demonstrated that there is probably nothing Donald Trump might do to mollify those in the conservative establishment opposed to him. After winning decisively in Indiana, Trump praised his rivals Ted Cruz and Marco Rubio—respectively the most conservative and most establishment-favored among his opponents, while looking forward to a “united” party. In response, he received nothing but disdain from the GOP establishment: a patronizing statement from speaker Paul Ryan, expressing “hope” that Trump will somehow morph into an acceptable GOP nominee. Jeb Bush and Lindsey Graham reneged on pledges they had made with much solemnity last summer to support the eventual GOP nominee, a pledge whose origins lay in the party’s worry that Trump as an outsider might launch a third-party bid. In the background, neoconservative figure Bill Kristol was tweeting about his own efforts to organize an anti-Trump third party. Other neoconservative writers had been penning gushing references about Hillary’s acceptability to foreign-policy hawks for months. At times it seemed as if virtually the entire GOP intellectual apparat, its editors and featured newspaper columnists and think-tank staffers were falling over themselves to denounce the man who had won millions of Republican primary votes from New Hampshire to Arizona to every red and blue state in between.

It’s simple enough to point to Trump’s weaknesses as a campaigner or to his political inexperience in explaining this rejection. These are obvious and have been repeated well past extraordinary redundancy for months now, though the most used damning phrases (misogynist, Mexican rapists, ban Muslims) are always stripped of whatever qualifications Trump supplied. They have been aired repeatedly in the anti-Trump attack ads that have saturated primary states since mid March. But Trump’s failings as a campaigner—undisciplined tweeting, bombast, changes of positions, disdain for the conventional wisdom (which at least sometimes is conventional because it is sound) don’t account for the depth of the hostility. That’s because Trump’s victories are not due his personal qualities (which are seldom overrated by his supporters) so much as to the extraordinary weakness of what establishment conservatism has stood for and promises. For some tens of millions of American voters, it matters less that Trump is clearly not well versed in policy nuances than that he has somehow identified and targeted the weakest points of establishment conservatism.

For what has the establishment GOP accomplished for its voters—excepting those in its well-nurtured class of consultants and lobbyists? In early 2015, the veteran pollster and Democratic consultant Pat Caddell analyzed a poll of Republican and independent voters, and was shocked by the widespread of animosity respondents expressed towards their own leaders. “The GOP leadership, the lawyers, the lobbyists, the consultant class of the Republican party don’t understand that these people are angry” Caddell said, continuing “I’ve never seen anything like this at the base of a party. And that is why the analogy to the Whigs is not so far-fetched.” This was six months before Trump walked down the escalator at Trump Tower.

He wasn’t talking about social-issue anger, which has been around for two generations and may be ebbing, but the emotions of people slowly losing their standing in their country. And what can the contemporary Republican Party point to? The war in Iraq, its relentless cheerleading for a war in Iran; lower taxes for the very rich; for its most establishment leaders, legalization of illegal immigrants. These all are proposed against a backdrop of accelerating economic inequality, and the shocking demographic decline—early death through hopelessness one might call it—of less-educated white people. The latter are probably not Trump voters, who more or less match the Republican average in income. But you can’t go to a Trump rally and sense that Trump voters are not so far removed from those people who have given up, and likely feel a sense of shared destiny with them more than does the typical Obama, Hillary or Romney voter. Trump, many conservative intellectuals claim, is not a conservative; but the natural retort to them is what precisely, with their agenda of foreign wars, middle- and working-class job loss, and high rates of immigration, are they trying to conserve?

In Trump’s case, the answer probably is something like an Eisenhower conservatism, with big government and secure employment. Trump was a boy in New York when Ike was carrying the state by twenty-two points.

Trumpism is also, as some have noted but the mainstream press has ignored, an American variation of a pan-Western phenomenon. A closely contended referendum about Britain’s withdrawal from the European Union awaits; Marine Le Pen (after purging her father and moderating her party) is the leading politician in France (though the National Front is smaller than the combined center-left and establishment right), and even Germany—deeply and for good reason suspicious of any antiestablishment conservatism, has produced its own “nationalist” conservative party. Ditto Sweden, The Netherlands, Austria, anywhere you look. Due to geography more than any other factor, Europe’s immigration crisis is more severe than America’s, but its newly ascending conservative parties are interested in approximately the same thing—a desire to conserve the best elements about the society of their parents and own youth, including such attributes as a secure and self-confident working class and a considerable sense of common and shared culture. One can denounce such aspirations as bigotry and xenophobia all one wants, but their durability suggests that they are universal, natural and deeply rooted in the human personality.

In the United States, the question of the day is to what degree will the Republican Party go to accommodate and support these aspirations, of which Donald Trump has improbably become leading vector. It is clear that the answer for the some of the GOP intellectuals, the hardcore neocons and most of the people at National Review, the answer is no, not one bit, not ever. These publications have developed an almost religious devotion to hawkish foreign policies, and a comparable affection for free trade. Their feelings about immigration may be ambivalent, but like most of the American upper class they are immunized from the worse effects. Their vision of America as an indispensable nation is one which requires America’s meddling in every corner of the globe.

The reactions of politicians are harder to predict, probably because understanding and in some sense accommodating themselves to popular sentiment is part of their job description. For instance, Lindsey Graham and Jeb Bush, both humiliated by Trump in the primaries, fall clearly into the camp that will try everything possible to destroy his candidacy. John McCain—ideologically more or less identical on the same wavelength as Graham, hawkish and pro-immigration, now seeks to keep his options open. Did reports of Trump voters waiting hours in Saturday traffic jams on the Arizona highways –while protesters blocked roads in efforts to inflict mayhem on those seeking to attend Trump rallies, strike some chord within him? Did the fact that Trump pulled 47 percent in Arizona, nearly doubling Ted Cruz’s second-place score, temper his impulse to be disdainful?

In any case, whether it wins, loses, or something in between, what Trump represents will now continue to find a political outlet. Trump was underestimated by the establishment press, because “populism” always loses. A different sort of politician, not able to self-fund through the primaries, less self-confident, less, if you will, bombastic, could never have broken through informal establishment cordon which separates serious candidates from fringe ones.

But Trump did break through, and the GOP won’t be same any time soon. It wasn’t the same after Barry Goldwater, even if the Arizona Republican (a completely different type of ideological figure than Trump) went down to inglorious defeat, shunned by establishment figures of his own party. Trump, whose victory reflects deeper historical forces than Goldwater’s did, will make a greater impact.

Scott McConnell is Founding Editor of The American Conservative and author of Ex-Neocon: Dispatches from the Post-9/11 Ideological Wars.