Why Trump Can't Afford to Ditch the Nuclear Deal 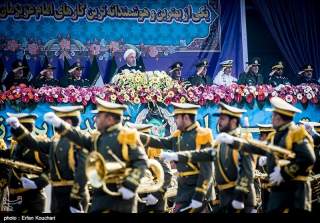 President Donald Trump’s imminent decision on whether to stay in the nuclear deal will affect more than nuclear nonproliferation in the Middle East. Trump has remained obstinate about his intention to destroy the deal absent a new agreement, despite that the prospects for renegotiating a better deal are slim, while the consequences for its failure are steep.

The Middle East has reached a crisis point over Syria, which has endured seven years of war. Increasing Israeli airstrikes on Iranian targets in the country have brought Israel and Iran into an escalation spiral where miscalculation could lead to an undesired conflict. Until now, Iran has restrained itself because Tehran is wary of taking actions that could prompt Trump to withdraw from the nuclear deal and undermine its economic recovery. Given the domestic pressures afflicting the regime, Tehran may feel less restricted politically if the deal falls apart and could lash out against Israel, its ideological foe, to deflect attention from its domestic troubles. The nuclear deal may be one important barrier preventing escalation and war in the Middle East.

As French president Emmanuel Macron recently discovered, absent a new deal, Trump will withdraw. Yet a new comprehensive deal is not possible. Europe was united in its support for the current deal until Macron offered support for a new deal, but French backing alone is not enough to get the other signatories (Britain, Germany, China, Russia, and the EU) to play ball. This calculus omits Iran itself, which has consistently rejected calls for renegotiation and linking the deal to other issues.

The proposed terms for renegotiation are audacious and fanciful. According to Macron, a new deal would address four pillars: the Iranian nuclear program, “sunset clauses” in the current deal, regional activity in Syria and Yemen, and ballistic missiles. It is worth remembering that the Obama administration intentionally delinked the nuclear issue from these other areas of tension to make negotiations more likely to succeed, and there is little indication that diplomacy will be more conducive this time around.

Then there is also the matter of concessions. It is difficult to imagine what the United States would willingly give Iran when hawks dominate Washington’s decision making apparatus. Regardless, the price would be extremely steep to have Iran agree to an indefinite agreement or to relinquish its right to enrich uranium, a matter of Iranian national pride which has long been targeted by the deal’s critics. Offering earnest, and not just ostensible, efforts to support Iran’s economic recovery—which Iranians expected to receive from the 2015 nuclear deal—are dead on arrival.

Then we get to the truly complicated issues. How can the United States realistically resolve Iran’s so-called “malign activity,” which is ill-defined and covers legitimate behaviors such as supporting an ally who is also the internationally recognized government in Syria? Bashar al-Assad is barbarous, but the United States is perturbed more by his politics than his morals. Further, Washington has ceded the moral high ground by supporting its own autocrats, including facilitating Saudi Arabia’s campaign on Yemen which has spawned a humanitarian catastrophe. The truth is that the United States cannot offer Iran anything that will convince it to abandon Assad; Tehran sees Assad’s survival as existential to its security and foreign policy.

Then there is the issue of permanently halting Iran’s ballistic-missile program, which Tehran has argued is purely defensive. Given Iran’s experience being bombarded by Iraqi missiles in the late 1980s and its need to deter conventionally superior rivals like the Arab Gulf states, Israel, and the United States, this is not a totally unreasonable rationalization. Yet the dual-use nature of ballistic missiles means any test is rightfully seen in Washington as a step towards a deliverable nuclear weapon that can hit the American homeland. Of course, this problem will only worsen if the nuclear deal collapses and Iran resumes unrestricted uranium enrichment, as ballistic missiles are far less dangerous when they lack a nuclear warhead.

Israeli prime minister Benjamin Netanyahu may have wanted his latest revelations about Iran’s prior clandestine efforts to develop nuclear weapons to delegitimize the nuclear agreement, but this information is not new. Although the Trump administration has exploited this disclosure in an attempt to undercut the agreement’s foundations, it was already well known that Iran had sought to develop nuclear arms prior to 2003, and that it is an untrustworthy negotiator. Indeed, this is why President Obama and others insisted that the 2015 nuclear deal not rely on trust, but verification.

It is farfetched to expect Iran to destroy all of its information on developing nuclear weapons. For even if Tehran decided to forgo a weapons capability after the international community united against it, states do not make proliferation decisions in a vacuum, but in response to external events. This should not be necessarily viewed as a sign of intent to proliferate, as other states, including American allies Japan and Germany, have followed similar paths. Instead, this should be seen as an opportunity to convince Iran that developing nuclear weapons will undermine its security, rather than as an impetus for increasing the pressure on Tehran, which will only persuade it that it needs nuclear weapons to prevent foreign intervention.

The U.S. priority must continue to be preventing Iran from obtaining a nuclear weapon, rather than going for an all-or-nothing approach that tries to solve every outstanding issue simultaneously. The 2015 nuclear deal remains an effective mechanism for this purpose. While America’s European allies and the deal’s other guarantors support the deal as a means to avoid war with Iran, only America’s Middle Eastern allies desire a U.S. withdrawal.

This should tell President Trump everything that he needs to know. Israel and Saudi Arabia are understandably incensed by Iran’s actions in the region, but their efforts to have the United States leave the deal and to enlist Washington in their struggle for regional primacy against Iran are insidious. While Washington should support its allies against hostile Iranian behavior, fighting Iran for Middle Eastern supremacy does not serve the U.S. national interest.

Instead, Washington should work to reduce regional tensions by supporting political settlements from Syria to Yemen, and it should recognize that abrogating the deal will diminish America’s credibility, isolate it diplomatically, and engender a rise in regional tensions. This does not serve President Trump’s desire to extract the United States from regional conflicts or put America first. The United States must stay in the nuclear deal.

Adam Lammon is the Program Assistant at the Center for the National Interest.