Why Trump Can't Go To 'War' Against the Coronavirus 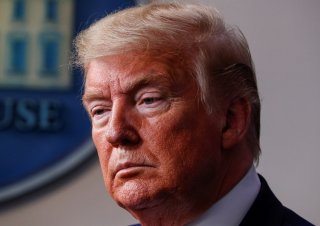 Commentary on the coronavirus pandemic is replete with warlike imagery. “This is a war,” declare New York doctors. “Trump is a war president now,” proclaim two writers at Politico. And the president seems to agree. France is “at war” with infection. Xi Jinping exhorts Chinese to wage “people’s war” against the coronavirus. Etc. Is the world really at war?

No. We have not gone a-soldiering in any strict sense. The war metaphor is helpful in some ways yet obscures the nature of the coronavirus challenge and proper remedies for it in others. It also gratifies the ambitions of those who crave political power. We should exercise caution before accepting the conceit that fighting disease is war.

So let’s clarify the lingo. The masters of strategy define war as an act of force to compel a balky human antagonist to do your bidding. The definition can stretch to encompass peacetime deterrence and coercion, but the idea that one opponent might use military force against another to settle a quarrel must be present for a phenomenon to count as war. A pandemic is not a human foe. It does not plot strategy and has no ingenuity. It is incapable of malice or fear. The battle against disease lacks the element of interaction between thinking opponents trying to impose their will on one another.

Think about it. Fighting forces cannot deter disease, or coerce it to do their will, or crush it on the battlefield. Nor can statesmen strike an agreeable compromise peace with it. It is a bane any sane government wants to physically exterminate. Military force is of scant use except at the margins. The U.S. armed forces have bountiful manpower, they can deploy hospital ships, and they can ferry supplies and people around with the best of them. But standard combat implements like artillery, stealth fighters, or cruise missiles avail nothing. There’s no pounding a microorganism into submission.

Xi Jinping’s depiction of the fight against pestilence as a people’s war is particularly inept. People’s war is a Maoist concept. Founding Chinese Communist Party chairman Mao Zedong fashioned it to guide a weaker Red Army and its civilian allies to victory against a far stronger enemy, whether it was the Chinese Nationalists or Imperial Japan. People’s war is an intensely human-centric enterprise. In fact, Mao insisted that human beings—not weapons or other material things—constitute the decisive element in warfare. For him, to oversimplify a trifle, people’s war involved luring enemies deep into the Chinese backcountry and waging an insurgency on a continental scale. Microorganisms have invaded homelands across the globe—but insurgency and counterinsurgency warfare is a fight for political legitimacy in the eyes of the populace. How do you stage an insurgency against disease?

The war metaphor just doesn’t fit the pandemic. But the simile—describing the campaign against coronavirus like a war in some respects—commands some value. There are certain similarities between war and public health. First, there’s the scale of the endeavor. There is no thinking, rational enemy to confront, but the virus poses dangers of magnitude comparable to armed conflict. Second, popular support is all-important. A society needs impassioned citizens to wage war or carry out any massive national undertaking. Statesmen harness and channel popular fervor to muster resources and institute strategies that could prove burdensome on the populace.

And people respond to martial imagery. That’s why Americans have waged wars on poverty, racial inequality, energy shortages, and on and on. Those weren’t wars in any literal sense, but they bore a partial resemblance to wars in that the stakes were high and popular support was essential to ameliorate some socioeconomic scourge. Invoking war works.

The practice of conflating peacetime policy with warfare seems to descend from a speech the philosopher William James delivered at Stanford University in 1906, titled “The Moral Equivalent of War.” Admittedly, it’s unclear how direct the lineage is between his words and those who deploy the war metaphor today. It’s likewise unclear whether those who invoke the war metaphor know its origins. Even so, James’s words are worth reviewing. In effect, he argued for redirecting the passions and resources that go into making war into national service aimed at reforming society. He wanted to wage war on socioeconomic problems. For him, such causes were the moral equivalent of war.

A staunch pacifist, James saluted humanity’s moral progress since ancient times, when war, plunder, and rapine were accepted facts of life if not praiseworthy. He cites the Melian Dialogue, a parley between emissaries from the city-states of Athens and Melos during the Peloponnesian War. The Athenians demand that Melos join their empire, and threaten extreme measures if city fathers refuse. The Melians do refuse, and the Athenians carry out their threat. They slaughter the men, enslave the women and children, and plant an Athenian colony on the island. The Melian Dialogue leaves us with one of the most amoral statements about international politics ever uttered: the strong do as they will while the weak suffer what they must. Raw power, that is, represents the arbiter of controversies among peoples.

Few in fin de siècle America or Europe maintained that brute power politics was a positive good. In recent years, contended James, President William McKinley had let popular indignation over Spanish misconduct in Cuba sweep him and the republic into war with Spain. The United States had seized the Spanish island empire and embroiled itself in counterinsurgent combat in the Philippine Islands. The splendid little war touched off a bitter debate between imperialists and anti-imperialists. This was all lamentable, but it was still a far cry from the bare-knuckles warfare endemic in classical antiquity.

Melian sentiments, in other words, had fallen into disrepute by 1906. And yet the philosopher maintained that the warrior spirit had endured into the modern age unabated. James seemed ambivalent about this primal force. He regarded it as a source of great strength—but only if channeled into pursuits not involving warmaking. He saw a need for big national endeavors. Industrial society had manifold economic and social ills to contend with, while youth needed an outlet for their martial energies. Why not put youthful power to work mending America’s socioeconomic fabric?

But James espoused more than an ethic of national service; he wanted government programs to put youth to work. Rather than conscript military-age manpower for the armed services, the United States should conscript youngsters for civilian service: “to coal and iron mines, to freight trains, to fishing fleets in December, to dishwashing, clothes washing, and window washing, to road-building and tunnel-making, to foundries and stoke-holes, and to the frames of skyscrapers, would our gilded youths be drafted off, according to their choice.”

Not only would draftees render valuable service; they would “get the childishness knocked out of them,” and “come back into society with healthier sympathies and soberer ideas.” National service, in other words, would wean them away from martial belligerence in the process of putting belligerence to work. Government service programs would work a kind of cultural alchemy while improving America in material ways.

The military metaphor for combating the pandemic works in William James’s highly circumscribed sense. It connotes rallying popular sentiment for a colossal national enterprise aimed at defeating some nonhuman phenomenon that—like real warfare—could claim significant numbers of lives and beget untold misery. Citing the moral equivalent of war implies that the United States should again tap its youth, this time to palliate the spread of disease and speed the recovery process. Doubtless pandemic recovery would top James’s national-service agenda were he among the quick today.

It was an effective speech. In fact, “The Moral Equivalent of War” helped inspire Depression-era service programs like the Works Progress Administration and Civilian Conservation Corps. But danger is the companion to James’s noble vision. Politicking is what politicians do, and they like power—the more the better. Rousing the passions associated with war helps them convince the electorate to grant them extraordinary powers. Trouble is, such powers have a habit of remaining in place long after the emergency passes. Liberty suffers. Imbuing peacetime endeavors like combating a pandemic with wartime urgency thus poses acute peril. After all, wars come and go. So do wartime emergency powers. Moral equivalents of war—wars against disease, poverty, and so forth—could last forever. Liberty would suffer forever.

Superempowered politicians, then, could constitute the pandemic’s most persistent legacy. Let’s apply the war metaphor accurately, acknowledging its merits and drawbacks. And let’s ask tough questions before going along with the latest scheme put forth in Washington.