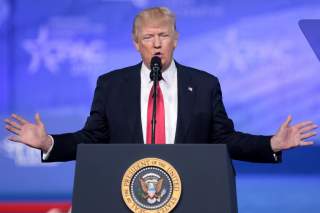 Is this the Trump administration or is it morphing into the Pence administration? Increasingly, in foreign policy at least, it is looking like the latter--an establishment Republican approach that is rooted in the past. The signs are everywhere. Partly in response to indignation on Capitol Hill from Senators such as John McCain and Lindsey Graham, President Trump is rapidly shifting his rhetorical stance on Syria. A few days ago intervention was out; now it appears that some form of military measures in Syria are in. Personnel changes are taking place as well. Steve Bannon is out and Nikki Haley is in at the National Security Council. The reshuffle of the the NSC’s principals committee suggests a White House adopting a more conventional structure for national-security deliberations, and there is a sharp contrast between Haley’s rise and what many in the media are reporting as Bannon’s fall.

Bannon’s initial appointment to the principals committee was met with outrage; his inclusion was said to politicize foreign policy. In fact, while Bannon had been given a larger role than political advisers in previous administrations, this was more an evolution than a revolution in the politics of the NSC: under President Obama, political aide David Axelrod had also attended meetings of the principals committee, though he was not a regular member or participant. Bannon had a greater role, but the NSC’s drift toward including political advisers had already begun.

White House sources cited by the New York Times and other outlets say that Bannon was only on the committee to keep watch over Michael Flynn’s works as national security adviser and to “de-operationalize” the NSC after the Obama years. With Flynn gone and the last administration now a fading memory, there was no reason for Bannon to remain. Yet Flynn’s replacement, H.R. McMaster, has clearly intended from the start to reorient the NSC in a more conventional direction. To that end, not only is Bannon gone, but the chairman of the Joints Chiefs of Staff and the director of national intelligence have been restored as “regular attendees,” rather than ad hoc presences, on the committee. According to the national security memorandum announcing the changes in the Federal Register, the director of the CIA, the secretary of Energy, and the U.S. representative to the United Nations have also been added.

The reorganization comes as the representative to the UN, former South Carolina governor Nikki Haley, appears to be gaining prominence within the administration as well as in the public eye. This week Politico ran a story heralding her as having “eclipsed the secretary of state as the country’s leading voice on foreign affairs.” Eliana Johnson’s report contains a great deal of praise for Haley and her role from former George W. Bush administration officials, with one such anonymous source saying, “She thinks she’s operating completely independently” of Secretary of State Rex Tillerson and another claiming that “She’s perfectly positioned to inherit the State Department.”

Haley has this week called on the UN to approve a resolution condemning the government of Bashar al-Assad for using chemical weapons. She’s said of Moscow’s resistance to the move, “How many more children have to die before Russia cares?” President Trump, meanwhile, has told reporters, “It’s very, very possible, and I will tell you it has already happened, that my attitude toward Syria and Assad, has changed very much.”

These developments may all be unrelated, but their net effect is to reassert the Washington foreign-policy consensus over what had, until now, appeared to be a fundamental shift in national-security strategy. Trump came into office with the prospect of thawing relations with Moscow, over the objections of Russia hawks in media and think-tank world. Trump set a new course in the Middle East as well, prioritizing the defeat of ISIS, in place of Obama’s strategy of attempting to undermine Assad and ISIS at the same time. Countering radical Islamism by destroying ISIS and clamping down on immigration from hot spots of extremism was a distinctly different strategy from the one pursued by Obama or the one advocated by neoconservatives and humanitarian interventionists. To change U.S. policy so profoundly, the Trump administration had to weather political attacks from the mainstream media, Democrats, Republican hawks, and much of the national-security establishment.

Bannon appeared to be a key player in this struggle, as the architect of immigration restriction and the chief ideologist of “America First.” Recent weeks, however, have been marked by setbacks on every front of the ideological fight. Immigration restrictions have been frustrated by the courts, while rapprochement was Russia has been politically complicated by investigations into whether Trump campaign officials last year had improper dealings with Russian officials. In domestic matters, the administration found itself in a difficult position over repealing and replacing Obamacare: to many conservative activist organizations, the White House seemed to be on the side of the Republican establishment in pushing an unsatisfactory bill, which was ultimately withdrawn when it failed to garner enough support in the House from moderates or conservatives.

Each setback creates a new opening for Trump’s opponents to press the attack. They are aided by the presence in Trump’s administration of Republicans who, though they may serve the president, fundamentally agree with the old way of doing things and would like to see the president renew the Washington consensus rather than overthrow it. There are grave dangers in this direction, however. George W. Bush and Barack Obama both failed to advance American security by following the standard Washington playbook. Each was a disaster in foreign policy. President Trump is not in a position to improve on their performance with the same strategy—for one thing, he does not enjoy the popular support that Bush and Obama did, and what support he does have comes from voters who want America’s economic interests and cultural cohesion to rank first on the president’s agenda. For Donald Trump to pursue policies that might have come from Hillary Clinton or Jeb Bush would be catastrophic both strategically and politically. Yet the pressure on Trump to conform will continue to grow.

The changes at the NSC and in the apparent fortunes of Bannon and Haley do not necessarily portend the end of Trump’s transformative agenda. They do, however, show what difficulties that agenda was always certain to face when it could only be implemented either by staff who had very little experience in government or by those whose experiences have made them highly skilled but relatively conventional in thinking. The price of experience is conformity.

To succeed, the Trump administration needs both expertise and originality. Those qualities rarely coincide, and it would take time for any administration to develop the right mix and then fuse those attributes together. While the process takes times, however, and necessarily runs into setbacks, those who would like to turn the this White House into a replay of the George W. Bush administration have ample opportunities for mischief.