Why Trump Needs to Make Strategic Investments in the U.S. Military 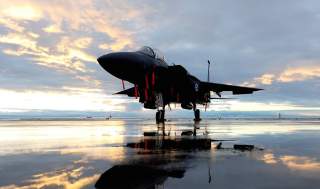 The seemingly shocking numbers are grabbing attention: a defense spending increase near 10 percent. But the reality is, increased spending is overdue. The global role of the United States requires a strong U.S. military with ready forces and modern equipment—a military that is prepared to counter multiple, simultaneous threats.

Since the Budget Control Act passed, Defense Department funding has been substantially reduced from the 2012 budget created by former Secretary of Defense Robert Gates. In that same five-year period, the international security environment has undergone significant changes. The continuing threat from the Islamic State, a revanchist Russia and a rising China have all placed pressure on the United States to maintain a high operational tempo, as well as sustain its technological superiority.

Lamenting the negative implications of sequestration has become a broken record in Washington, DC. It is a constant of any Department of Defense hearing before Congress. But the argument is not one of parochial interest in more funding or fewer strings, it’s a real concern. In 2013, the first year the Budget Control Act caps were in place, resulting cuts disproportionately impacted military readiness.

Today, readiness challenges pervade each service. Only half of all naval aircraft are airworthy, while only 38 percent of the Navy’s F-18 fighter jet inventory is available. Extended maintenance timelines and the lack of available Air Force aircraft have decreased the number of flight hours each Air Force pilot receives—below the minimum requirements for peak performance. The problem is not just about getting pilots in the air for kicks. Insufficient flight time can be dangerous and cause avoidable, but deadly, accidents, such as the many that have affected the U.S. Marine Corps. Similar to the reduction in Navy and Marine flight hours, funding for Army Combat Training Center rotations has decreased since 2012. Only three of the Army’s fifty-eight brigade combat teams could immediately deploy to a war zone. Another third could be deployed within thirty days—potentially too late to matter in a crisis.

The budget topline is just one piece of the defense-budget puzzle that the administration needs to address. Using this money wisely and pursuing DoD reforms to help streamline the acquisition process will help the United States best undertake its global responsibilities. Further, improving readiness and growing the capability necessary for future engagements requires strategic investment.

For too long, needed modernization has been avoided, which has resulted in a coming bow wave of critical modernization that is too often pushed out by short-term requirements. Modernization funding has plummeted since the 2012 budget. It is not possible to indefinitely extend the lifecycles of platforms without replacing them and attempts to do so lengthen maintenance cycles, further impacting readiness.

The United States has global responsibilities across a range of conflicts: from low-end conflicts such as those against the Islamic State and reemerging gray-zone challenges to the high-tech threat from near-peer competitors. Building a force capable of responding to all of these threats requires a high-low mix of limited numbers of advanced weapons systems and larger quantities of lower-cost platforms. Increased capacity ensures global-presence operations can help sustain global security, while capability keeps the U.S. military at the cutting edge of battlefield technology—making sure our soldiers, sailors, airmen and U.S. Marines never face a fair fight.

President Trump’s proposal falls below the $640 billion budget proposed by Senate Armed Services Committee chairman John McCain in a defense white paper issued in January. McCain advocated for increased spending to repair Budget Control Act damage, as well as to improve U.S. military capabilities for the future. “Just stemming the bleeding caused by recent budget cuts will take most of the next five years, to say nothing of the sustained increases in funding required thereafter.” His budget notably focuses on a high-low mix, for example investing in both the advanced F-35 fighter jet, as well as hundreds of light-attack fighters. This approach keeps the U.S. military prepared for whatever conflict arises.

The high rate of defense spending compared to other countries leads some, including Sen. Bernie Sanders, to argue it should not be increased. However, none of the “next eight countries combined” cited here are responsible for the global network of alliances that the United States maintains. In fact, four of those eight countries rely on the U.S. military to support their foreign policy or for their security. The role the United States plays in the world requires it to have a global presence, to secure sea lanes and global commons, and to be capable of responding to multiple, simultaneous threats. Further, technological advances continue among the country’s near-peer competitors, and the theft of intellectual property decreases the cost other states pay to achieve parity, both of which require continued modernization. Allowing other states to closely challenge U.S. military capabilities fundamentally changes the international order as it has existed since the end of World War II. To prevent this, the U.S. military must be ready to respond to a range of threats that vary in type from counterinsurgency to conflict against high-tech adversaries. Finally, the U.S. military seeks to play the “away game” and challenge potential adversaries away from U.S. borders, which requires the ability to project power across oceans. Others only have to deny such advances.

Unpredictability is a constant in war—it’s why professionalism, training and preparedness are what make the difference on the battlefield. Low funding prevents needed maintenance, modernization and training. Budget unpredictability complicates the long-term planning necessary to be prepared to deter adversaries and defeat enemies. Secretary Gates has argued that the U.S. military has a perfect record of predicting military engagements—never. In this light, the Defense Department should be as prepared as it can be. As Army Chief of Staff Gen. Mark Milley has said: “The only thing more expensive than deterrence is actually fighting a war, and the only thing more expensive than fighting a war is fighting one and losing one.” The proposed increase in defense spending is justified. The tricky part is investing it properly for the future.

Lauren Fish is a Research Associate at the Center for a New American Security.