Why Trump Is Right about Immigration 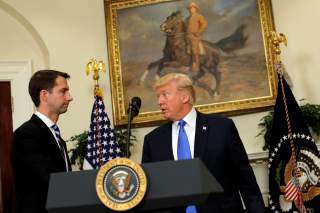 For the past two years, ever since Donald Trump’s escalator ride, the immigration debate has focused on enforcement and illegality. The wall, criminal aliens, deportation, Obama’s lawless executive amnesty—it’s been all illegal immigration, all the time.

And that’s as it should be, at first, because if the rules aren’t enforced, it doesn’t much matter what the rules are.

But in the long run the more important questions are: What are the rules? How many people should the federal immigration program admit each year? How should they be selected? How can we minimize the harm from the program while maximizing the benefits?

Senators Tom Cotton and David Perdue have started to answer these questions. They joined President Trump at the White House this morning to unveil legislation to restructure and modernize the federal immigration program. The Reforming American Immigration for a Strong Economy Act (RAISE Act) resumes the effort undertaken by civil rights icon Barbara Jordan’s U.S. Commission on Immigration Reform in the mid-1990s. Two decades ago, the corporate Right allied with the cultural Left to kill Jordan’s recommended immigration changes. But the logic of those changes didn’t go away. And today’s announcement picks up where she left off.

The Cotton-Perdue bill makes a number of significant changes to the current program. First, it focuses family immigration more narrowly. Currently, two-thirds of the million-plus foreign citizens who get green cards (i.e., permanent residence that can lead to citizenship) each year qualify only because they have relatives already here. This nepotistic system does not screen for skills or education. It also drives chain migration, as each cohort of immigrants sponsors the next one.

The RAISE Act would limit family immigration rights to the actual nuclear family: husbands, wives, and little kids of American citizens and legal residents. The current categories for adult siblings, adult sons and daughters, and parents would be retired. U.S. citizens could still bring in their elderly parents in need of caretaking, but only on renewable nonimmigrant visas (no green cards or citizenship) and only after proving that they’ve paid for health insurance up front.

The second major element in this restructuring addresses the employment-based immigration flow. It is now a jumble of categories and subcategories, the main result of which is to provide steady work for immigration lawyers. The Cotton-Perdue bill would rationalize this mess by creating one, streamlined points system, along the lines of similar schemes in Canada and Australia. Points would be awarded to potential candidates based mainly on education, English-language ability and age, and those who meet a certain benchmark would be in the pool for green cards, with the top scorers being selected first.

The bill would also eliminate the egregious Diversity Visa Lottery and cap refugee admissions at fifty thousand per year, rather than allow the president let in as many as he wants, as is the case today.

The level of immigration—now running at over a million a year—would likely drop by 40 percent, and then drop some more over time, as the number of foreign spouses declined. (Most U.S. citizens marrying foreigners are earlier immigrants, so as they age, and fewer new immigrants come in behind them, the demand for spousal immigration is likely to fall.) That would still mean annual permanent immigration of 500,000–600,000 a year, which is more than any other nation.

The bill isn’t perfect. It leaves the level of skills-based immigration, for instance, at the current 140,000 a year—the world doesn’t generate 140,000 Einsteins annually. It preserves a category for the spouses and minor children of green-card holders, which I don’t think is justified. (That relates to spouses acquired after immigration; if you’re married at the time you get your green card, your spouse automatically gets one too.) And I don’t think there’s any justification for resettling even fifty thousand refugees (as opposed to helping a far greater number at the same cost in the countries where they’ve taken refuge).

Neither does this bill address so-called temporary immigration, where businesses import cheap labor—both higher- and lower-skilled—to make an end-run around the American labor market.

But these are quibbles. With the RAISE Act, Senators Cotton and Perdue have done an exceptional job of restarting the debate over the shape of the federal immigration program. And President Trump is to be praised for moving beyond the easy issue of enforcement. As Cotton said at the White House event today, our current immigration program is “an obsolete disaster.” Fixing it to admit fewer unskilled workers, phase out chain migration, and simplify the admission of truly exceptional talents would be an enormous accomplishment.