Why Trump Is Right about North Korea 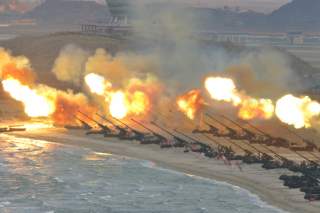 How far will Kim go?

Keeping in mind Kim’s three prerogatives, test-launching a nuclear-tipped ballistic missile is not in keeping with his survivalist aims. Because President Trump has never articulated his red lines, Kim Jong-un has no clear understanding of what will bring upon the wrath of the U.S.-led coalition. A nuclear test over the Pacific Ocean could give President Trump the justification to order a preemptive decapitating strike against Pyongyang—and following such a significant escalation by North Korea, Beijing likely would do little to interfere. Kim Jong-un is unlikely to risk his dynasty in retort to President Trump’s statements just to show his prowess.

At the same time, Kim has seen what happens to world leaders who cede their nuclear ambitions—Libya, Ukraine and Iraq provide stark reminders of where that road leads. And now, Kim is ostensibly achieving one of his goals: nuclear weapons and cyber warfare have brought North Korea to the center of the world stage. He will not easily relinquish his bargaining chip.

So for the time being, North Korea and the United States are locked in a stalemate.

The key to a peaceful resolution is China. Nearly 80 percent of all black-market products in North Korea come from China. Without this flow of illicit items, the North Korean “free” markets come to a standstill. Additionally, Chinese and Russian telecom companies provide the only links between North Korean cyber actors and their targets. In order to truly cripple Kim Jong-un, the Trump administration needs to persuade China to cut off North Korea’s access to both black-market items and the internet. Without web access, Kim loses the revenue stream provided by his cyber army. President Trump’s fiery rhetoric has emptied Pyongyang’s hourglass; now is the time to empty its coffers.

The added benefit of cutting North Korea off from the internet is removing its only real threat to the U.S. homeland: cyber warfare. At this point, Kim has the ability to launch a cyberattack against the United States without fear of international condemnation and the certain reprisal that would come with a kinetic strike. Remove that option, and Kim is left with the choice to capitulate and negotiate, or to continue launching his missiles and stand alone against the fury of the United States.

In order for North Korea to come to the negotiating table and be treated as an equal by China and the United States, Kim Jong-un needs to take positive steps to defuse tensions. To do this without appearing weak to his populous or to his military is no easy task; however, Kim Jong-un has an opportunity to signal he is ready to make that leap.

Without nuclear disarmament, the threat Pyongyang poses to Seoul is too great for the United States to allow. On the other hand, even without a nuclear weapon, the amount of artillery North Korea has amassed along the Demilitarized Zone could kill hundreds of thousands of South Koreans. If North Korea alters its current collision course, then Kim’s propaganda machine may be able to portray him as the great protector of North Korea while de-escalating tensions internationally. But such a feat could only be achieved if Kim ordered a pause to ballistic-missile tests and opted instead to conduct a major military exercise focusing on offensive artillery drills. This type of positive step could signal Pyongyang’s willingness to begin negotiations.

However, until North Korea takes that first step towards a peaceful resolution, the Trump administration’s antagonistic approach before North Korea has the ability to detonate a nuclear warhead over the United States is America’s best avenue to ensure U.S. national security.

Michael McLaughlin is a Naval Intelligence Officer at United States Cyber Command. His foreign tours of duty include multiple postings to the Far East, the Middle East and Europe. The views and opinions expressed in this paper and/or its images are those of the author alone and do not reflect the official policy or position of the U.S. Department of Defense (DoD), U.S. CYBERCOM, or any agency of the U.S. government. Any appearance of DoD visual information or reference to its entities herein does not imply or constitute DoD endorsement of this authored work, means of delivery, publication, transmission, or broadcast.

Image: Artillery pieces are seen being fired during a military drill at an unknown location, in this undated photo released by North Korea's Korean Central News Agency (KCNA) on March 25, 2016. REUTERS/KCNA/File Photo