Why Trump Should Not Appoint Elliott Abrams 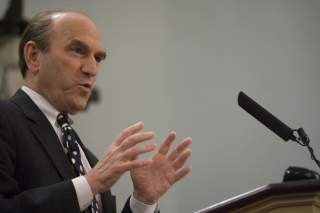 After a news report out this week that President Donald Trump’s team is zeroing in on former NSC official Elliott Abrams for the Deputy Secretary of State position, it’s not illogical to think that what is left of the #NeverTrump movement may be feeling a moment of relief. Abrams is a prominent neocon and served as assistant secretary of state for Inter-American Affairs during the Reagan administration and as Middle East director on George W. Bush’s National Security Council staff. Abrams cut his teeth in politics working on Capitol Hill, where he served on the staffs of Sen. Henry M. “Scoop” Jackson and Sen. Daniel Patrick Moynihan. Jackson was a fierce critic of detente with the Soviet Union and many neocons served on his staff. Moynihan, too, was a neoconservative throughout the 1970s but moved to the left in the 1980s when he attacked the Reagan administration.

By the Reagan years, Abrams, like not a few neocons, abandoned the Democratic party to join the GOP and the administration. Now, as a senior fellow at the Council on Foreign Relations and as a regular contributor to the Weekly Standard, Abrams has spent much of the previous year pointing out where Trump has gone wrong on foreign policy, why his positions are dangerous to America’s exceptional character and global power, and why other foreign-policy luminaries like him would be mistaken to support him. If the #NeverTrump crowd currently shut out of the Trump administration is happy about the Abrams news, it’s because Abrams is one of them.

A far better candidate would be Paula J. Dobriansky, the undersecretary of global affairs at the State Department during the George W. Bush administration. Dobriansky, who never signed any of the national-security letters denouncing Trump, is said to be the other chief administration candidate for the number-two post at State. She is a lifelong Republican, a seasoned foreign-policy expert, a skillful diplomat and widely respected. Having served in five presidential administrations, both Republican and Democratic, she epitomizes the idea of government service.

The contrast with Abrams could hardly be starker. Given that Trump places a premium on loyalty, it’s more than a little surprising that he would allow his national-security team to vet and put on a shortlist Abrams, who told Voice of America during the heat of the GOP primary campaign that Trump’s foreign policy is incoherent and confusing. “[Trump] has no appreciation whatsoever of the importance of allies and alliances,” Abrams commented to VOA. “All he does is insult them all the time and say they’re not doing enough, and it worries many of the allies in Asia and the Middle East and Europe.” In fact, Abrams was so concerned about Trump winning the Republican nomination that he wrote a piece in the May 16 edition of the Weekly Standard offering up some advice about what anti-Trump candidates could do to make his ascent more difficult. The article was called “When You Can’t Stand Your Candidate.”

Abrams began by reminiscing about how he disliked both George McGovern and Richard M. Nixon in 1972. The clear implication is that he voted for neither. According to Abrams, the lesson of the Democratic Convention for contemporary Republicans meeting in Cleveland was obvious: “Do not allow the Republican convention to be a coronation wherein Trump and Trumpism are unchallenged. There’s no reason others who won many delegates, from Rubio to Cruz to Kasich, should not have their names put in nomination. The party needs to be reminded that there are deep divisions, and Trump needs to be reminded of how many in the party oppose and even fear his nomination.” Another lesson that he drew was that Republicans should waste no time moving to purge themselves of any remnants of Trump after the election: “seize the party machinery back immediately after the Trump defeat.”

On May 12 on JBS News, Abrams amplified his disdain for Trump. Questioned about his stance on Trump, he told interviewer Mark S. Golub that it was “a question of character and fitness to be commander-in-chief.” He added, “you don’t change your spots at the age of 70.” Later in the interview he referred to Trump’s “absolute unwillingness to learn anything about foreign policy.” Golub asked him if underneath he really wanted Hillary Clinton to win: “I am not gonna vote for either of these two people,” he declared.

Like all presidents in American history, President Trump has the right and privilege to vet anyone he wants. But he should know what he’s getting himself into.

In case the president and his staff aren’t aware or have simply forgotten, Elliott Abrams was in the middle of the Iran-Contra firestorm that engulfed the Reagan administration and nearly brought down the Republican icon’s presidency. While he wasn’t the principal figure in providing weapons to the Nicaraguan insurgency à la Oliver North, Abrams was one of the fundraisers in the State Department at the time who informed Secretary of State George Schultz that the Sultanate of Brunei was a good source of cash for the contras. Brunei would eventually contribute $10 million to the resistance in Nicaragua, and Abrams kept Congress in the dark about the transaction. When asked by the Senate Foreign Relations Committee about reports that the Reagan administration was involved in the Contra resupply effort, Abrams withheld information about U.S. activities and essentially lied to Congress by stating that the White House wasn’t encouraging third-party governments to send money to the Nicaraguan resistance.

Abrams would later plead guilty in 1991 on two misdemeanor counts of withholding information from Congress. As a Los Angeles Times article would describe at the time, “Abrams strode briskly to the bank of microphones, nodded to reporters, and said that he believed at the time that the activities on which he testified in 1986 were ‘proper and lawful.’” If he demonstrated any acknowledgment that what he did was wrong, it was overshadowed by his firm belief that support to the Contras was vital to the national-security interests of the United States in Latin America. A year later, on December 24, 1992, President George H. W. Bush would pardon Abrams for his role in the entire affair.

Who knows if Abrams will ultimately be tapped as the State Department’s number-two official? Everything is in flux during the opening weeks of a new administration, particularly when the speculation involves upcoming personnel decisions that may or may not happen. The Washington Post report could just be a trial balloon to gauge the reaction of an Abrams appointment, or it could be an attempt to smooth over any opposition on Capitol Hill before a formal announcement is made, and the former Reagan and Bush official has to appear in front of the Senate Foreign Relations Committee—ironically the same committee that Abrams misled three decades prior.

But if Trump indeed formally nominates Abrams, he will be promoting a man who has shown a willful disdain of congressional overseers to the point of being convicted on charges coming close to perjury. Can President Trump be assured that Abrams would be able to withstand the scrutiny during his confirmation hearings? And more importantly, is the neoconservative, unilateral interventionism that Abrams has advocated for throughout his career—and that led directly to the second Iraq War—the kind of foreign-policy doctrine that President Trump wants in his State Department?

Image: Elliott Abrams speaks at the Miller Center at the University of Virginia. Flickr/Creative Commons/Miller Center