Why Trump Should Support a Kurdish State 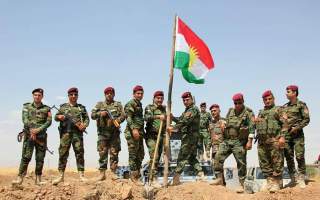 Some believe that the Trump administration will finish off the ISIS caliphate and then withdraw American forces from much of the region. Others hope it will reassert the American role in the Middle East and push back against Iran and Russia. In either case, the United States should support a Kurdish state. True, such a move will run into opposition from the governments in Baghdad and Ankara. However, the Kurds have more than earned the right to independence. Moreover, such a move will help reassure other U.S. allies in the region, in Europe and in Southeast Asia that the United States will stand by them rather than abandon them, as the United States has done repeatedly to the Kurds in the past.

The time has come to redraw the map. Iraq’s borders were forged by the colonial powers at the end of World War I, throwing the Kurds in with other ethnic and confessional groups, with whom they have little in common. Ever since, the Kurds have been fighting for the right to govern themselves, to the point that even the tyrannical government of Saddam Hussein granted them a high level of autonomy.

At the same time, the United States often finds itself supporting nations or groups of fighters in the Middle East who make for rather dubious allies. It supported the mujahideen in Afghanistan, which turned into the Taliban. The rebels the United States supported in Libya committed about the same level and kinds of atrocities (including ethnic cleansing) as the Qaddafi forces. The Shia dominated government of Iraq has used U.S.-trained and equipped forces as death squads against the Sunnis. The Free Syrian Army is a motley crew of defectors from the Syrian Army, many of whom would then go on to join the Nusra Front. Most of these forces turned out to be rather feeble fighters and rather unreliable allies.

In sharp contrast, the peshmerga, the Kurdish forces, consistently proved themselves to be a very effective fighters. Rep. Ed Royce, the chairman of the House Foreign Affairs Committee, pointed out in December 2015, “The Kurds are the sole US allied force operating on the ground against ISIS in Syria and Iraq. . . . For the last year and a half, we've had one effective fighter in this fight: It is the 160,000-strong Peshmerga force.” Michael O’Hanlon and Ömer Taşpınar observed that the Kurds “appear to be the only element of the so-called moderate opposition gaining any real traction, or showing any real military competence, within Syria.” Moreover, Kurdistan was the one part of Iraq where the United States suffered no casualties since the invasion in 2003, a place U.S. troops could go for their R&R breaks during the meandering decade and a half of civil war.

Although Western media frequently refers to the peshmerga as a united force, loyal to the Kurdish Regional Government, most peshmerga belong to one of the two main political parties in Iraqi Kurdistan: the Kurdish Democratic Party (KDP) and the Patriotic Union of Kurdistan (PUK). The two parties fought a civil war between 1994 and 1998. The parties still control different areas within Iraqi Kurdistan; the KDP dominates the region around Erbil (and has Turkish support), while the PUK area is centered around Sulaymaniyah. Indeed, each of these two major groups contains splinter groups with their own leaders and commanders and loyal fighters. One cannot predict if, after decades of oppression, the Kurds will rise to the occasion if given a chance to form their own state, not to mention find a sufficient level of unity to agree on the foundations of such a state and how it is to be governed. Some people use such a “constitutional moment” to curb their differences; others let it slip away. However, the Kurds deserve a chance to make that decision for themselves.

Supporting a Kurdish state raises a whole host of challenges; there is nothing simple in the Middle East. First, such a move will antagonize the government in Baghdad. Indeed, one reason the United States was so slow in arming and financing the Kurdish forces, despite their dedicated fighting against ISIS, was the legalistic notion that such assistance has to come via the national government. (A U.S. court blocked the Kurds’ independent sale of oil for similar reasons). However, the Baghdad government has continuously disregarded the United States’ urging to form an inclusive government and instead has continued to be mainly a government for the Shia by the Shia, under growing Iranian influence. Its displeasure is not a sufficient reason for the U.S. to refuse to support a Kurdish state.

The Turkish opposition is surely going to be fierce. The Turks fear that a Kurdish state on their borders will embolden the Turkish Kurds’ quest for autonomy, if not for a secession in order to join the new Kurdish state. And the Turks consider a major part of the Kurdish forces to be a terrorist organization. In the past, the United States tended to support Turkey rather than the Kurds, because it considers Turkey a major ally, a NATO member and a country that provides U.S. bases.  The United States agreed to label the PKK a terrorist organization.

Recently, two days after Turkey agreed to let the United States use air bases to launch strikes against ISIS, Turkey bombed PKK positions in Iraq and later deployed troops there. The United States and its allies had very little to say about these gross violations of international law. Much of the problem stems from Turkey’s extreme oppression of its Kurdish population. For decades, Ankara made it illegal for Kurds to use their own language, attempted to erase Kurdish culture, to deny their distinct identity by classifying them as “Mountain Turks,” and banning the words “Kurdish” or “Kurdistan.” (When an MP spoke Kurdish, she was charged with treason and sentenced to fifteen years in prison.) In response the Kurds rebelled, were severely punished by Turkish authorities and resorted to terrorism led by the PKK. In 2013 the PKK agreed to a truce with the Turkish government, but in July 2015, after Turkey bombed Kurdish targets in Iraq and Syria, the PKK withdrew and announced a new drive against the government. The new U.S. administration would do well to urge the Turks to grant its Kurds autonomy in return for a commitment by the PKK to cease all terrorist acts.

If the war in Syria winds down, surely there are going to be some realists who will argue that the United States should side with the Turkish and Iraqi governments, whose partnership the United States will need in the future, and neglect the Kurds. This would not only be a moral failure, but also an unwise policy. U.S. allies all over the world are watching. They will see in the way the Washington treats the Kurds when the fighters are no longer needed, as a litmus test of the extent to which they can trust the United States to stand by them if they take risks too in support of American policies in dealing with Iran, Russia, and China.

Amitai Etzioni is a University Professor and Professor of International Relations at The George Washington University. His latest book Foreign Policy: Thinking Outside the Box, was recently published by Routledge for Chatham House’s series “Insights.” Follow Amitai Etzioni on Twitter: twitter.com/@ICPS_GWU.