Why Trump Is Waiting to Pardon Roger Stone 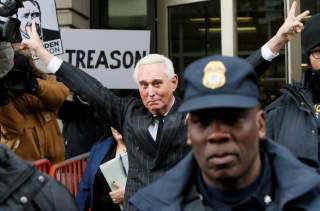 With two rows of supporters in a courtroom awaiting him, Roger Stone, the longtime political operative and personal friend of President Donald Trump, strolled in wearing a black Homburg and a blue overcoat with a dark velvet collar to hear his sentence from federal judge Amy Berman Jackson, an Obama appointee. It was forty months in prison and a $20,000 fine for the crimes of obstruction, witness tampering, and making false statements to Congress. Whether Stone actually heads to prison remains an open question: his attorneys are moving for a new trial even as Trump floats the prospect of a pardon for him. Stone (who turns sixty-eight later this year) remained resolutely silent in the courtroom, a remarkable feat for someone who has made a career out of taunting the liberal establishment with progressively more provocative capers.

Stone, who has known Trump in a personal capacity since the 1980s, became a target of former special counsel Robert Mueller when it was alleged that he was the middleman between the Trump campaign and the media publisher Wikileaks. It was the prosecutor’s theory that Stone had foreknowledge of Wikileaks’ information dumps regarding the Democratic National Committee’s emails. This was never proven; however, Stone was convicted in November 2019 on multiple procedural crimes.

Last week, controversy erupted when federal prosecutors announced a sentencing recommendation of seven to ten years, and Trump responded that “this is a horrible and very unfair situation” and that such a “miscarriage of justice” cannot be allowed. When the Justice Department announced that this recommendation went beyond their original expectation and would be revised down, four members of the prosecution team resigned.

The move was perceived by some as blatant interference by the president in a criminal case for the benefit of a close associate. Several Democratic lawmakers referred to the tweet as an instance of obstruction of justice. Republican Senator John Kennedy cautioned, “Just because you can sing, though, doesn’t mean you should sing." Attorney General William P. Barr, in an attempt to assuage concerns, made it known that the president had had no influence on the recommendation and that the decision to lower it had been made prior to his tweet. Three prosecutors resigned from the case the same day in response.

Despite official assurances, the appearance of wrongdoing was noted. “To have public statements and tweets made about the department, about people in the department…about cases pending in the department, and about judges before whom we have cases, make it impossible for me to do my job and to ensure the courts and the prosecutors in the department that we’re doing our work with integrity,” Attorney General William Barr told ABC News. Since the interview, Trump has continued to tweet about DOJ conduct, and there is talk about Barr resigning.

Since the uproar, media outlets have taken a closer examination of the Stone trial and found discrepancies. The primary one is that the jury forewoman, Tomeka Hart, is a former Democratic congressional candidate who had made political social media posts, some of them relating to Roger Stone and the Mueller investigation. Hart, who is trained as a lawyer, would have been aware that her involvement would likely violate Stone’s constitutional right to be tried by twelve impartial jurors.

A number of conservatives have complained that presiding Judge Jackson’s imposition of a gag order on Stone, even after his conviction, is a sign of unfair treatment. One of Stone’s primary sources of income had been public speaking. The gag order has prevented him from speaking publicly on the aftermath of his trial.

Judge Jackson called out both Trump and Barr in a lengthy statement before revealing the sentence, saying that Stone was being “prosecuted for covering up for the president” and that Barr’s decision to lower the original prosecutorial recommendation was “unprecedented.”

“The dismay and disgust at the defendant’s belligerence should transcend party,” the judge said.

Despite some overwrought speculation in the Washington Post and elsewhere that he would intervene immediately, Trump said in Las Vegas that he has no immediate plans to either pardon or grant clemency to Stone, instead preferring to see “the process play out.” If a pardon is issued, then it is likely to happen after the November election when it would no longer be a political liability for Trump. Trump is loyal to his allies—up to a point. That point is when his interests conflict with theirs.