Why Trump Wants to Audit the Pentagon 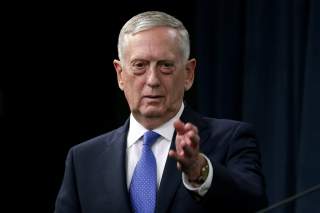 It’s a figure some Republicans used on the House floor when seeking to block the military from funding for such treatments with amendments to Defense Department appropriations bills. Essentially, for some lawmakers, the issue is more about fiscal prudence than physical change, especially at a time when the military is having problems paying for weapons and body armor for soldiers.

The weekend prior to the announcement, Trump spoke in Newport News, Virginia, at the commissioning ceremony for the USS Gerald R. Ford, about ditching the defense sequester. The sequester involved across-the-board federal agency cuts that disproportionately hit the military.

“Sequester—not good. This has led to deferred maintenance, a lack of investment in new equipment and technology, and a shortfall in military readiness,” Trump said to a friendly crowd. “In other words, it’s been a very, very bad period of time for our military.”

Trump noted his budget request asked to boost the military’s budget by $54 billion.

“Now we need Congress to do its job and pass the budget that provides for higher, stable and predictable funding levels for our military needs that our fighting men and women deserve—and you will get, believe me,” Trump said.

The House and Senate majorities could likely give him the military boost, as most Republicans back a strong defense. But the days when GOP lawmakers near uniformly viewed every military dollar as sacrosanct have passed. The row over ensuring no money is spent on sex changes is but one example. Earlier this month, some Republicans in Congress tried and failed to strip funding for costly green biofuels for military—another form of liberal-social engineering that has little to do with fighting wars—from the National Defense Authorization Act.

Further, during the Virginia speech, Trump also talked about the need for acquisitions reform at the Pentagon, to save money on military equipment. That’s something that stirred up major defense contractors, and a rarity for a Republican. But, it’s an issue Trump was pushing even before his inauguration.

At one time, the notion of demanding an audit of the Pentagon would seem like a suggestion only from McGovernite retreads or the Paulite libertarians. In actuality, it’s not so radical and would put the Defense Department in line with what other very wasteful federal agencies are required to do.

The notion has bipartisan backing now and powerful allies. Grover Norquist, the president of Americans for Tax Reform, a leading voice on conservative economic policy, has thrown his support behind the Audit the Pentagon Act of 2017, sponsored by Texas Republican Rep. Michael Burgess and California Democrat Rep. Barbara Lee. The bill would require the Pentagon to be audit-ready the same way every other department is required to be audit-ready under the Chief Financial Officer Act of 1990.

Norquist has supported a lot of big ideas over the decades, but he has an “in” this time. His younger brother, David Norquist, is the new comptroller of the Defense Department. As Trump’s nominee to oversee the Pentagon’s finances, he told the Senate Armed Services Committee, “Let me address it directly: it is time to audit the Pentagon.”

Whether Grover influenced his powerful brother to push a fiscally hawkish policy or David influenced his famous brother to cast light on the issue, we don’t know. But, if Trump’s DOD comptroller is making this a priority, the Trump administration has made it a priority.

During the same May confirmation hearing, Norquist also said the Pentagon might not pass an audit the first time around—all the more reason not to delay.

“I recognize it will take time for the department to go from being audited to passing an audit,” David Norquist said. “Everything you have heard about the size and complexity of the department is true. And this legitimately makes any endeavor, including an audit, harder. But that is not a reason to delay the audit. That is a reason to begin.”

The Government Accountability Office determined in 2013 it couldn’t complete a full audit of the federal government because of, “serious financial management problems at the Department of Defense that made its financial statements unauditable.” A January GAO report made a similar assessment.

The Defense Department budget is more than $600 billion, but it still has real struggles. The Air Force for examples has reportedly had so many problems with maintaining aged planes that it has had to seek out used parts from a scrap heap, while the U.S. Marines actually had to remove old equipment from a museum and use it for aircraft maintenance.

In rolling out the president’s fiscal year 2018 budget proposal, Office of Management and Budget Director Mick Mulvaney emphasized cutting waste in other departments to pay for rebuilding the military. He didn’t tout a Pentagon audit, but the ideas of Trump’s Pentagon comptroller could fit well into the Trump and Mulvaney vision.

If the younger Norquist can make it happen without being forced by Congress, all the better.

The Burgess-Lee bill would require the Defense Department comply with the Chief Financial Officer Act of 1990 or face an automatic 5 percent cut. That could put national security at risk just for the sake of putting pressure on the military bureaucracy. Perhaps it would never come to that. Maybe it is something to bargain away to get the bill passed.

Also, to hold the massive Defense Department to the same bookkeeping standards as considerably smaller, albeit bloated, federal agencies across the government might be unfair.

Defense hawks might be correct to fear a Pandora’s box for dovish politician talking points. Often the biggest spenders in Congress demand just one government agency live within its means when the agency is tasked with defending the country. Audits could unearth such things as $700 coffee mugs and other incidentals that are tough to explain in soundbite, giving liberal Democrats and maybe libertarian-leaning Republicans an excuse to squeeze the DOD at budget time.

Cosponsor Lee could even be a case in point. She seemed almost disparaging of the DOD in pushing the bill.

“It’s simple: if the Pentagon can’t account for how they are spending taxpayer money, then they should not have a blank check from Congress,” Lee said during a late June press conference at the Capitol. “So let’s bring some common sense to the Pentagon and its half-trillion budget.”

Still, history tells us when the public gets outraged about government spending, they’re rightfully inclined to give the Pentagon some leeway, particularly considering all the sprawling waste throughout the federal government.

Burgess, the Republican cosponsor, stressed that the point of the audit isn’t to punish the Pentagon, but to make sure dollars are being spent to ensure it’s the strongest fighting force possible.

“President Trump wants to rebuild the military. I do too,” Burgess said. “The U.S. Armed Forces are an arsenal of democracy that is key to our freedom. No one can justify wasting the dollars that should be spent on our men and women in uniform, and the Audit the Pentagon Act of 2017 will ensure that we are able to efficiently and effectively support our military at home and abroad.”

There is good reason to believe the military’s culture of efficiency and sense of mission—literally dealing with life or death decision—would be far less wasteful than most of the federal bureaucracy. If this goes forward, then an audit might demonstrate that while still finding ways to make the military stronger.

Fred Lucas is the White House correspondent for the Daily Signal and author of Tainted by Suspicion: The Secret Deals and Electoral Chaos of Disputed Presidential Elections.

Image: U.S. Defense Secretary James Mattis gestures during a press briefing on the campaign to defeat ISIS at the Pentagon in Washington, U.S., May 19, 2017. REUTERS/Yuri Gripas.